Portland Sea Dogs outfielder Izzy Wilson has been named the Eastern League Player of the Week for the week of July 4-10, Minor League Baseball announced on Monday.

In Double-A Portland’s last series against the Binghamton Rumble Ponies at Mirabito Stadium, Wilson went 9-for-19 (.474) at the plate with two doubles, one triple, one home run, eight RBIs, seven runs scored, two walks, and two strikeouts over the course of games.

Wilson, 24, originally signed a minor-league deal with the Red Sox back in January after spending last season with the Angels organization. The 2022 campaign has not been all that kind to the left-handed hitter, who even after last week’s performance is batting just .160/.269/.278 (56 wRC+) with three homers, 16 RBIs, 24 runs scored, and three stolen bases through 51 games (186 plate appearances) for Portland.

Defensively, Wilson has seen the majority of his playing time with the Sea Dogs come in right field. The 6-foot-3, 190 pounder out of Sint Maarten has logged 310 1/3 innings in right while also making nine starts in center field. He has recorded three outfield assists, which currently is tied for the most on the Sea Dogs.

Wilson, who does not turn 25 until next March, becomes the second Sea Dog to earn Eastern League Player of the Week honors this season and joins the likes of Pedro Castellanos by doing so. He is eligible to become a minor-league free-agent again at the end of the year. In the meantime, he is presumably aiming to join Castellanos in Triple-A Worcester before the 2022 season comes to a close. 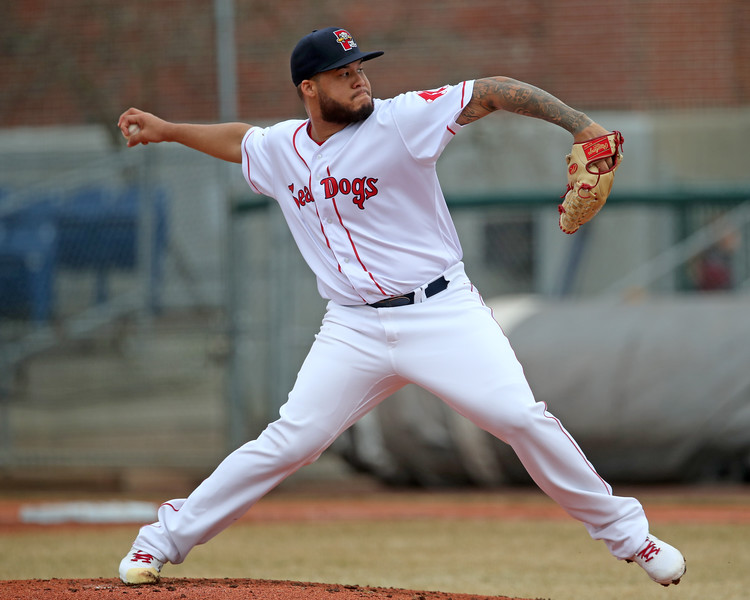 Red Sox pitching prospects Victor Santos and Juan Daniel Encarnacion have respectively been named the Eastern League and Carolina League Pitchers of the Week for the week of May 30-June 5, Minor League Baseball announced on Monday.

Santos made two appearances (one start) for Double-A Portland in its most recent series against the New Hampshire Fisher Cats at Delta Dental Stadium. In those two outings, the right-hander allowed one earned run on seven hits, three walks, and nine strikeouts over 12 total innings for the Sea Dogs.

Originally acquired from the Phillies last July as the player to be named later in the trade that sent C.J. Chatham to Philadelphia, Santos is currently regarded by SoxProspects.com as the 51st-ranked prospect in Boston’s farm system.

Per his SoxProspects.com scouting report, the 6-foot-1, 191 pound hurler from the Dominican Republic throws from a three-quarters arm slot and operates with a three-pitch mix that consists of a 90-92 mph fastball that tops out at 94 mph fastball, a 77-79 mph split changeup, and a 77-81 mph slider.

Santos, who turns 22 in July, can once again become eligible for the Rule 5 Draft this winter. Because of that, he could be a prime candidate to pitch in the Arizona Fall League later this year.

Encarnacion, meanwhile, also made two appearances (one start) for Low-A Salem in its latest series against the Columbia Fireflies at Carillion Clinic Field. Over seven cumulative innings of work, the righty allowed no runs on just four hits and zero walks to go along with seven strikeouts.

The Red Sox originally signed Encarnacion for $40,000 as an international free agent coming out of the Dominican Republic in September 2018. The San Pedro de Macoris native is not yet regarded as one of the premier pitching prospects in Boston’s farm system, though he certainly possesses intriguing potential.

Listed at 6-foot-2 and 173 pounds, Encarnacion throws from a three-quarters arm slot and works with a 90-93 mph fastball that reaches 94 mph, a 76-81 mph slider, and an 84-85 mph changeup, according to his SoxProspects.com scouting report.

Unlike Santos, Encarnacion — who does not turn 22 until next March — is not eligible for the Rule 5 Draft until the conclusion of the 2023 season. So there is still a ways to go there.

Despite not seeing any live pitching during the pandemic-induced shutdown period, Red Sox prospect Jarren Duran had himself quite the night in the Red Sox’ final intrasquad game of Summer Camp at Fenway Park on Monday.

Making the trek up from Pawtucket along with Jeter Downs and Josh Ockimey, Duran started in center field and hit out of the nine-hole for the Home Sox in Monday’s contest and went 2-for-3 with a pair of hard-hit doubles, the first of which drove in two runs off left-hander Jeffrey Springs in the second inning.

All aboard the Jarren Duran hype train. pic.twitter.com/NegcFikMOK

On the defensive side of the ball, Duran was just as impressive, as the Sox’ eighth-ranked prospect put his speed on full display while robbing Marco Hernandez of an extra-base hit off Martin Perez in the top half of the sixth.

That flash of the leather prompted Perez to tell reporters after the game that “[Duran’s] really good, man.”

As for what Duran himself thought about his performance, the 23-year-old led off by saying that it was “just surreal” to play at Fenway Park and that “he couldn’t stop looking around” the ballpark.

“I wasn’t really thinking,” Duran added when speaking to reporters via Zoom. “I missed baseball so much. It was an honor just to be here.”

Before spring training was suspended due to the COVID-19 pandemic in March, Duran was opening up eyes around Red Sox camp as it looked like he was going to start the year with Double-A Portland.

Instead, the 2020 minor-league season was eventually cancelled last month, and Duran, like so many other prospects across baseball, lost the chance to continue to hone his craft in actual games.

Still, the southern California did not view that cancellation as a massive road block and instead opted for a more optimistic outlook on things.

“I think it just depends on how bad you want it,” he said. “We have the resources to push ourselves.”

For Duran, those resources were made available at Long Beach State, his alma mater, where he hit during the layoff before the Angels took over the facility for their own workouts.

Because there will be no organized minor-league baseball at all in 2020, Duran will likely spend his second professional season as a member of the Red Sox organization in Pawtucket at the club‘s alternate training site, otherwise known as McCoy Stadium.

The former Dirtbag was taken by Boston in the seventh round of the 2018 amateur draft and is regarded by FanGraphs as the second-fastest prospect in the Sox’ farm system behind only Gilberto Jimenez.

“How do you do that?” Roenicke asked rhetorically. “You sit for 3 1/2 months and you come back right where you left off. If he figures it out he’s going to be some kind of player.”

This news does not come as a surprise, but the 2020 Minor League Baseball season has been cancelled due to the ongoing COVID-19 pandemic in the United States. MiLB released a statement addressing the matter earlier Tuesday evening.

Per league president and CEO Pat O’Connor, “This announcement removes the uncertainty surrounding the 2020 season and allows our teams to begin planning for an exciting 2021 season of affordable family entertainment.”

Because of the coronavirus pandemic, heavy financial constraints were placed on minor-league clubs across the country due to the fact their primary source of revenue comes from ticket sales.

Unlike their parent major-league clubs, minor-league affiliates do not have lucrative television or other media contracts to rely on in the absence of ticket sales and other gameday revenue, so getting through an entire season with teams playing in empty or nearly empty ballparks would have been virtually impossible.

Back in May, the Red Sox committed to paying their non-40-man-roster minor-leaguers $400 per week through the end of August, or what would have been the end of the minor-league season.

Without a minor-league season, it has been reported by Baseball America that some teams will allow their minor-leaguers to pursue opportunities in independent league baseball.

It is also worth mentioning that the Red Sox’ Triple-A affiliate, the Pawtucket Red Sox, were supposed to play their final season at McCoy Stadium this year before relocating to Worcester.

With Polar Park making progress towards its completion before the start of the 2021 minor-league season, it would seem as though the PawSox have already played their last game at McCoy, which they have called home since 1969.

On another note, the short-season affiliate of the Red Sox, the Lowell Spinners, probably won’t be affiliated with the Red Sox for that much longer, as the entire infrastructure of minor-league baseball appears to be headed towards rapid turnover. That much was made evident by this year’s amateur draft, which consisted of only five rounds to make it the shortest in MLB’s history to this point in time.

Minor-league baseball is an important aspect of the game for developing players and young fans alike. Despite that notion, the landscape of MiLB will probably never be the same beginning in 2021 if those aforementioned changed do take place.

The Red Sox will pay their minor-league players $400 per week through the end of August, or what would have been the end of the 2020 minor-league season, according to The Boston Globe’s Alex Speier.

This news comes a day after the club released 22 minor-league players amid the COVID-19 pandemic.

Minor-leaguers have been financially supported by Major League Baseball since March, but that commitment only runs through the end of May.

From there, it will be up to the major-league clubs to extend the salaries of their minor-league players, and it appears that the Red Sox are one of several teams who will be doing so beginning next month.

Per Speier, “All minor leaguers in the Red Sox system who aren’t covered by a major-league contract — meaning who aren’t on the 40-man roster — will receive the $400 weekly stipend.”

As noted by ESPN’s Jeff Passan on Thursday, up to 1,000 minor-leaguers could be released in the next week or so. The majority of these cuts were expected to be made before spring training was suspended, but it is still a tough time for the sport nonetheless, as many professional baseball careers may be coming to an end sooner than expected.

The Red Sox released 22 minor-league players on Thursday, per a team release.

It’s worth noting that these cuts would have likely still been made before spring training was suspended due to the COVID-19 pandemic, but with it looking more and more probable that there will be no minor-league baseball season at all in 2020, it’s very likely the minor-leaguers who were released on Thursday’s may have just seen their professional baseball careers come to a close.

The 22 players released by the Red Sox include 10 pitchers, three catchers, five infielders, and four outfielders:

Lovullo, who turned 26 last December, was drafted by Boston in the 20th round of the 2016 amateur draft out of Holy Cross in Worcester. He played 79 games across three minor-league levels last season.

Profar, meanwhile, signed a minor-league deal with Boston back in November after previously spending time in the Rangers farm system.

These cuts come at a time where hundreds, if not thousands of minor-leaguers are losing their jobs all across baseball as clubs continue to cut costs due to the ongoing pandemic.

Earlier Tuesday, the Boston Red Sox announced that they had extended their player development contract with their Double A affiliate Portland Sea Dogs for the next four seasons.

#BREAKING The Sea Dogs and the @RedSox have announced an extension to their affilation agreement through the 2022 season. https://t.co/NeXiDBRJXY pic.twitter.com/L44tdD2Pzv

Since then, the Eastern League club has won a pair of division titles in 2005 and 2014 as well as their lone league title in 2006.

As things stand right now, the Red Sox’s 40-man roster includes 24 players who came up through the pipeline by way of Portland.

On the same day this news broke, the Sea Dogs also introduced former MLB catcher Joe Oliver as their 13th manager in the club’s history. Oliver, 53, has been with the Red Sox organization in a minor league managing capacity since 2014.