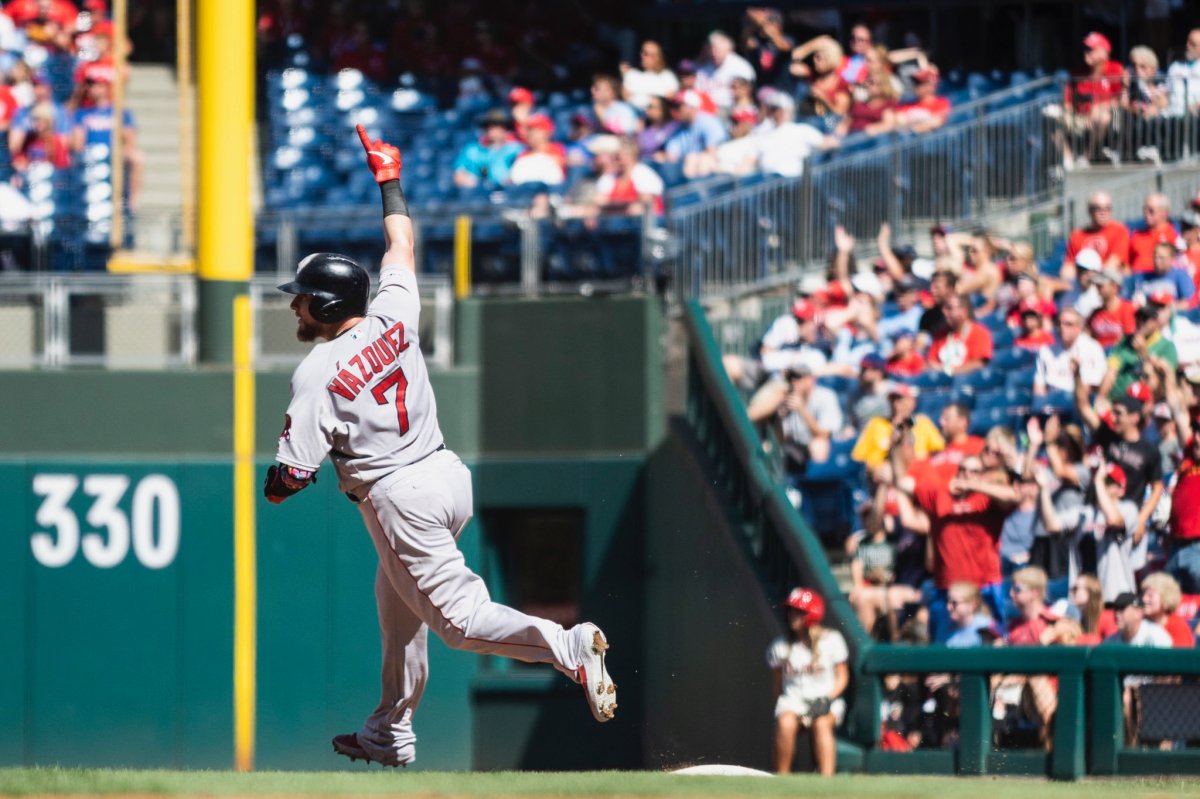 After being held to two runs in a tight one-run victory over the Philadelphia Phillies on Saturday, the Red Sox were able to break out for six runs in a 6-3 win on Sunday to complete the two-game weekend sweep and improve to 79-70 on the season.

Making his 30th start of the season for Boston and second against Philadelphia was Rick Porcello, who surrendered three runs over five innings the last time he faced off against the Phils at Fenway Park back on August 21st.

Tossing five full innings once again this time around, the right-hander yielded two runs, both of which were earned, on five hits and one walk to go along with six strikeouts on the afternoon.

The first of those two Phillies runs came in the bottom half of the second, when with no outs and the bases empty, Rhys Hoskins led things off by unloading on a 2-1, 92 MPH heater from Porcello and crushed it 421 feet to left field to get his side on the board. The 31st long ball of the season given up by Porcelo.

In the fifth, a one-out walk of Scott Kingery and back-to-back two-out singles from the pinch-hitting Phil Gosselin and Cesar Hernandez resulted in another run crossing the plate for the Phillies, but Porcello managed to escape any further damage by getting J.T. Realmuto to ground out to third to both retire the side and end his outing on a more positive note.

Finishing with a final pitch count of 76 (49 strikes), the 30-year-old hurler relied on his two-seam fastball nearly 49% of the time he was on the mound Sunday, inducing zero swings and misses with the pitch. He also topped out at 92.8 MPH with his four-seamer, a pitch he threw eight times while Christian Vazquez was behind the plate.

Ultimately picking up his 13th winning decision while lowering his ERA on the year down to 5.77, Porcello’s best performance of the month is certainly a step in the right direction. He’ll look to build on it in his next time out, which should come against the Tampa Bay Rays on Friday.

In relief of Porcello, Marcus Walden entered the middle of the sixth with a four-run cushion to work with, and he saw that cushion shrink to three on a two-out RBI single off the bat of Jean Segura to drive in Hoskins from second after he drew a one-out walk.

From there, Andrew Cashner maneuvered his way around a leadoff walk in a scoreless seventh, and Matt Barnes faced the minimum in a clean eighth with the help of an inning-ending 3-5-3 double play to make way for Brandon Workman in the ninth for the second time in less than 24 hours.

And in that bottom of the ninth, Workman retired three of the four hitters he faced to lock down the 6-3 win and pick up his 14th save of the season.

Finishing things off with a K. pic.twitter.com/YdiKwdKeSy

On the other side of things, the Red Sox lineup was matched up against veteran left-hander Jason Vargas for the Phillies, someone they had not seen since July 28th, 2017 when he was a member of the Kansas City Royals.

Coming off a night in which they were relatively held in check by Aaron Nola, J.D. Martinez kicked off the scoring for Boston right away in the first, plating Andrew Benintendi from third on a bases-loaded sacrifice fly to right.

Fast forward to the third, and it was the top of the lineup setting the table once again, this time with Benintendi getting plunked, Xander Bogaerts ripping a single, and Martinez drawing a one-out walk to fill the bases for the second time in three innings.

Mitch Moreland was unable to do anything with that, as he fanned on three pitches for the second out of the frame, but Christian Vazquez did not let the opportunity go to waste.

Yup, the backstop took a 2-1, 72 MPH knuckle-curveball from Vargas and proceeded to deposit it 358 feet into the left field seats for his first career grand slam.

Not only did Vazquez’s slam untie the contest and give the Sox a 5-1 advantage, it was also his 20th homer of the season, marking the first time 29-year-old has reached that plateau in his five-year-career.

And in the sixth, Vazquez struck again by blowing right past that 20-homer plateau, as he greeted new Phillies reliever Mike Morin with his second big fly of the afternoon and 21st of the year off a one-out, 2-2, 91 MPH four-seamer on the inner half of that plate.

That solo shot put the Red Sox up 6-2, and after Philadelphia tacked on a run of their own in the sixth, 6-3 would go on to be Sunday’s final score.

From The Eagle-Tribune’s Chris Mason:

The Red Sox have won three straight games. They are 9 1/2 games off the pace for the second American League Wild Card spot.

Next up for the Red Sox, it’s another off day on Monday before welcoming the San Francisco Giants into town for a three-game interleague series beginning on Tuesday.

Right-hander Nathan Eovaldi will get the ball for Boston in the opener, while fellow righty Logan Webb will do the same for San Francisco.

Since moving back to the starting rotation on August 18th, Eovaldi has posted a 5.89 ERA and .254 batting average against over his last five outings and 18 1/3 innings of work, which includes surrendering three runs in 4 1/3 innings in his last time out against the Toronto Blue Jays this past Tuesday.

In six career starts against the Giants, the 29-year-old owns a lifetime 10.86 ERA and .370 batting average against over 29 total innings pitched.

Webb, meanwhile, is ranked as San Francisco’s top pitching prospect and has posted a 6.75 ERA and .337 batting average against in 22 2/3 innings spanning five starts since making his big league debut on August 17th. The Giants are 2-3 in those games.

Last time the Giants visited Fenway Park, the Sox swept a two-game series back on July 19-20 of the 2016 season.