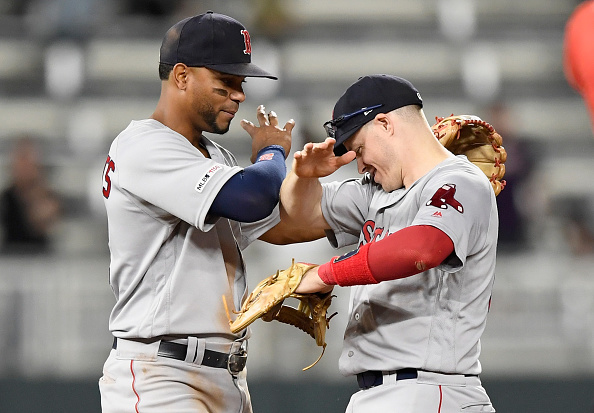 After dropping a 17-inning marathon game earlier in the morning, the Red Sox bounced right back Wednesday night, topping the Twins 9-4 in nine innings to both take the three-game series from Minnesota and cap off a solid 5-1 six-game road trip.

Making his 14th start of the season for Boston was Eduardo Rodriguez, who entered Wednesday fresh off seven quality one-run innings in his last time out against the Baltimore Orioles.

This time around, against a much more superior opponent, the left-hander once again worked seven full frames, as he surrendered four runs, all of which were earned, on eight hits and three walks to go along with nine strikeouts on the night.

From the jump, it looked as though Rodriguez was not going to go too deep into this one. That much was evident with how three straight Twins reached in the first and scored their first run on an Eddie Rosario RBI single.

It could have been worse though, had Jackie Bradley Jr. not snuffed out CJ Cron trying to go from first to home on a Nelson Cruz double in the previous at-bat.

Yesterday he showed off the hops. Today he's showing off the cannon. pic.twitter.com/yZjp35z2t2

Walks became an issue for Rodriguez in the third, when with two outs and Cruz and Sano on base following a pair of free passes, Luis Arraez plated Cruz from second on another RBI single to make it a 3-2 contest.

An inning later, and it was the home run ball that bit the Venezuela native, with both Willians Astudillo and Max Kepler teaming up for two solo shots to put their team ahead 4-3.

Fortunately for Boston, Rodriguez flipped a switch and settled in a bit from the middle of the fifth on, as he sat down nine of the final 10 Twins he faced to end his outing on a much more positive note.

Finishing with a final pitch count of 111 (72 strikes), the 26-year-old relied on his two-seam fastball more than 34% of the time he was on the mound Wednesday, inducing four swings and misses with the pitch. He also topped out at 95.4 MPH with his four-seamer, a pitch he threw 31 times with Sandy Leon behind the plate.

Ultimately improving to 8-4 while slightly raising his ERA on the season to 4.71, Rodriguez continues to be the benefactor of run support from his lineup. His next start should come against the Chicago White Sox sometime next week.

In relief of Rodriguez, the Red Sox bullpen was not as heavily taxed as they were on Tuesday, with just two relievers, Matt Barnes and Marcus Walden, combining for two scoreless frames of relief to wrap up this 9-4 victory.

Ending the road trip with a W. pic.twitter.com/raT1c6McSU

On the other side of things, the Red Sox lineup was matched up against Twins right-hander Kyle Gibson, owner of a career 2.68 ERA in six prior starts against Boston.

Through 13 starts on the season coming into Wednesday, Gibson was averaging just two walks per nine innings, but that was not the case in this particular contest as he gave out a season-high five free passes.

Kicking off the scoring for the Sox was Brock Holt, who came to the plate for the first time in the second inning with Xander Bogaerts and Rafael Devers at first and second and no outs.

On the third pitch he saw from Gibson, a 95 MPH fastball on the bottom half of the strike zone, Holt grounded an RBI single back up the middle to get his team on the board.

Michael Chavis followed that up with an RBI knock of his own to drive in Bogaerts, and Mookie Betts also came through with a run-scoring single to drive in Holt. Just like that, the Red Sox were up 3-1.

Fast forward to the fifth, after Minnesota responded and took a one-run lead of their own, the Boston bats answered with another three-run rally, which was started by JD Martinez drawing a leadoff walk off Gibson.

Two batters later, Bogaerts stayed hot by plating Martinez from second and advancing Devers to third on an RBI line-drive double to left to knot things up at four runs each.

Another day, another milestone!

The stalemate would not last long, however, not with Eduardo Nunez pinch-running for Devers at third and Holt scoring him on an RBI sacrifice fly deep enough to center to make it a 5-4 game.

Another run-scoring single from Chavis, the last hitter Gibson faced, allowed Bogaerts to come in from third after that sac fly, and the Red Sox had themselves a brand new two-run advantage they would not have to look back from.

Michael Chavis with his second RBI of the night! pic.twitter.com/frJxMQEAzc

That being the case because in the top half of the eighth, with Harvard alum Scott Poppen on the mound for Minnesota, back-to-back RBI knocks off the bats of Andrew Benintendi and Martinez allowed the Sox to double up the Twins at 8-4.

And finally, still in the eighth, Holt essentially put this one to bed by drawing a four-pitch, bases loaded walk off Poppen to score Martinez from third and give his team the 9-4 led, which would go on to be Wednesday’s final score.

Tonight marks the first time since 2015 that Rodriguez has pitched at least 6 1/3 IP in two straight starts.

The Red Sox with runners in scoring position on Wednesday: 7-for-14

So, the Red Sox went into enemy territory against the team with the best record in the American League and came out with a series win, with the one loss coming in that 17-inning debacle on Tuesday.

Prior to this series, the negativity towards this Red Sox team was based around the idea that they could not beat other competitive clubs. Given what just went down this week, that narrative may be going by the wayside soon enough.

Next up for the Sox, it’s a well-deserved day off on Thursday before a six-game homestand begins back at Fenway Park on Friday against the Toronto Blue Jays.

Left-hander Chris Sale is set to get the ball for Boston in the opener of that three-game weekend set, while rookie right-hander Trent Thornton will do the same for Toronto.

Since the start of June, Sale has allowed a total of two earned runs in his last 22 innings of work to go along with 32 punchouts in that same span.

In his career against the Jays, the 31-year-old has posted a lifetime 2.67 ERA over 16 appearances (13 starts) and 91 innings pitched.

Thornton, meanwhile, is coming off an impressive outing in his last time out against the high-octane Houston Astros, as he held the class of the American League West scoreless over 6 2/3 impressive innings while also fanning seven in the process.

Making his first Opening Day roster with Toronto back in March, the 25-year-old has never faced the Red Sox nor pitched at Fenway Park.