The Red Sox have claimed right-hander Brandon Brennan off waivers from the Seattle Mariners and optioned him to Triple-A Worcester, the team announced Monday afternoon.

In order to make room for Brennan on the 40-man roster, fellow right-hander Ryan Brasier was placed on the 60-day injured list.

Brennan, 29, was designated for assignment by the Mariners last Wednesday after starting the season at the team’s alternate training site in Tacoma.

He was however limited to just five outings last year on account of suffering a left oblique strain in late July.

A former fourth-round draft pick of the Chicago White Sox out of Orange Coast College, Brennan originally joined the Mariners via the 2018 Rule 5 Draft.

Per Baseball Savant, the 6-foot-4, 207 pound hurler works with a changeup, a sinker, a four-seam fastball, and a slider.

Among the 198 major-league relievers who compiled at least 50 innings pitched over the last two seasons, Brennan ranked 26th in terms of swinging strike percentage (15.3%), per FanGraphs.

Now that he has been added to Boston’s 40-man roster, Brennan — who has three minor-league options remaining — will look to provide right-handed bullpen depth for the Sox in Worcester. He will join the likes of Eduard Bazardo and Colten Brewer as WooSox relievers currently on the Sox’ 40-man.

Brasier, meanwhile, opened the 2021 season on the 10-day injured list for the Red Sox, so transferring him to the 60-day IL is more of a formality than anything.

As noted by MassLive.com’s Chris Cotillo, the 33-year-old “has dealt with two significant injured since the end of last season, as he fractured his pinky finger during an off-season workout and then strained his calf during a ‘B’ game during the last week of spring training.”

The earliest Brasier can be activated from the injured list now is May 28 after the start of his initial IL stint was backdated to March 29. 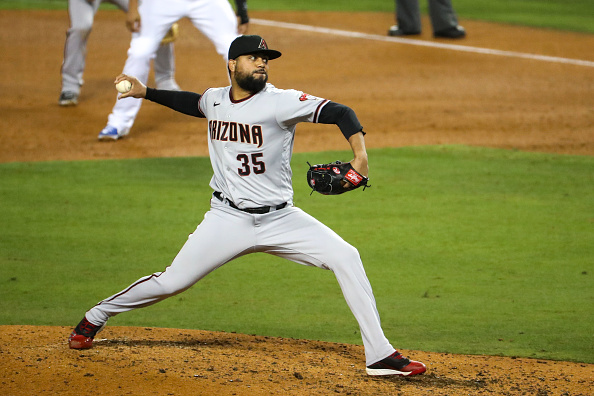 The Red Sox have claimed right-hander Joel Payamps off waivers from the Blue Jays, the team announced Monday afternoon.

In order to make room for Payamps on their 40-man roster, Boston also placed outfielder Franchy Cordero on the COVID-19 related injured list.

Payamps comes back to the Sox a little less than three weeks after being designated for assignment by the club in order to open up a roster spot for starter Garrett Richards on February 3.

The 26-year-old hurler was then claimed off waivers by the Blue Jays a week later, but his stint with Toronto obviously did not last that long.

Prior to getting DFA’d earlier this month, Payamps originally came to Boston from the Diamondbacks via a waiver claim back in November.

In limited action with Arizona the last two seasons, the Dominican native yielded four runs (three earned) on six hits, six walks, and five strikeouts over four total appearances and seven innings of work. That’s good for an ERA of 3.86 and a FIP of 4.35.

Now that he is back with the Sox, Payamps will presumably compete for a spot on the team’s Opening Day roster as a mid-inning reliever, assuming he does not get designated and/or claimed by another club again.

Of course, Payamps, who works with a four-seam fastball, slider, sinker, and changeup, does have one minor-league option remaining, so him starting the year with Triple-A Worcester is a legitimate possibility as well. He is also under team control through 2026, for what it’s worth.

Moving on to Cordero now, the Red Sox placed the 26-year-old outfielder on the COVID-19 injured related list, but as noted by MassLive.com’s Christopher Smith, “being placed on this list does not require a confirmed positive test.”

MassLive.com’s Chris Cotillo tweeted earlier Monday that Cordero was not yet with the team and that manager Alex Cora was not sure of the exact reason as to why.

Cotillo later tweeted that the reasoning behind Cordero being placed on the COVID-19 related IL was “unclear,” noting that it’s not yet known if “he tested positive or has a disputed test or what the exact deal is.”

Cordero joins catcher Kevin Plawecki as the only two members of the Red Sox currently on the team’s COVID-19 related injured list. Both players will not count towards Boston’s 40-man roster as long as they are on said list.

The Dominican-born slugger was originally acquired by Boston from the Royals earlier this month as part of the trade that sent fellow outfielder Andrew Benintendi to Kansas City. He figures to see significant playing time in left field for the Sox this coming season, assuming he is healthy.

Following this particular transaction, the Red Sox’ 40-man roster is back at full capacity, though some spots may be in jeopardy relatively soon assuming both Cordero and Plawecki return sooner rather than later.

Also, the Marwin Gonzalez signing still needs to be made official, so there’s that.

Even after making a slew of roster moves this offseason, the Red Sox are likely still not done making additions between now and Opening Day on April 1.

Outside of the Marwin Gonzalez signing being made official sometime in the near future, nothing in regards to a roster move for Boston is imminent at this point, but that is not going to stop the club from exploring opportunities to improve for the short- and l0ng-term.

Red Sox chief baseball officer Chaim Bloom said as much on Sunday when asked if this is the roster that will kick off the 2021 season.

“Outside of what you alluded to (Gonzalez), there’s nothing else pending,” Bloom said via a Zoom call with reporters. “But, we’re always going to be on the lookout. There’s still some players out there that are of interest. We’re going to keep staying in touch with them, keep monitoring them. You guys saw the other day, we made a waiver claim.”

On Thursday, the Sox claimed right-handed reliever John Schreiber off waivers from the Tigers while placing ace left-hander Chris Sale to the 60-day injured list.

It was a transaction that, on the surface, is reminiscent of when Boston claimed right-hander Phillps Valdez off waivers from the Mariners last February and placed the now-retired Dustin Pedroia on the 60-day injured list in a corresponding move.

Expecting Schreiber, 27 in March, to do the same with his new team this coming season might be a bit unfair, but it’s safe to assume that Boston is making these sorts of moves with the idea that the players they bring in can contribute to the cause.

“This is a time of year when sometimes there can be that kind of roster shuffling in other organizations,” Bloom added. “It’s a bit early in spring to start having a lot of those conversations with other clubs, but we just want to make sure that we’re active. That we have our finger on the pulse and that we don’t walk past anything that has a chance to help us.”

While it still may be too early in the spring to engage with teams on players who may or may not be available via trade, one area the Red Sox can turn to is the free-agent market. And one free-agent the team is still interested in is old friend Jackie Bradley Jr.

Despite coming off a 2020 campaign in which he slashed .283/.364/.450 with seven home runs and 22 RBI over 55 games played, the 30-year-old client of Scott Boras remains unsigned with just weeks to go until the 2021 season begins. That might have something to do with his reported asking price as well as the limited number of suitors out there.

The Red Sox, even while adding the likes of Gonzalez, Franchy Cordero, Enrique Hernandez, and Hunter Renfroe to help bolster their outfield depth, have yet to rule out a reunion with Bradley Jr. — who spent the first eight seasons of his major-league career with Boston — to this point.

“We continue to stay in touch and make sure we’re in touch with Scott about his situation,” said Bloom in regards to Bradley Jr.’s free agency. “We’re going to do that until it resolves. Obviously, as the winter’s gone on, we haven’t let that prevent us from making other moves when we’ve seen opportunity to add good players that fit us and can bolster this roster. But, we love Jackie and we’ve stayed in touch with Scott on him throughout the entire winter.”

“We talk a lot, but we don’t talk baseball,” Cora said. “We don’t talk about his situation. I talk about Emerson and the baby and how they’re doing. He asks about my family, and we keep it at that. Obviously, he’s a good player. He’s a guy that can help any team at the big-league level to win ballgames. There’s more than just the manager and the player. There’s a relationship and I keep our conversations with that.”