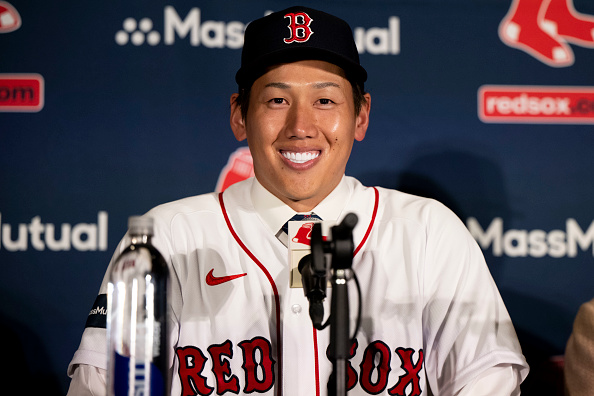 The Red Sox have officially signed Japanese outfielder Masataka Yoshida to a five-year contract that runs through the 2027 season, the club announced on Thursday. In order to make room for Yoshida on the 40-man roster, infielder Jeter Downs was designated for assignment.

Yoshida, 29, agreed to a five-year, $90 million deal with the Red Sox last week — just hours after he was posted by the Orix Buffaloes of Nippon Professional Baseball — and was introduced to the media at Fenway Park on Thursday afternoon. Boston also paid Orix a $15.375 million posting fee for Yoshida’s services, which takes the total value of the club’s investment to over $105 million.

According to MassLive.com’s Chris Cotillo, Yoshida received a $13 million signing bonus from the Red Sox and will earn $15 million in 2023 before earning $18 million per year from 2024 through 2027. The deal does not contain any performance bonuses, team options, or opt-out clauses and is the second-largest contract Chaim Bloom has given out since taking over as Boston’s chief baseball officer in October 2019. Only the six-year, $140 million deal that Trevor Story signed back in March surpasses it.

Yoshida has drawn more walks than strikeouts in each of the last four seasons and is well-regarded for his plate discipline. With that kind of approach, he could profile best as Boston’s leadoff hitter or even as a middle-of-the-lineup option in 2023.

Defensively, Yoshida figures to see the majority of his playing time with the Red Sox come in left field. There are some question marks surrounding the 5-foot-8, 176-pounder’s range and arm strength, but he could always be an option to fill in at designated hitter when needed.

Yoshida, who turns 30 in July, will wear the No. 7 with the Red Sox. He becomes the first position player and the fourth overall free agent signing Boston has made this winter, joining the likes of relievers Joely Rodriguez, Chris Martin, and Kenley Jansen.

Downs, on the other hand, was one of three players — along with Alex Verdugo and Connor Wong — acquired from the Dodgers in the February 2020 trade that sent Mookie Betts and David Price to Los Angeles. The native Colombian came into the Red Sox organization as one of its top prospects but has since seen his stock fall significantly.

After the 2020 minor-league season was cancelled due to the COVID-19 pandemic, Downs began the 2021 campaign with Triple-A Worcester. The right-handed hitter batted just .191/272/.333 with 14 home runs and 39 RBIs in 99 games (405 plate appearances) with the WooSox, but showed signs of promise in the Arizona Fall League and was added to Boston’s 40-man roster last November.

Downs returned to Worcester this spring and slashed .197/.316/.412 with 16 home runs and 33 RBIs over 81 games (335 plate appearances). The 24-year-old made his major-league debut in June but managed to go just 6-for-39 (.154) at the plate with one double and one homer while striking out 21 times. He was sent down in late July and then suffered a season-ending left ankle sprain at Polar Park on August 18.

Despite the offensive struggles he has endured at both the Triple-A and big-league level, it is still somewhat surprising to see the Red Sox designate Downs for assignment. As noted by Cotillo, the 5-foot-11, 195-pounder is seen as a competent middle infielder who possesses both speed and power. While the rate at which he swings-and-misses is concerning, Downs does have two minor-league options remaining and could therefore appeal to other clubs.

The Red Sox, for their part, will have the next seven days to either trade, release, or waive Downs. If he clears waivers, Boston can outright him to Triple-A and keep him in the organization as a non-40-man roster player.