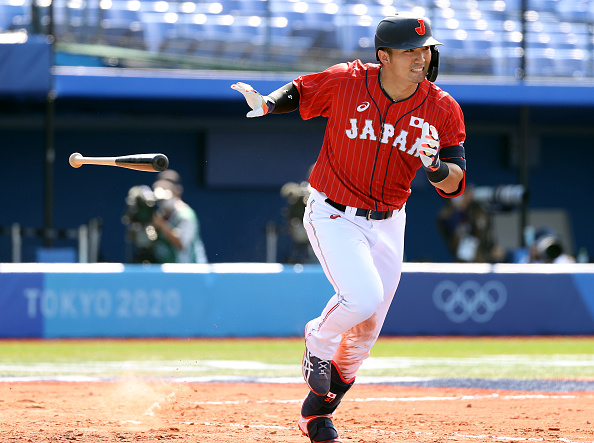 Even in the midst of an ongoing lockout, the Red Sox still appear to be interested in Japanese outfielder Seiya Suzuki.

The Sox have been linked to Suzuki since he was posted by the Hiroshima Carp of Nippon Professional Baseball in November and remain locked in on the star free-agent nearly three months later, according to The Boston Globe’s Pete Abraham.

“Several teams believe the Sox are lined up to make a move on Japanese outfielder Seiya Suzuki when the lockout finally ends,” Abraham wrote on Saturday. “Suzuki is committed to playing in the majors, having decided not to remain with the Hiroshima Carp.”

The Carp officially posted Suzuki on Nov. 22, giving MLB teams a little more than a week to negotiate with the four-time NPB All-Star before the lockout began on December 2. Since that time, Suzuki’s posting window has been paused, but it will pick up once the work stoppage ends, meaning clubs will have roughly three weeks to continue negotiating with his camp.

Despite the lengthy lockout, Suzuki — as Abraham mentioned — remains committed to playing in the major-leagues even though he could return to Japan for the 2022 season and test the free-agency waters again next winter.

Last month, Japan’s Nikkan Sports reported that Suzuki was planning to travel to the United States once the lockout is lifted to negotiate with interested teams in-person. That same report suggested that Suzuki was preparing to narrow down his list of suitors to three or four, noting that clubs with spring training facilities in Arizona may hold a geographical advantage over clubs with complexes in Florida (like the Red Sox).

A few weeks before that report came out, Suzuki himself told The Athletic’s Andrew Baggarly that he has heard recruiting pitches from 10 to 12 teams and the Sox are among that group. He would not reveal his personal short list, though he did indicate that he had no preference for which league or coast he played on.

“I can’t stop thinking about which team to pick,” Suzuki said. “I’m going to be honest with you: I’m still very confused. I can’t sleep every night because a lot of the teams hit my heart. I still have to give it a lot of thought.”

Shortly before the lockout began, the Red Sox put themselves in a position where they could benefit from Suzuki’s services when they traded Hunter Renfroe to the Brewers for fellow outfielder Jackie Bradley Jr. and a pair of prospects.

By effectively swapping Renfroe for Bradley Jr., Boston shook up their outfield mix significantly in that they traded offensive production for defensive production. That being said, they also traded away a right-handed hitting outfielder for another left-handed hitting outfielder to join the likes of Jarren Duran and Alex Verdugo on the 40-man roster.

Since he possesses pop from the right side of the plate, Suzuki could in theory fill the void left behind by Renfroe and emerge as the Sox’ everyday right fielder. Going back to what chief baseball officer Chaim Bloom said earlier this winter, the 27-year-old does fit the profile of a right-handed hitter the club might prefer to sign over a left-handed hitter.

Suzuki, who does not turn 28 until August, is about 2 1/2 years younger than Renfroe, who turned 30 last month. The former has drawn comparisons to the latter and may have an even stronger defensive profile seeing how he is a five-time recipient of the Mitsui Golden Glove Award.

Listed at 5-foot-11 and 182 pounds, Suzuki is “expected to command a contract in the range of five years and $60 million,” per Baggarly. This does not take into account the compensation Suzuki’s new team would owe Hiroshima in the form of a release fee.

As things stand now, it appears as though the Red Sox have as good a chance as any club to land Suzuki once the lockout eventually ends. With some help from former Boston closer Koji Uehara, it just might happen.

The Red Sox are one of three American League teams with with interest in Japanese outfielder Seiya Suzuki, according Sean McAdam of Boston Sports Journal.

Per McAdam, “one major-league source reports the Yankees, Blue Jays, and Red Sox have been the most aggressive in pursuit of Suzuki.”

Suzuki had been one of the more coveted free agents in this winter’s market prior to the anticipated work stoppage putting a freeze on transactions beginning December 2.

The 27-year-old was initially posted by the Hiroshima Carp of Nippon Professional Baseball on November 22, which — under normal circumstances — would have given him and his representatives up to 30 days to negotiate a contract with major-league clubs.

Because of the lockout, however, Suzuki’s posting window has been paused for the time being. Once the work stoppage eventually comes to a close, he would then have roughly 20 or so days to continue negotiating with MLB teams or otherwise return to Japan.

In the wake of trading Hunter Renfroe to the Brewers for Jackie Bradley Jr. and a pair of prospects, the Red Sox very well find themselves in need of some outfield help, particularly from the right side of the plate.

As noted by McAdam, “Suzuki could play right field for the Sox, replacing Renfroe both defensively and as a productive right-handed bat.”

Not only has Suzuki enjoyed a great deal of offensive success over the course of his nine-year NPB career, but the 5-foot-11, 182 pounder is also a five-time recipient of the Mitsui Golden Glove Award.

By dealing away Renfroe and acquiring Bradley Jr. from Milwaukee, Boston has added another left-handed bat to an outfield mix that already consists of Alex Verdugo and Jarren Duran.

Suzuki, in turn, would provide the Sox with a talented right-handed hitter while simultaneously allowing the club to keep Verdugo in left field and Enrique Hernandez in center field if they so choose.

“I do feel we still have room to add position players to this crew,” Bloom said. “Obviously swapping Hunter for Jackie does change the handedness of our group a little bit. So maybe the dial moves a little more toward a right-handed bat where before it might have been towards a left-handed bat. But there’s different ways it can come together with the versatility and flexibility that we have. So we’re going to keep looking to supplement.”

Regarded by many — including an evaluator McAdam spoke to — as “a difference-maker,” Suzuki is projected by MLB Trade Rumors to receive a five-year deal worth $55 million in free agency.

While signing Suzuki would not cost the Red Sox (or any other team) a draft pick, they would owe Hiroshima compensation in the form of a posting fee. Under the current agreement between Major League Baseball and NPB, this posting fee is equal to 20% of the first $25 million in guaranteed contract value, plus 17.5% of the next $25 million, plus 15% of any amount beyond $50 million.

Like most clubs, the Red Sox will be looking to upgrade their bullpen in various ways this winter.

Of the 29 non-position players who made at least one relief appearance for the Sox this past season, only 11 remain on the team’s 40-man roster as of this moment.

While The Boston Globe’s Alex Speier wrote on Saturday that the Red Sox “are looking to upgrade their bullpen,” he also noted that they “likely won’t limit their search to familiar names” and are instead “expected to look internationally for help.”

As alluded to by Speier, the Sox have been active in the international market since Chaim Bloom took over as chief baseball officer two years ago. Most notably in this case, Boston signed veteran reliever Hirokazu Sawamura out of Japan to help fill out their bullpen for the 2021 season.

This off-season, the Red Sox seem primed to once again dip their toes into international waters — while also remaining active within the traditional free agent reliever pool — in order to upgrade their bullpen.

How will Bloom and Co. go about addressing this area of need? Well, this piece in particular will focus on one potential free agent target in Hanshin Tigers right-hander Robert Suarez.

Suarez, 30, began his professional baseball career in the Mexican League in 2015, but signed with the Fukuoka SoftBank Hawks of Nippon Professional Baseball that November and has spent the last six years in Japan.

After undergoing Tommy John surgery in 2017, Suarez later signed with Hanshin in December 2019 and has enjoyed quite a bit of success in his two seasons there.

Most recently, the native Venezuelan posted a miniscule 1.16 ERA and 0.77 WHIP to go along with 58 strikeouts to just eight walks over 62 relief appearances spanning 62 1/3 innings of work in 2021.

Operating as Hanshin’s closer, Suarez led NPB’s Central Division in saves (42) while also striking out 25.3% of the batters he faced and walking just 3.5% of them.

When he first joined the Tigers in 2019, Suarez became a free agent at the conclusion of the 2020 campaign. He then re-signed with the club on a two-year deal that included a player option for 2022, which would allow him to become a free agent again this winter.

At present, it’s unclear if the Red Sox are one of the teams inquiring about Suarez, who turns 31 in March. However, according to a source with knowledge of the situation, the 6-foot-2, 210 pound hurler “is still not technically a free agent just yet.”

If and when the time comes that Suarez does become a free agent this off-season, one would have to think that more information regarding potential suitors and such will become available.

In the interim, the Red Sox will undoubtedly be exploring all options available to them when it comes to improving their bullpen and the rest of their roster.

(Picture of Robert Suarez: The Asahi Shimbun via Getty Images)