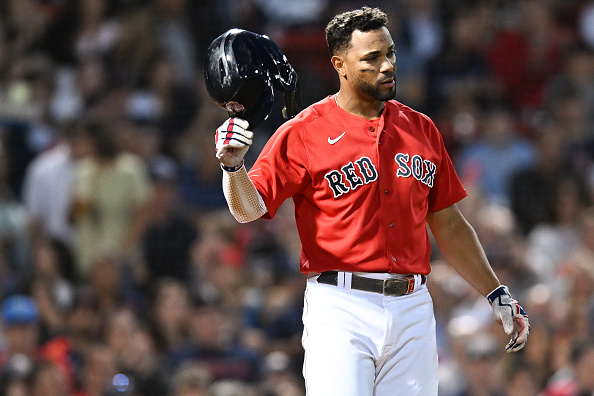 The Red Sox came up short of another walk-off win over the Yankees at Fenway Park on Saturday night. Boston fell to New York by a final score of 3-2 to drop to 56-59 on the season.

Matched up against newly-acquired Yankees starter Frankie Montas, the Sox drew first blood in the bottom of the fourth inning. Alex Verdugo and Christian Arroyo both drew walks while Eric Hosmer singled to load the bases with one out. Jarren Duran then took a 91 mph cutter off his knee to drive in Verdugo before Reese McGuire plated Hosmer on a sacrifice fly to center field.

Kutter Crawford, meanwhile, was in the midst of making his ninth start of the season for Boston. The rookie right-hander faced the minimum through his first three innings of work. He issued a walk to Anthony Rizzo and a single to Josh Donaldson in the fourth, which put runners at the corners with two outs for Gleyber Torres.

Torres proceeded to rip a 341-foot laser in the direction of Verdugo in right field. Verdugo initially took a step inward, but corrected himself in time to make a fantastic catch on the run to strand Rizzo and Donaldson and end the inning there.

The Yankees finally got to Crawford in the fifth, however. After issuing a leadoff walk to old friend Andrew Benintendi, the righty served up a game-tying, two-run home run to Isiah Kiner-Falefa. It was a 372-foot blast over the Green Monster that was good for Kiner-Falefa’s first long ball of the season.

While that did prove to be costly, Crawford did end his night on a solid note by retiring five of the final six hitters he faced through the middle of the sixth. The 26-year-old hurler wound up surrendering the two runs on two hits, four walks, and five strikeouts over six innings. Fifty-nine of the 94 pitches he threw went for strikes and his ERA on the season now sits at 4.18.

In relief of Crawford, Hirokazu Sawamure received the first call out of the Boston bullpen from manager Alex Cora. Sawamura struck out two in a scoreless top of the seventh. In the latter half of the frame, the Red Sox lineup now found themselves opposed by Yankees reliever Lou Trivino.

Xander Bogaerts ripped a two-out double to left field, which prompted Yankees manager Aaron Boone to turn to Aroldis Chapman with the left-handed hitting Verdugo due to hit next for the Sox. Chapman plunked Verdugo to bring J.D. Martinez to the plate in a prime run-scoring spot. But the bat was taken out of Martinez’s hands when Chapman caught Bogaerts trying to steal third base and picked him off to extinguish the threat.

John Schreiber took over for Sawamura and put up another zero in the eighth. In the ninth, he gave up a one-out double to Beintendi that was immediately followed by a Jose Trevino infield single to put runners on the corners.

Following a mound visit from pitching coach Dave Bush, Schreiber was tasked with facing Kiner-Falefa, who came through for the Yankees yet again by dropping a perfectly-executed squeeze bunt that scored Benintendi from third to make it a 3-2 game.

Down to their final three outs in the bottom of the ninth, the Sox showed some signs of life against Scott Effross. McGuire and Pham each singled with one out to put runners at first and second for the meat of the order. But Rafael Devers grounded into a force out at second base and Bogaerts popped out to first base to end it.

All told, the Red Sox went 1-for-9 with runners in scoring position and left 10 runners on base as a team. Devers, Bogaerts, and Martinez went a combined 1-for-14 with two strikeouts. Pitching-wise, Schreiber was charged with his second loss of the year.

Next up: Wacha returns for rubber match

The Red Sox will activate right-hander Michael Wacha from the 15-day injured list to start Sunday’s series finale against the Yankees. Wacha has been sidelined with right shoulder inflammation since early July. Fellow righty Jameson Taillon will start for New York.

First pitch from Fenway Park is scheduled for 7:08 p.m. eastern time on ESPN.