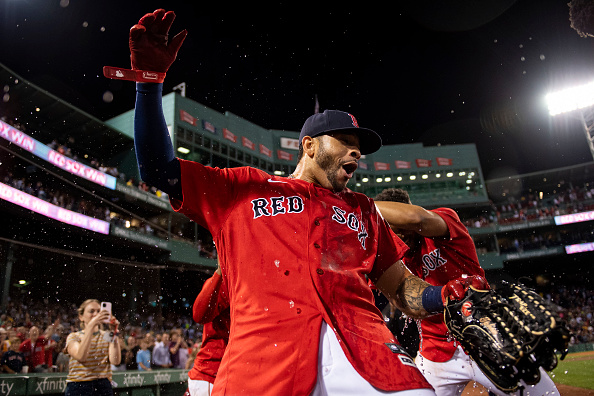 The Red Sox walked off the Yankees in 10 innings at Fenway Park on Friday night. Tommy Pham immersed himself into the storied rivalry by lifting Boston to a 3-2 victory over New York.

Well before that, though, Nathan Eovaldi made his 18th start of the season for the Sox. The veteran right-hander grinded through six innings, allowing two runs on eight hits and two walks to go along with three strikeouts on the night.

The first of those two runs came right away in the top of the first inning. After issuing a one-out walk to Aaron Judge, Eovaldi gave up an RBI double to Anthony Rizzo. Two innings later, Judge took Eovaldi 429 feet over the Green Monster for his 46th home run of the season to give the Yankees a 2-0 lead.

J.D. Martinez got the Red Sox on the board in the fourth inning by driving in Alex Verdugo, who led off with a double, on a run-scoring single up the middle. That cut the deficit in half, but it was all they could get off Yankees starter Domingo German, who tossed six-one run innings.

Eovaldi, meanwhile, settled in by retiring nine of the final 12 batters he faced from the fourth inning on. He gave up a one-out single to old friend Andrew Benintendi in the sixth, but that was immediately negated when Jose Trevino popped into a force out at second base.

All told, Eovaldi finished with a final pitch count of 108 (70 strikes). The 32-year-old hurler induced a total of 11 swings-and-misses while averaging 94.4 mph with his four-seam fastball. His ERA on the season now sits at 4.15.

In relief of Eovaldi, Matt Barnes received the first call out of the Boston bullpen from manager Alex Cora. Barnes yielded a one-out single to D.J. LeMahieu and promptly plunked Judge, but he got out of that by punching out Rizzo and Josh Donaldson in back-to-back fashion.

From there, Ryan Brasier retired the side in order in the eighth before Garrett Whitlock did the very same in the ninth to hold the Yankees at two runs. In the latter half of the inning, the Red Sox were down to their final three outs and matched up against All-Star closer Clay Holmes.

Holmes got a slumping Rafael Devers to ground out to short, but then issued back-to-back walks to Xander Bogaerts and Verdugo. Martinez then came through once again by driving in Bogaerts on another RBI single up the middle to knot things up at two runs apiece.

Verdugo, who advanced to third on the play, represented the potential winning run as Yankees manager Aaron Boone pulled Holmes in favor of Wandy Abreu. The lefty fanned Eric Hosmer and then got Christian Arroyo to line out to send the game into extras.

Whitlock came back out for the 10th and stranded runners at second and third while striking out Donaldson and Gleyber Torres. Arroyo, having recorded the final out of the ninth, started the bottom of the 10th inning at second base. Jaylin Davis moved him up to third on a softly-hit groundout.

After Reese McGuire reached base on a bunt single, Pham delivered with the hit of the night: a walk-off single down the left field line off Lou Trivino that scored Arroyo from third. Comeback completed.

With the win, their second straight, the Red Sox improved to 56-58 on the season. They still trail the Orioles by four games for the third and final American League Wild Card spot.

Next up: Crawford vs. Montas

The Red Sox will go for their second consecutive series win over an American League East opponent on Saturday night. Rookie right-hander Kutter Crawford will get the start for Boston while former Red Sox pitching prospect Frankie Montas will do the same for New York.

First pitch from Fenway Park is scheduled for 7:15 p.m. eastern time on FOX.