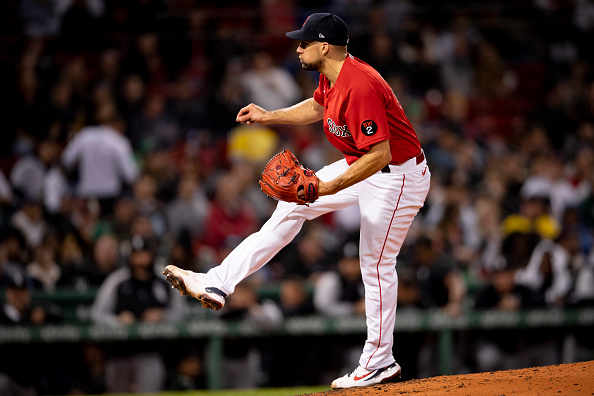 The Red Sox saw their losing streak grow to three consecutive games on Friday following a 3-1 to the White Sox at Fenway Park. Boston drops to 10-17 on the season and now find themselves squarely in the basement of the American League East.

Nathan Eovaldi, making his sixth start of the year, surrendered three earned runs on six hits and three walks to go along with four strikeouts over five innings of work. It was truly a grind for the right-hander, who saw all three runs scored off him come in the third inning.

After giving up back-to-back singles that put runners on the corners with no outs, Jose Abreu lifted a sacrifice fly off Eovaldi that brought in Tim Anderson from third base to give Chicago a 1-0 lead. The very next batter, Luis Robert, crushed a two-run home run 389 feet over the Green Monster to make it a 3-0 game.

Eovaldi escaped the third while evading any further damage, but had done so while seeing his pitch count rise to 72. He then worked his way around a leadoff single in the fourth before retiring six of the final seven White Sox hitters he faced through the middle of the fifth.

Finishing with a final pitch count of 101 (65 strikes), Eovaldi turned to his four-seam fastball 45% of the time he was on the mound Friday. The 32-year-old hurler induced four swings-and-misses with the pitch and hovered around 93 to 99 mph with the pitch. His ERA on the season now sits at 2.94.

To that point in the contest, a Red Sox lineup that featured Jarren Duran for the first time this year had been stymied by White Sox starter Vince Velasquez. In the bottom of the fifth, though, Alex Verdugo broke out of an 0-for-12 skid with a leadoff double and scored from second on an RBI double off the bat of Jackie Bradley Jr.

Bradley Jr.’s eight double of the season got the Sox on the board to cut the deficit to 3-1. A Kevin Plawecki groundout allowed Bradley Jr. to advance to third and Duran getting plunked by a pitch put runners on the corners for Trevor Story. Story, in turn, was rung up by first base umpire Carlos Torres on a questionable check swing call that nonetheless extinguished the threat.

In relief of Eovaldi, Austin Davis got the first call out of the Boston bullpen from manager Alex Cora. The left-hander recorded the first two outs of the sixth before making way for the recently called-up John Schreiber, who ended things in the sixth and also sat down the side in 1-2-3 fashion in the seventh.

Ryan Brasier, on the other hand, was responsible for the eighth inning and immediately gave up a leadoff single to Adam Engel. Engel promptly stole second base, moved up to third on a lineout, and scored an important insurance run on a Reese McGuire sacrifice fly to give his side the 4-1 advantage.

To lead off the bottom of the eighth, Duran was able to put his elite speed on display by tripling on an 80.4 mph fly ball to right field that got past Adam Engel. The speedster then came into score on a Story RBI groundout that brought the Red Sox back to within two runs of the White Sox at 4-2.

Rafael Devers followed with a groundball single that brought the tying run to the plate in the form of Xander Bogaerts, who fanned on five pitches and thus left it up to J.D. Martinez. Previously 0-for-3 on the night, Martinez beat out an infield single to third base to keep the inning alive for Verdugo, who softly grounded out to Kendall Graveman.

Matt Barnes took the mound for the top of the ninth and managed to work his way around a leadoff walk of of A.J. Pollock when Bradley Jr. gunned down Barnes at home plate to complete a well-executed 9-1 double play. Barnes then struck out Robert on five pitches to hold the White Sox at four runs.

Down to their final three outs in the ninth and matched up against vaunted White Sox closer Liam Hendriks, Franchy Cordero came off the bench for the Red Sox in place of Bobby Dalbec and struck out looking. Shortly thereafter, Bradley Jr. fanned himself before Christian Vazquez, who was pinch-hitting for Plawecki, drew a walk to once again bring the tying run to the plate as the lineup flipped back over.

With a chance to come through in the clutch, Duran got ahead in the count at 2-0 but struck out swinging to seal another Red Sox defeat. Durant went 1-for-4 with one run scored and one strikeout in his 2022 debut.

As a team on Friday, Boston went 1-for-7 with runners in scoring position and left a total of eight runners on base.

Next up: Cease vs. Pivetta

The Red Sox will send right-hander Nick Pivetta to the mound in the middle game of this three-game series on Saturday afternoon. The White Sox will counter with fellow righty Dylan Cease.

First pitch from Fenway Park is scheduled for 4:10 p.m. eastern time on NESN.