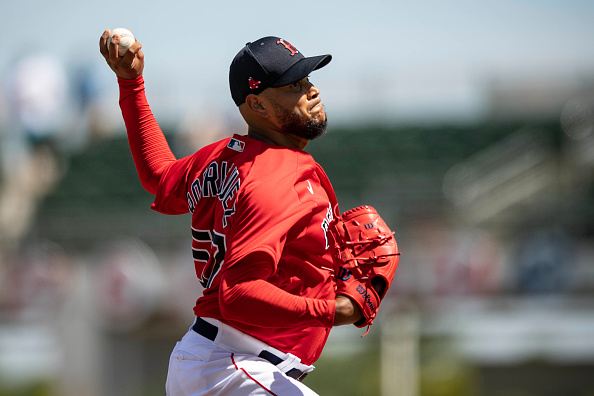 To nobody’s surprise, the Red Sox placed left-hander Eduardo Rodriguez on the 10-day injured list on Thursday due to left elbow inflammation.

The soon-to-be 28-year-old hurler was originally slated to start on Opening Day for the Sox in their first game of the year against the Orioles, but was scratched from said start after suffering a “dead arm” in the last week of spring training.

Now that he has been placed on the injured list — which was actually backdated to March 29 — the hope is that Rodriguez will be be able to return to the mound in the very near future.

“Him going on the IL is nothing long-term,” Red Sox manager Alex Cora said about Rodriguez earlier Thursday. “It’s just [that] we ran out of time to build him up. The hope is for him to rejoin us sooner rather than later. And sooner is like next week.”

Rodriguez will head to Worcester on Friday to throw a simulated game at the Sox’ alternate training site at Polar Park.

Though Cora was unsure of how many innings or pitches Rodriguez would throw in that simulated game, he did place an emphasis on the Venezuelan southpaw’s health in the midst of this latest setback.

“We’ll build him up and see how it goes,” said the Sox skipper. “Like the whole week, the next day is the most important day. Hopefully he’s OK. The goal is for him is to be with us hopefully next week.”

Because his stint on the injured list was backdated to this past Monday, Rodriguez could be activated from the IL as soon as April 8, which — as noted by MassLive.com’s Chris Cotillo — would line him up to get the starting nod against the Orioles in the Red Sox’ road opener in Baltimore.

Rodriguez, who missed all of 2020 due to a heart condition as a result of contracting COVID-19 over the summer, has not pitched on a big-league mound since September 2019. While he is surely anxious to get back out there as soon as possible, he also understands that he needs to be at his best health-wise before returning to action.

“I’m going to go out there when I’m 100%,” Rodriguez said last weekend. “That’s why we sat together and made the decision. I want to go out there and compete and not think, ‘Oh, my shoulder’ and all that and miss my spots.”

The start of the 2021 season, which for the Red Sox was pushed back from Thursday to Friday, will mark the second consecutive year in which Rodriguez was supposed to be Boston’s Opening Day starter but ultimately was not.

“It sucks for him because going into ‘20 he was supposed to be the Opening Day starter,” Cora said of the 6-foot-2, 231 pounder back on March 26. “Going into ‘21, we announced it and now he’s not. But I told him yesterday, I said, ‘Hey, man. The way you throw the ball, the way your career is going, at one point in your career you will be an Opening Day starter. Maybe more than once.’ So he took it as a professional. With him, I think the communication is very clear. It’s very genuine. And for him to accept it and think about the future and not the first game of the season, it is a testament to who he is right now as a pitcher, as a person, as a leader in this team.”