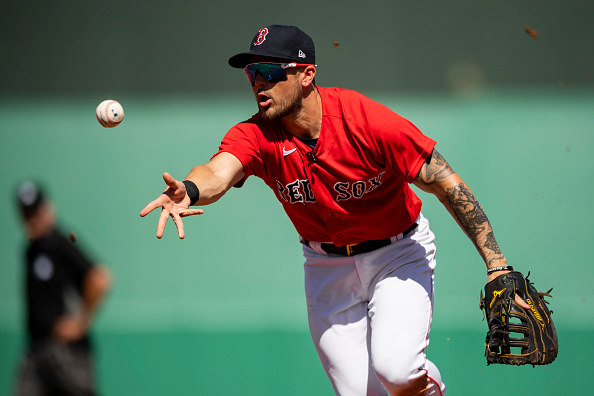 Michael Chavis was informed on Tuesday that he would not be making the Red Sox’ Opening Day roster. He was instead optioned to the club’s alternate training site in Worcester, where he will be for the start of the 2021 season.

As it turns out, the 25-year-old was not exactly thrilled with that decision, especially after he put together a solid spring in which he slashed .250/.292/.600 with six home runs and 11 RBI over 25 games and 65 plate appearances.

Chavis had been competing with fellow infielder Christian Arroyo for one of the final spots on Boston’s Opening Day bench. Earlier in the spring, it looked like both Chavis and Arroyo had a chance to make the team, but outfielder Franchy Cordero being activated from the COVID-19 related injured list on Tuesday squashed any chance of that happening.

On top of that, Arroyo — who himself had a decent spring (.771 OPS in 55 PAs) — is out of minor-league options, while Chavis still has options remaining.

Taking those points into consideration, as well as the fact that the Sox like Arroyo’s versatility, Chavis did not stand much of a chance since he, too, is a right-handed hitting infielder.

“Both of them did an amazing job,” Red Sox manager Alex Cora said about the pair of 25-year-olds on Tuesday. “They did a good job. Coming into the spring, I knew a little bit about Christian. I knew a lot about Michael. There’s a lot of circumstances that go into the decision. But one thing that we like about Christian, he can play short. We saw it throughout spring. He can do that.

“Michael, he made some strides, and we talked about it,” added Cora. “I’m glad that he was upset, because that’s part of it. Nobody’s happy when they send you down. But we talked about a few things that he needs to do to be the complete hitter that we know he can be.”

Despite putting up decent numbers on the Grapefruit League campaign as a whole, Chavis had been struggling at the plate as of late. In fact, he finishes his spring having gone 2-for-his-last-17 with no homers, one RBI, no walks, and eight strikeouts over his last eight games and 57 plate appearances.

In total, the Georgia native struck out 20 times in his 65 trips to the plate this spring. That translates to a strikeout rate of 30.8%, which is something that has plagued Chavis since making his big-league debut with the Sox in April 2019.

“I think at the end [of spring training], he didn’t control the strike zone,” Cora said. “He was very aggressive chasing pitches out of the zone. So now with his swing — he knows the boundaries of the strike zone up — now we have to make sure, ‘Hey, we’re going to drive pitches in the zone.’ So he’ll work on that.”

Cora, as he has over the course of the spring, emphasized that it takes more than 26 players to win a World Series and that making the Opening Day roster does not ensure any one player will remain on the team throughout the year.

He also pointed out how unexpected circumstances — such as ones caused by the ongoing COVID-19 pandemic — can change things in a hurry.

“We never know. We never know what can happen,” said the Sox skipper. “So [Chavis] needs to be ready. Not only him, all those kids down there. We know they can play and I think it will be good for him to go down and play everyday. That’s going to make him a better player.”

Players at the Red Sox’ alternate training site will make their way to Worcester this week before workouts at Polar Park begin on Thursday. From there, the Worcester Red Sox’ (Triple-A) season is slated to begin on May 4.