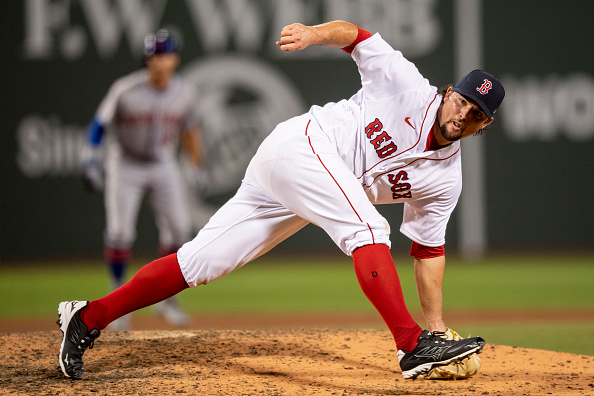 After a disappointing start to their season over the weekend, the Red Sox saw their losing streak grow to three games on Monday night in a 7-4 defeat at the hands of the Mets at Fenway Park.

Josh Osich got the start for Boston to kick off this two-game interleague series, and he was far from perfect in his first experience as an opener. That being the case because over two innings of work, the left-hander surrendered two runs, both of which were earned, on two hits and one walk to go along with one strikeout on the night.

Both of those Mets runs scored against Osich came off the bat of Michael Conforto, who made the veteran southpaw pay for a leadoff walk of J.D. Davis in the second inning by crushing a two-run home run into the right field bleachers moments later. Once again, the Red Sox found themselves in an early hole, and that hole only got deeper as the Sox turned to another lefty, Jeffrey Springs, to start things out in the third.

Springs, acquired from the Rangers in January, did not fare much better than Osich. In fact, you can even say he had a tougher time of things considering the fact that he served up an absolute missile of a two-run homer to Pete Alonso in the third and a three-run blast to Dominic Smith in the fourth.

.@TheRealSmith2_ joins the party and extends our lead to 7️⃣. #LGM pic.twitter.com/TBKs1HsXTn

The 27-year-old did manage to retire the last man he faced in Brandon Nimmo, but the damage had already been done seeing how his side was down by seven runs. Heath Hembree came on with one out in the top half of the fourth and finished the inning.

From there, things actually got better for the Red Sox pitching staff thanks in large part to the recently-signed Zack Godley, who was slated to be the “bulk inning guy” for Boston in this one.

In what was his long-awaited Red Sox debut, Godley served that role well by working four scoreless frames while scattering four hits and no walks to go along with seven punchouts against the 16 Mets hitters he faced.

Finishing with a final pitch count of 53 (36 strikes), the 30-year-old hurler relied mostly on his cutter and knuckle curveball while inducing 15 total swings and misses with the combination of pitches. He also topped out at 90.5 mph with that cutter.

Seeing how the Sox’ starting rotation is basically in shambles, Godley should be a candidate to start for Boston when they face off against the Yankees in the Bronx this coming Saturday.

Zack Godley struck out seven in his #RedSox debut on Monday. pic.twitter.com/okDLPlTWxj

In relief of Godley, right-hander Phillips Valdez wrapped things up by tossing a scoreless ninth inning to hold the Mets at seven runs. Not like it mattered much in the end, but still encouraging to see from someone who is not well-known like Valdez.

On the other side of things, the Red Sox lineup was matched up against veteran right-hander Michael Wacha for the Mets, who made his first in-game appearance at Fenway Park since pitching in Game 6 of the 2013 World Series.

Contrary to that outing in which he gave up six runs in fewer than four innings of work, the now-29-year-old Wacha was much more effective in his Mets debut. It also didn’t help that the Sox found themselves down by four runs before this game was even a third of the way over.

Back to Wacha, the only Boston run that was scored off the ex-Cardinal came courtesy of a two-out solo home run from Mitch Moreland in the bottom half of the fourth. Moreland’s first big fly of 2020 put his side on the board and made it a 7-1 game in favor of New York.

Fast forward to the sixth, and Xander Bogaerts greeted new Mets reliever Chasen Shreve by taking the left-hander deep to the opposite field on a one-out, 1-1 92 MPH heater right down the heart of the plate. That made it a 7-2 contest.

In the eighth, Moreland and Bogaerts struck once more, this time combining to plate another pair of runs on an RBI groundout and single off Jeurys Familia to make things a little more interesting at 7-4.

A las, nothing more came of that, as Seth Lugo entered for the Mets, fanned Christian Vazquez on seven pitches, and tossed a 1-2-3 ninth to secure a three-run victory for his side and a third straight loss for the Red Sox.

Some notes and observations from this loss:

Roenicke says Godley has a chance to join the rotation but won't commit to it yet.

From The Boston Globe’s Pete Abraham:

Bogaerts jammed his back, neck and hips on that play in the first inning. But finished the game (and homered) and said he plans to play tomorrow night.

The Red Sox have been outscored 21-10 since Friday’s Opening Day win over the Orioles.

Andrew Benintendi got his first hit of the season on Monday, albeit it came on a bunt single. Rafael Devers also collected his second hit of the year, an opposite field double off the base of the Green Monster.

The Braves designated right-hander and 2018 National League All-Star Mike Foltynewicz on Monday. Chief baseball officer Chaim Bloom and the Red Sox should be in on that all things considered.

Next up for the Red Sox, it’s the series finale of the first leg of this home-at-home bout against the Mets.

Left-hander Matt Hall will get the start for Boston, while New York has yet to name a starter.

Luis Rojas said he is "not there yet" regarding a Mets starter for tomorrow. He will review the freshness of the bullpen before making a decision.

According to Red Sox manager Ron Roenicke, Hall, who will be making his first career major-league start, “could go four or five [innings]” since he’s been stretched out.

“I think if he’s pitching well, he’ll be in there for a few innings hopefully,” Roenicke said of Hall on Sunday. “And then we’ll piece together the end of it.”

Hall, who turned 27 years old last week, impressed the Sox during Summer Camp, nearly six month after the southpaw was initially acquired in a trade with the Tigers.

In 21 career relief appearances with Detroit dating back to 2018, the Missouri State product owns a 9.48 ERA and 5.15 FIP over 31 1/3 innings pitched. He has also made 85 career starts in the minors since being taken in the sixth round of the 2015 draft.