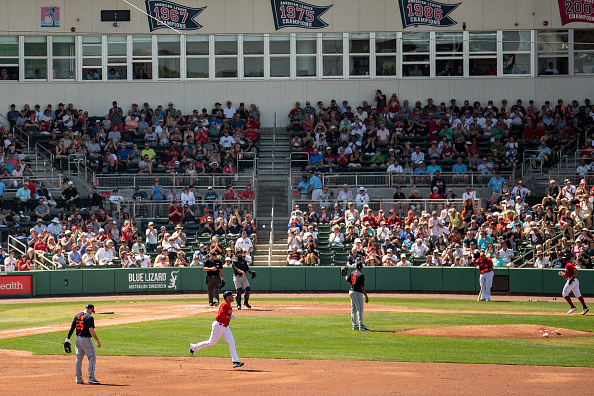 After allowing nine runs in a 9-1 loss against the Yankees on Tuesday, the Red Sox fell to 4-7-2 in Grapefruit League play on Wednesday following a 13-9 defeat at the hands of the Detroit Tigers at JetBlue Park.

Making his first start and third overall appearance of the spring for Boston was Jeffrey Springs, coming off a scoreless inning of relief in his last time out against the Yankees this past Sunday.

Working just the first inning of this one, the left-hander got hit hard for five runs, all of which were earned, on five hits and zero walks to go along with zero strikeouts of the afternoon.

All five of those early Tigers tallies came courtesy of the long ball, with C.J. Cron whalloping a three-run homer off of Springs, and Frank Schwindel following that up with a two-run shot a few moments later.

It was a laborious task, but Springs was able to at least retire the final two of the eight hitters he faced in order to retire the side without giving anything else up.

From there, Eduard Bazardo walked one and struck out another in a scoreless top half of the second, Ryan Brasier bounced back from a tough spring debut with a pair of perfect frames, Heath Hembree followed by serving up two home runs, a solo shot in the fifth plus a two-run shot in the sixth, over two innings of relief, Yoan Aybar worked around a leadoff walk and one-out HBP in an otherwise clean seventh, Mike Shawaryn fanned three in the eighth, and left-hander Matthew Kent got bombarded for five runs, although none of them were earned, in the ninth before Matthew Gorst came on and recorded the final out on a punchout.

All in all, Sox pitching combined to surrender 13 runs (eight earned) on 15 hits, five of which were home runs, and two walks to go along with 10 total strikeouts over nine innings of work.

Since the calendars flipped to March, Red Sox pitching has allowed 35 runs over their last four games.

Despite going down by five before even taking their first at-bats, the Boston bats responded swiftly in their half of the first, as Pillar and Bradley Jr. greeted Nova with a leadoff single and double to put runners in scoring position with one out for J.D. Martinez.

Martinez didn’t waste anytime, either, as he took the second pitch he saw from the Tigers starter and deposited deep to left field for a three-run shot. His second homer of the spring cut the deficit to two at 5-3.

An inning later, it was the bottom half of the lineup getting it done, with Ockimey leading the frame off with a double and Downs, the organization’s top prospect, driving him in on a one-out, run-scoring single to left. 5-4.

In addition to his first inning double, Bradley Jr. capitalized in his second plate appearance against Nova in the third, as he ripped a leadoff homer over the left field wall to knot things up at five runs apiece. His second big fly of the spring.

Fast forward all the way to the seventh, after Detroit had jumped out to an 8-5 edge, Chad De La Guerra brought his side back to within two runs on another solo shot off Tigers reliever Rony Garcia.

And in the ninth, in what had suddenly turned into a runaway for the Tigers, Roldani Baldwin came to the plate with two outs and the bases full, and he promptly unloaded them on a three-run double off Jose Cisnero.

That three RBI knock made it a 13-9 contest, which would go on to be Wednesday’s final score after Nolan Blackwood got Ryder Jones to line out to short.

Some observations from this loss:

Xander Bogaerts, in his spring debut at designated hitter: 0-for-2 with two strikeouts.

This game was not televised, but the fact that Heath Hembree has a 10.13 ERA through his first two appearances of the spring is far from promising. His roster spot could be in jeopardy if he continues to struggle.

Nice to see Ryan Brasier bounce back with two scoreless innings of relief Wednesday. Probably the highlight of the day pitching-wise.

Kevin Plawecki walked in his lone plate appearance of the afternoon after replacing Christian Vazquez behind the plate in the fifth. Jonathan Lucroy did not play.

Next up for the Red Sox, they’ll host the Houston Astros at JetBlue Park on Thursday afternoon.

Left-hander Kyle Hart will get the start for Boston, while right-hander Josh James will do the same for Houston.

As mentioned before, Hart is one of several candidates vying for a spot in the Sox’ starting rotation. He owns an ERA of 9.00 through two appearances (one start) this spring.

The Astros have been subject to plenty of boos from opposing crowds this spring, so it will be interesting to see, or hear about, how the JetBlue Park crowd handles things given the fact that the 2018 Red Sox are still under investigation by the league.

Anyway, first pitch Thursday is scheduled for 1:05 PM EST. This game will not be televised.