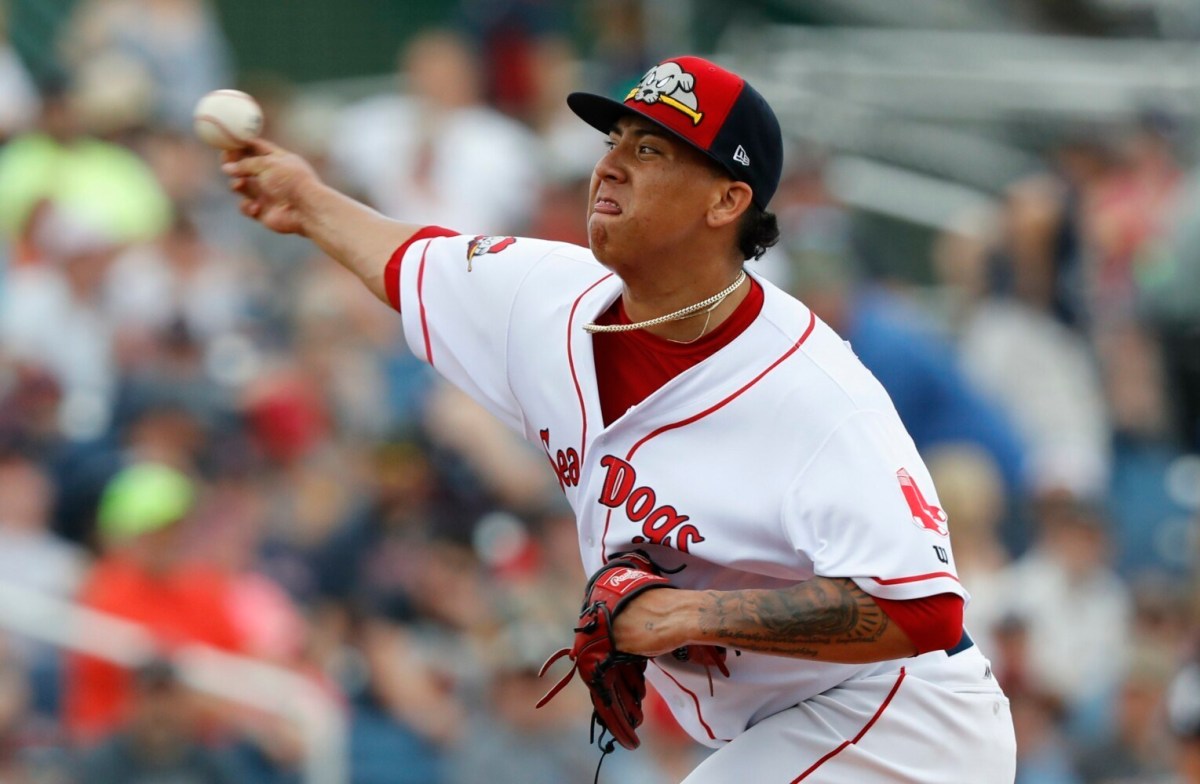 In case you missed it, the Red Sox will be sending six of their prospects to the Arizona Fall League this year, with right-handers Bryan Mata and Tanner Houck, left-hander Yoan Aybar, infielder C.J. Chatham, and outfielders Jarren Duran and Marcus Wilson all being assigned to the Peoria Javelinas on Wednesday.

Several of the Red Sox top 20 prospects will be in the AFL this year, playing for the Peoria Javelinas: RHPs Bryan Mata and Tanner Houck, OF Jarren Duran, SS/2B C.J. Chatham, OF Marcus Wilson will all be on the roster, as will be LHP Yoan Aybar.

Mata is listed as the top pitching prospect in Boston’s system and the third-highest overall behind only Triston Casas and Bobby Dalbec, per MLB Pipeline.

Since being promoted from High-A Salem to Double-A Portland at the beginning of July, the 20-year-old hurler has posted a 5.79 ERA and .296 batting average against over his first 10 Eastern League starts and 46 2/3 innings of work. He was the Sox’ lone representative in the All-Star Futures Game last year.

Houck, meanwhile, was converted from a starter to a reliever while with Double-A Portland in early July before being promoted to Triple-A Pawtucket on July 13th.

The former 2017 first round pick out of the University of Missouri is ranked as the fifth-best prospect in the Sox’ system.

Aybar is a bit of an interesting case, as he came up through the pipeline as an outfielder after signing as an international free agent out of the Dominican Republic six years ago.

The whole hitting thing never really panned out for Aybar though, with a career .624 OPS and all through his first four minor league seasons, so he began working as a pitcher in 2018.

The now 22-year-old held opponents to a .234 batting average while posting a 4.13 ERA over his first 17 outings as a reliever between the Gulf Coast League Red Sox and Low-A Lowell Spinners last year.

Fast forward to this season, and Aybar has allowed a total of 29 earned runs over 43 appearances and 55 2/3 innings between Class-A Greenville and High-A Salem. He is ranked as the No. 29 prospect in Boston’s system.

As for the position players, Duran has skyrocketed up the prospect boards, moving into the No. 4 spot in just his first full professional season after being selected in the eighth round of last year’s amateur draft out of Long Beach State.

The soon-to-be 23-year-old tore up the Carolina League to begin his 2019 campaign, slashing .387/.456/.543 to go along with 49 runs scored and 18 stolen bases over 50 games played before being promoted to Double-A Portland in early June.

Duran’s numbers have cooled off since then, but as I have mentioned before, to make the Futures Game in your first full season of professional baseball is quite the feat. Not to mention he was the lone prospect to represent the Sox in Cleveland as well.

Chatham, like Duran, has worked his way up through the Sox’ system in 2019, eventually earning a promotion to Triple-A Pawtucket on August 13th after posting a .297/.333/.403 slash line in 90 games with the Sea Dogs to begin the year.

Taken with the 51st overall pick in the 2016 amateur draft out of Florida Atlantic University, Chatham will need to be added to Boston’s 40-man roster in November in order to be protected from the Rule 5 Draft.

Set to turn 25 in December, the Florida native is currently the ninth-ranked prospect in the Sox’ system.

And finally, Wilson was the minor leaguer the Red Sox acquired from the Arizona Diamondbacks back in April in exchange for Blake Swihart, who has since been designated for assignment and outrighted to Triple-A by Arizona.

Since then, Wilson has been better for the most part, as he owns an OPS of .847 and wRC+ of 146 in his last 39 games with the Sea Dogs, although he is currently in the midst of an 8-for-39 slump over his last 10 contests going back to August 15th.