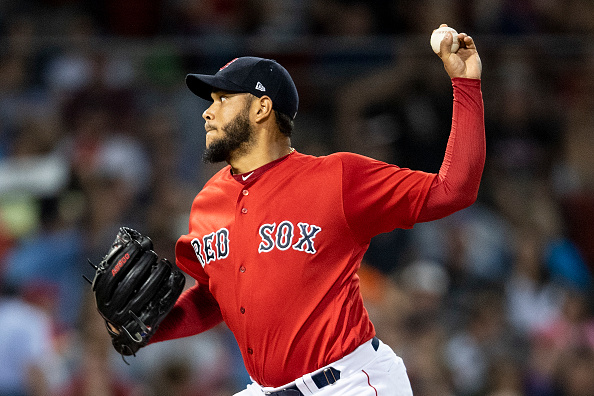 After cruising to a 9-1 win to open up a three-game weekend set with the Baltimore Orioles on Friday, the Red Sox took the series with a 4-0 shutout win over the O’s on Saturday to extend their winning streak to four and improve to 66-59 on the season.

Making his 26th start of the season for Boston and third against Baltimore was Eduardo Rodriguez, who came into the weekend having given up a season-high 10 hits in his last time out against the Cleveland Indians.

Working into the eighth inning this time around, the left-hander kept his former club off the scoreboard, scattering just four hits, two walks, and one HBP to go along with four strikeouts on the night.

The most trouble Rodriguez came into on Saturday came in the top half of the fourth, when a leadoff walk of Trey Mancini and two-out walk of Jonathan Villar put runners at first and second for Pedro Severino.

Rodriguez did not waver though, as he got the Baltimore backstop to ground into an inning-ending out at second and proceeded to sit down 10 of the next 12 Orioles he faced before yielding a one-out single to Hanser Albeto in the eighth, which is the point where the Venezuela native’s evening came to a close.

Finishing with a final pitch count of 106 (70 strikes), the 26-year-old hurler relied on both his four-seam fastball and changeup a combined 58% of the time he was on the mound Saturday, inducing four swings and misses with the heater and five with the change. He also topped out at 95.7 MPH with the four-seamer while Christian Vazquez was behind the plate.

.@eduardorod5 earned his career-high 14th win of the season. 👏 pic.twitter.com/CKqHoFW4tS

Ultimately earning his 14th winning decision to reach a new career-high while lowering his ERA on the season down to 4.10, Rodriguez will look to build on this strong performance in his next time out, which should come against the San Diego Padres next weekend.

In relief of Rodriguez, Matt Barnes entered the eighth with a four-run lead to protect and an inherited runner on at first, and he allowed that runner to advance to third on a Mancini single and wild pitch before escaping the jam by punching out Anthony Santander and Renato Nunez in consecutive order.

And in the ninth, Brandon Workman preserved the 4-0 shutout win by fanning a pair himself in a scoreless frame of relief.

On the other side of things, the Red Sox lineup was matched up against O’s right-hander Adrian Wojciechowski, someone who held them scoreless in Baltimore just last month.

Able to get on the board against the Orioles starter in his first ever appearance at Fenway Park, Brock Holt kicked off the scoring in the fifth with a bang, as he led the inning off by mashing his second home run of the season off a first-pitch, 90 MPH four-seamer at the top of the zone.

That was also Holt’s first homer since returning to the Sox after mourning the loss of his junior college baseball coach Derwood “Pops” Penney. A pretty special moment for him to say the least.

A Jackie Bradley Jr. triple to follow up that big fly kept the pressure on Wojciechowski, and he faltered even further by allowing Bradley Jr. to score from third on a wild pitch with Mookie Betts at the plate.

Fast forward to the seventh, with left-handed reliever Paul Fry in for Baltimore, and Betts put a runner in scoring position for Rafael Devers with a two-out double off the left field wall.

Three pitches later, Devers came through and doubled his side’s lead with a two-run, 365-foot blast off an 0-2, 93 MPH heater from Fry.

From the Eagle-Tribune’s Chris Mason:

"My mind immediately went to Pop. So I gave it one of these (chest taps) around second base, and then again at home plate just in case he wasn't watching the first one. Pretty special moment. Came in to a text message from his wife, so she was watching."https://t.co/T2QZPPhZP9

That's exactly what you're supposed to do to bad lineups.

With the Oakland Athletics and Tampa Bay Rays both winning on Saturday, the Red Sox still stand 6 1/2 games back of the Rays for the second American League Wild Card spot.

Next up for the Red Sox, it’s the finale of this three-game series on Sunday afternoon.

Right-hander Nathan Eovaldi will get the ball for Boston in his first start since April 17th, while left-hander Ty Blach will do the same for Baltimore.

Eovaldi is expected to throw between 55-60 pitches and hopes to work the first four innings Sunday before increasing his workload next week.

Blach, meanwhile, allowed seven runs, six of which were earned, in his Orioles debut against the New York Yankees on August 12th after being claimed off waivers from the San Francisco Giants earlier in the month.

The 28-year-old has never faced the Red Sox nor pitched at Fenway Park before in his career.