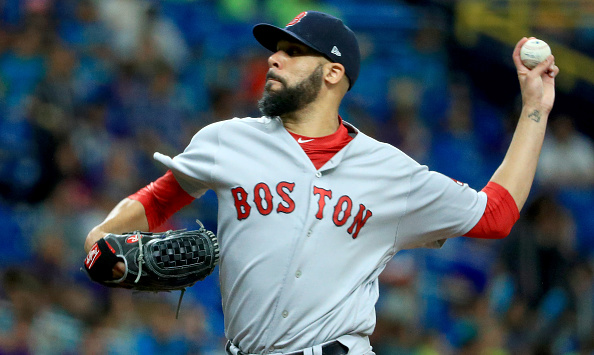 After just hanging on to take the middle game of their three-game set on Tuesday night, the Red Sox and Tampa Bay Rays were engaged in another one-run contest in the series’ finale on Wednesday. The only difference this time around being that it was Boston, not Tampa Bay, that fell by a final score of 3-2 under protest to drop back to 56-47 on the season.

Making his 19th start of the season for Boston and fourth against his former club was David Price, who saw his streak of five straight outings with at least five innings pitched and two or fewer earned runs given up come to an end in his last time out against the Baltimore Orioles.

Tossing six full innings in this one, the left-hander surrendered three runs, all of which were earned, on four hits and two walks to go along with eight strikeouts on the afternoon.

The first of these three Rays runs came across in the bottom half of the fourth, when after maintaining a no-hitter up until that point, Price served up a leadoff home run to outfielder Tommy Pham off a 1-1, 83 MPH changeup to cut the Sox’ lead in half at 2-1.

An inning later, three straight hits, with the last two going for RBI, from Michael Brosseau, Joey Wendle, and Guillermo Heredia to lead off the fifth gave Tampa Bay their first lead of the day at 3-2. A wild pitch was mixed in there as well.

It appeared as though Price’s then-solid start was on the brink of blowing up, but fortunately for Boston, the Tennessee native buckled down, got out of the fifth with an inning-ending double play, and sat down the side in order in the sixth, the point in which his day came to a close on a more positive note.

Finishing with a final pitch count of 98 (63 strikes), the 33-year-old hurler relied on his two-seam fastball nearly 35% of the time he was on the mound Wednesday, inducing zero swings and misses and topping out at 94.9 MPH with the pitch He also topped out at 93.7 MPH with his four-seamer, a pitch thrown 28 times while Christian Vazquez was behind the plate.

Ultimately falling to 7-4 while raising his ERA on the season from 3.61 to 3.66, Price’s 20th start of the year should come against this same Rays club once again next Tuesday.

In relief of Price, Heath Hembree came on for the bottom of the seventh and got the first two outs of the frame, but not before allowing a pair of Rays to reach on a one-out double and intentional walk of Ji-Man Choi, which in turn led to Colten Brewer coming on to face Travis d’Arnaud.

Brewer proceeded to walk d’Arnaud on six pitches to fill the bases for a dangerous Pham, but won that battle by getting the outfielder to ground out to Rafael Devers at third.

The bottom half of the eighth inning is where things got a bit sticky, and that was due to what transpired in the top half of the frame, which I’ll explain later.

Regardless of that, left-hander Josh Taylor had to wait nearly 10 minutes until this contest was ready to resume, and with it now under protest, worked his way around a one-out walk in an otheriwise clean frame of relief to keep his side within the one run they trailed by.

On the other side of things, the Red Sox lineup was matched up against Rays right-hander and two-time All-Star Charlie Morton, someone who entered the finale on Wednesday with a league-best 2.90 ERA on the season.

Starting the scoring in the third inning for Boston, a Brock Holt leadoff single and Mookie Betts two-out double brought Rafael Devers to the plate with runners at second and third.

On the third pitch he saw from Morton, a 2-0, 80 MPH curveball, Devers snuck a two-run single to left field with the Rays infield playing in, allowing both Holt and Betts to easily score to give the Red Sox their first lead of the afternoon at 2-0.

Putting the ball where they're not. ¯_(ツ)_/¯ pic.twitter.com/SKWSyFxTdw

Other than that though, Morton dominated the rest of the way, as he retired 14 of the final 15 Red Sox hitters he faced after giving up that single to Devers.

Heading into the eighth trailing by one run, the Boston bats were greeted by Rays left-handed reliever Adam Kolarek to begin the inning.

Sam Travis, pinch-hitting for Jackie Bradley Jr., popped up to first for the first out of the frame, and that led to Rays manager Kevin Cash making the call to his bullpen for right-hander Chaz Roe with Betts due up next for Boston.

The only thing was, instead of making a conventional change, Cash put Kolarek in as the first baseman, thus removing Choi from the game.

Betts, too, flied out to left for the second out, so Cash went back out to bring Kolarek back in to pitch against the left-handed Devers, which in turn led to Nate Lowe replacing Roe at first.

What ensued after that was somewhat head-scratching, as Sox manager Alex Cora argued that since Kolarek took the spot of Austin Meadows in Tampa Bay’s lineup, the Rays should then have to forefiet the designated hitter. Essentially, the Rays could have had 10 players in a nine-man lineup.

I’m not the most fit to explain this, so here are some tweets from WEEI’s Rob Bradford to clarify:

Announcement: Protest is due to the placement of the substitutes in the lineup following the removal of the DH. (Hope that clears it up)

From pool reporter: Angel Hernandez said that Cash never specified where Kolarek would hit when moved to first base. He said there is rule that states in such a case it is umpire's discretion to place hitter in spot in lineup.

Either way, all that came out of this was that the game was protested by Cora and Kolarek was able to remain in the game as the pitcher. He got Devers to ground out to first of all places for the final out of the inning after a 20-minute delay. Fun times!

Finally, in the ninth, Xander Bogaerts, J.D. Martinez, and Andrew Benintendi all went down in order against right-hander Emilio Pagan, and 3-2 would wind up being Wednesday’s final score.

Some notes from this loss, which is still under protest:

Cora says Rays kept the DH, meaning they had a pitcher, first baseman, pitcher and DH in the lineup. "Hard to explain…there's a lot. Illegal substitutions but we'll see what happens."

J.D. Martinez has multiple hits in four of his last five games.

So, the Red Sox finish their six-game road trip with a 3-3 record and have won two of their first three games as part of this pivotal 14-game stretch against the Rays and New York Yankees.

Speaking of the Yankees, the Red Sox will welcome the American League East leaders to Fenway Park for the first time this season to kick off a four-game weekend series on Thursday night.

Right-hander Rick Porcello will get the ball for Boston in the opener, while fellow righty Masahiro Tanaka will do the same for New York.

Last time these two hurlers matched up against each other, their teams combined for 30 total runs in the opening game of the London Series back on June 29th. Porcello and Tanaka themselves combined to record just three total outs.

In his career against New York, Porcello owns a lifetime 3.68 ERA and .250 batting average against over 24 total starts and 146 2/3 innings pitched.

Tanaka, meanwhile, has posted a career 4.82 ERA and .257 batting average against in 19 previous starts against the Red Sox.

Since tossing that seven-inning shutout against the Minnesota Twins on June 27th, Porcello has yielded five, six, six, four, and six runs in each of his last five outings. That’s good for an ERA of 10.57. Not ideal.