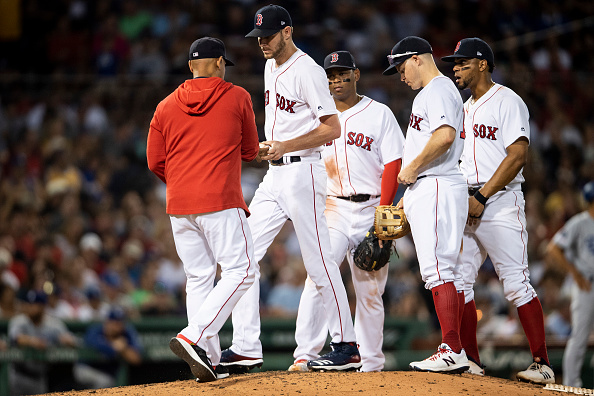 After opening up an important three-game series against the Los Angeles Dodgers with a convincing 8-1 victory on Friday, the Red Sox fell back to earth less than 24 hours later, falling to the reigning National League champions by a final score of 11-2 on Saturday to snap a five-game winning streak.

Making his 19th start of the season for Boston was Chris Sale, who entered Saturday having given up four or more runs in all of his last three outings.

Working into just the fifth inning this time around, the left-hander yielded another five runs, all of which were earned, on seven hits, one walk, and one HBP to go along with seven strikeouts on the night.

The first of those five Dodgers runs came right away in the first, when a leadoff walk of Chris Taylor came back to bite Sale on a two-out, RBI single off the bat of A.J. Pollock put the Red Sox in an early hole.

Following a second inning in which he retired the side in order, Dodgers third baseman widened the gap even further by taking Sale deep to left on a one-out, first-pitch, 91 MPH fastball down the heart of the plate, making it a 2-0 game.

Again, the Florida native recovered nicely, sitting down four of the next hitters he faced before ultimately meeting his doom in the top half of the fifth.

There, a leadoff single from Kike Hernandez and an Austin Barnes HBP put runners at first and second with one out for Turner.

This time, on a 2-2 slider from Sale, Turner ripped a line-drive double to left, plating Hernandez and moving Barnes up to third.

A brief mound visit made no difference in the next at-bat, as David Freese followed suit with another run-scoring two bagger to left, this one scoring both Barnes and Hernandez to put the Dodgers up 5-1.

Sale remained in and got Cody Bellinger to line out to right for the second out of the frame, but his disappointing evening would come to a close right after that.

Finishing with a final pitch count of 92 (57 strikes), the 30-year-old hurler relied on his four-seam fastball more than 43% of the time he was on the mound Saturday, inducing three swings and misses and topping out at 96.7 MPH with the pitch while Sandy Leon was behind the plate.

Falling to 3-9 on the year with his ERA inflating up to 4.27, the last few weeks have clearly been a difficult time for Sale. It’s not a Christian Vazquez or Sandy Leon problem. It’s a Chris Sale problem, and that falls on the Red Sox’ coaching staff, per manager Alex Cora.

Alex Cora takes responsibility for Chris Sale's poor performance of late.
"We need to get this right. And that's on us, the coaching staff."

Sale’s next start should come against the Toronto Blue Jays next Thursday, a team that has given him plenty of trouble so far this season.

In relief of Sale, Heath Hembree came on with a runner on second and one out to get, and he did just that by punching out Max Muncy on five pitches after plunking Pollock.

From there, Colten Brewer worked his way around a pair of walks in a scoreless sixth, and Steven Wright served up back-to-back one-out solo jacks to Bellinger and Pollock in the seventh before taking a comebacker off his foot on a Muncy comebacker.

Marcus Walden entered in place of Wright, and he officially closed the book on the knuckleballer’s outing by getting Corey Seager to ground out to Christian Vazquez at first, but in his first ever start at first, Vazquez made the mistake of trying to lead Rafael Devers with a throw across the field which got through to shallow left and allowed Muncy to score all the way from first.

Bad decision by Vazquez after a play with the shift on meaning Devers had to cover 2B. pic.twitter.com/wHNq4oo50w

Walden also surrendered a run of his own by walking Hernandez with two outs and giving up an RBI triple to Barnes, which should have been caught by Andrew Benintendi in the first place.

It was not, however, and the Dodgers went up 9-2 because of it.

Ryan Brasier allowed a run on a Bellinger sacrifice fly in his lone inning of work in the eighth, and Hector Velazquez got taken deep by Muncy to lead off the ninth in an otherwise scoreless frame. That Muncy homer gave Los Angeles an 11-2 advantage.

On the other side of things, the Red Sox lineup was matched up against right-hander Ross Stripling, who has worked both out of the rotation and bullpen for the Dodgers this season.

Starting the scoring for Boston Saturday was Xander Bogaerts, picking up right where he left off on Friday by blasting his 19th big fly of the year 386 feet off the left-most light tower in left field to tie this contest back up at one run apiece.

Swing it then sling it. pic.twitter.com/HEMfkmXe2v

Fast forward to the sixth, with Stripling done and old friend Joe Kelly in for the Dodgers, Bogaerts struck again, driving in Mookie Betts from third on another one-out knock, this one an RBI single to right field to pull his team back to within three runs.

A six-pitch walk drawn by Andrew Benintendi and wild pitch from Kelly put runners in scoring position with two outs for Christian Vazquez, but the former Red Sox flame thrower won the battle, fanning his old battery mate on a 3-2, 98.4 MPH heater to end the threat.

That was all the offense the Sox could muster, as they went 0-for-their-last-9 over the final three innings, and this one concluded with a final score of 11-2.

The Red Sox are 44-29 in games not started by Chris Sale this season.

The Red Sox’ 4-6 hitters (J.D. Martinez, Andrew Benintendi, Christian Vazquez) on Saturday: 0-for-11 with one walk and five strikeouts.

Next up for the Red Sox, it’s the series finale of this World Series rematch on Sunday night.

Left-hander David Price will get the start for Boston, while fellow southpaw and National League All-Star Game starter Hyun-Jin Ryu will do the same for Los Angeles.

Holding opponents to a .233 batting average against over his last four starts going back to that meltdown against the Texas Rangers, Price enters Sunday with a rotation-best 3.24 ERA on the 2019 season.

In two prior career starts against the Dodgers, Price owns a lifetime 2.25 ERA over a small 12 inning sample size.

Ryu, meanwhile, currently owns the lowest ERA in the National League at 1.73 through 17 starts on the year.

The 32-year-old got the start for Los Angeles in Game 2 of the 2018 Fall Classic, where he allowed four runs on six hits over 4 2/3 innings and eventually took the loss. That’s the only experience he has at Fenway Park.