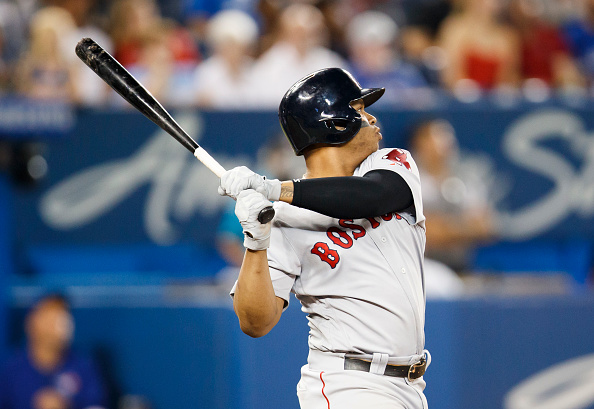 After getting swept by the New York Yankees in the first ever London Series over the weekend and an off day on Monday, the Red Sox opened up a three-game series against the Toronto Blue Jays in a monumental way on Tuesday, topping their divisional foes by a final score of 10-6.

Making his 15th start of the season and second against his former club for Boston was David Price, who gave up two unearned runs over five innings in his last Rogers Centre appearance on May 20th.

Tossing six full innings this time around, the left-hander allowed another two runs, both of which were earned, on four hits and a season-high four walks to go along with seven strikeouts on the night.

The first of those two Toronto tallies came in the bottom half of the second, when with two outs and runners on the corners, Danny Jansen drove in his side’s first run on a line-drive RBI double to left off a 2-1 84 MPH changeup.

It could have been worse for Price in that same frame, as he proceeded to load the bases on his third walk of the contest, but he managed to get rookie phenom Vladimir Guerrero Jr. to fly out to center to retire the side.

From there, the Tennessee native stringed together three straight perfect innings before running into more trouble in the bottom of the sixth, which was caused by a leadoff walk of Lourdes Gurriel Jr.

Four batters and two outs later, Freddy Galvis beat out an infield single, plating Gurriel Jr. from third to make it a 7-2 game.

Price rallied by fanning the next and last hitter he faced in Brandon Drury on four straight strikes, and that is how his fine outing came to a close.

Finishing with a final pitch count of 93 (60 strikes), the 33-year-old hurler turned to his two-seam fastball nearly 39% of the time he was on the mound Tuesday, inducing two swings and misses with the pitch. He also got seven whiffs on 26 changeups and topped out at 94.2 MPH with his four-seamer, a pitch he threw 19 times while Christian Vazquez was behind the plate.

Improving to 6-2 while lowering his ERA on the season down to 3.33, Price’s successful run when pitching north of the border continues. He’ll look to build on a positive start to the new month in his next time out, which should come on Sunday against the Detroit Tigers in the final game before the All-Star break.

In relief of Price, Colten Brewer came on in the seventh with a six-run lead to protect, and he let that cushion shrink to five by serving up a leadoff home run to Jansen in an otherwise scoreless inning.

Josh Taylor got the call for the eighth, and the left-hander worked around a one-out single with the help of an inning-ending 4-6-3 double play off the bat of Galvis.

Finally, in the ninth, 25-year-old right-hander Trevor Kelley made his big league debut for Boston after being recalled from Triple-A Pawtucket on Monday, and he surrendered three runs on two hits but held on to secure the 10-6 win with a six-pitch punchout of Justin Smoak, the first of his career.

On the other side of things, the Red Sox lineup was matched up against Blue Jays rookie right-hander Trent Thornton, who held Boston to just two runs over 6 1/3 innings in his first career start against them back on June 21st.

Starting the scoring right away in the first inning, Rafael Devers got his team on the board by following up a Mookie Betts leadoff single with a two-run, 419-foot shot to right-center field on the very first pitch he saw from Thornton.

A Xander Bogaerts double kept the pressure on the Toronto starter, and Christian Vazquez kicked off a solid night at the plate three batters later by ripping a two-out, opposite field RBI ground-rule double.

Jackie Bradley Jr. made it a 4-0 contest by taking a 1-0 79 MPH slider and lining it to right field for another RBI single to drive in Vazquez, and the Red Sox were in command.

In the second, Bogaerts picked up his first and only RBI of the night by grounding into a force out at second, which gave Betts more than enough time to come in and score from third. 5-0.

An inning later, with two outs and the bases full, Devers added two more runs to his team’s total with another two-run hit, this one a simple single through the right side of the infield, which consequently gave Thornton the early hook. 7-1.

Rafael Devers with his third and fourth RBI of the night! pic.twitter.com/NTP4LQzq9H

Fast forward all the way to the seventh, and Vazquez struck again, taking new Jays reliever Derek Law deep to left field for his 12th big fly of the season, a two-out, 438-foot booming shot that put the Red Sox up 8-2.

Devers rejoined the home run-hitting frenzy in the top half of the eighth, making right-hander Joe Biagini pay for walking Betts on four straight balls the at-bat prior by launching another two-run shot deep to the opposite field, this one, his 14th of the year, had a projected exit velocity of 100.5 MPH and traveled 381 feet.

*DJ Khaled voice* ANOTHER ONE! pic.twitter.com/JytJiQ5AQV

That gave Boston a 10-3 advantage, and after the Jays made some noise of their own in the ninth, 10-6 would go on to be Tuesday’s final score.

Rafael Devers’ Tuesday night: 4-for-5 with two home runs and six RBI to tie a career-high. Here are the exit velocities for all of Devers’ batted balls:

The Red Sox have recorded 15+ hits in 4 consecutive games for the first time in 81 years (last: September 1938). They are the first team to do that since the 2015 Diamondbacks.

Next up for the Red Sox, it’s the middle game of this three-game set on Wednesday.

Left-hander Chris Sale will get the ball for Boston, while another rookie right-hander in the form of Jacob Waguespack will do the same for Toronto.

After allowing just one unearned run in his first two June starts, Sale finished the month by posting a 5.29 ERA over his last three, including a five inning performance against the Jays in which he surrendered four runs (three earned) on seven hits and two walks.

In nine prior outings (eight starts) at Rogers Centre, Sale owns a lifetime 1.60 ERA to go along with a .161 batting average against over 62 total innings of work.

Waguespack, meanwhile, will be activated from the 10-day injured list for Toronto on Wednesday.

The 25-year-old only has one previous big league outing under his belt back on May 27th, when he yielded three runs (two earned) over four innings of relief in an 8-3 loss at the hands of the Tampa Bay Rays.