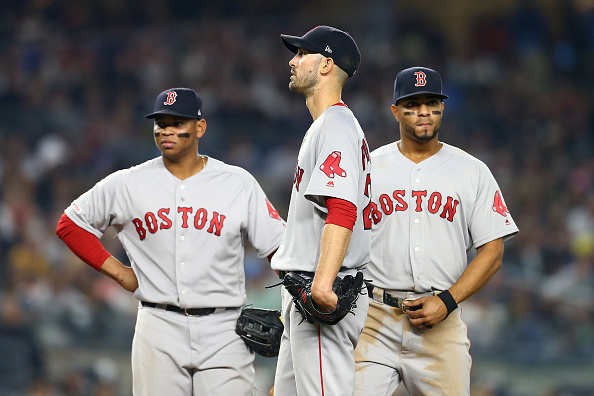 After wrapping up their May with a series-opening 4-1 loss to the New York Yankees Friday night, the Red Sox opened up their June in similar fashion Saturday, falling to the Bronx Bombers by a final of 5-3 to mark their fourth consecutive defeat and fall back to 29-29 on the season.

Making his 12th start of the season for Boston was Rick Porcello, who came into the new month fresh off a win in his last time out against the Cleveland Indians last Monday, which just so happens to be the last time the Red Sox won a game.

Pitching into only the fifth inning this time around, the right-hander yielded five runs, all of which were earned, on nine hits and one walk to go along with five strikeouts on the night.

The first three of those five New York runs came around to score in the second, an inning in which Porcello struggled mightily, to be frank.

In total, the Yankees sent eight men to bat in their half of the second, with five of the first six reaching and Gio Urshela and Brett Gardner driving in a combined three runs on a pair of RBI singles to put their team ahead by two runs early.

From there, Porcello settled in by retiring the next nine hitters he faced in order and it looked as though he was on his way to a quality outing heading into the fifth.

There, Luke Voit put an end to Porcello’s impressive run by reaching base on a one-out single to center.

A one-pitch groundout from Aaron Hicks put the New Jersey native just one out away from escaping another potential jam, but slugging Yankees backstop Gary Sanchez ceased any hope of that happening by working his way back from an 0-2 hole and demolishing a 2-2 slider 403 feet to center field.

A 5th of Kraken. pic.twitter.com/uVNXxPsCAW

Porcello’s night would come to a close shortly after serving up that bomb, as he allowed the next and last two hitters he faced in the fifth in Gleyber Torres and Kendrys Morales to reach base and give the Yankees another opportunity to tack on some more runs.

Finishing with a final pitch count of 94 (65 strikes), the 30-year-old hurler turned to his slider more than 34% of the time he was on the mound Saturday, inducing two swings and misses with the pitch. He also topped out at 92.5 MPH with his four-seam fastball, a pitch he threw 23 times and got four swings and misses on with Sandy Leon behind the plate.

Dropping to 4-5 while his ERA on the season inflated up to 4.76, Saturday marked the first time since April 13th that Porcello was unable to provide the Red Sox with at least five innings pitched. He’ll look for improved results in his next time out, which should come against the Tampa Bay Rays sometime next weekend.

In relief of Porcello, the Red Sox bullpen put together another solid performance, and it started with Marcus Walden working his way around the mess he inherited and a HBP of Clint Frazier to keep the Yankees off the scoreboard with the bases loaded in the fifth.

Walden also added on to what was a bounceback effort after a rough outing in his last time out against the Indians by twirling a scoreless sixth.

From the middle of the seventh inning on, Brandon Workman and Matt Barnes both contributed with a scoreless frame a piece to keep their team within the two runs they trailed by. And although it didn’t make all that much a difference in the end, the Red Sox bullpen has yet to give up a single run in this series.

On the other side of things, the Red Sox lineup was matched up against Yankees right-hander and American League wins leader Domingo German, who entered Saturday with nine winning decisions on the season to this point.

Facing off against Boston for just the third time in his career, German was vulnerable, and it was Xander Bogaerts who exposed that first with a leadoff single in the second.

One Brock Holt single and two additional batters later, Sandy Leon got his team on the board first by ripping a two-out RBI single to right-center field, plating Bogaerts from second and giving the Red Sox the early one-run advantage.

Fast forward to the fourth, and it was Bogaerts leading things off with a bang yet again, this time mashing his 11th home run of the season off the Yankees right-hander to pull his team back to within one run.

Sound UP for this Xander 💣. pic.twitter.com/Lnd9QfihFU

That one-run deficit would not last too long though, as Leon, like Bogaerts, came through once more with a one-out RBI single to drive in Holt from second and knot this one up at three runs each.

German would be chased from this contest in the inning, which you would think to be a positive development for the Red Sox. Instead, the Yankees bullpen proved how much of a beast they are by holding the Boston bats in check over the final 5 1/3 Saturday.

Oh, they had their chances, like in the fifth, with JD Martinez and Xander Bogaerts at second and third with one out in the inning. Nothing against Chad Green.

Or how about the sixth against Tommy Kahnle and then Adam Ottavino? Betts and Leon at first and second with one out. Nothing again.

In the eighth, the Sox had the tying run at the plate after Eduardo Nunez drew a one-out, pinch-hit walk off left-hander Zack Britton. In comes Christian Vazquez, pinch-hitting himself for Sandy Leon following his first three-hit game of 2019, and he grounds into an inning-ending 4-6-3 double play.

And in the ninth, facing off against vaunted closer Aroldis Chapman, both Betts and Andrew Benintendi reached base to leadoff the inning, bringing the go-ahead run to the plate in the form of JD Martinez, the ideal hitter for the job.

Instead of reaching base himself or at least advancing the runners though,  Martinez grounded into another 4-6-3 double play to snuff Benintendi out at second and leave Betts alone at third.

Down to their final out and still representing the tying run, Rafael Devers hacked at the first pitch he saw from Chapman, perhaps thinking fastball, but instead got an 86 MPH slider towards the outer half of the plate, one in which the young infielder grounded to Luke Voit at first, and this contest came to a close with a final score of 5-3. Another frustrating night.

Rafael Devers’ 11-game hitting streak has come to an end.

Michael Chavis is 1-for-his-last-15 with one RBI and one walk.

The Red Sox’ 1-4 hitters went 3-for-19 with two walks and six strikeouts Saturday.

The Red Sox went 2-for-14 with runners in scoring position Saturday and left a total of 10 men on base.

Xander Bogaerts has multiple hits in four of his last five games.

The Red Sox are 0-4 against the New York Yankees this season.

Losers of four in a row now, the Sox now sit 9.5 games behind the Yankees in the American League East standings on just the second day of June.

Again, if they have any plans on contending for the division this season, now would be the time, but that’s not how things are looking at the moment. I don’t know what it is, but it just feels like this team is missing something.

Looking to avoid the sweep on Sunday, it will be David Price getting the ball for Boston under the lights at Yankee Stadium, a venue that has given the left-hander plenty of issues over his illustrious career.

In his latest start after dealing with flu-like symptoms in Houston, Price fanned six and scattered three hits over six quality innings against the Indians this past Tuesday.

Opposite Price will be another veteran southpaw in CC Sabathia for New York, making his first start since May 22nd after spending time on the injured list with right knee inflammation.

Currently sitting at 3-1 with a 3.48 ERA on the season, Sabathia owns a lifetime 4.14 ERA over 42 career starts against the Red Sox.

First pitch Sunday is scheduled for 7:05 PM EDT on ESPN. Red Sox looking to avoid a double-digit game deficit in the division.