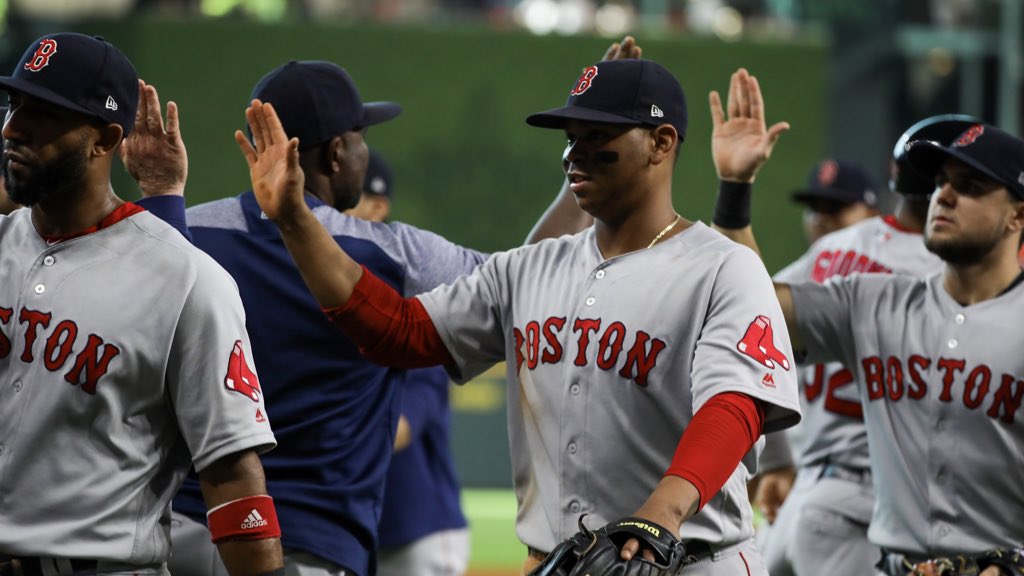 Making his 11th start of the season for Boston was Eduardo Rodriguez, whose spot in the rotation did not come up the last time these two clubs met a week ago.

This time around, the left-hander thoroughly impressed Sunday, tossing six innings of one-run ball on four hits, one walk, and one HBP to go along with five strikeouts on the afternoon.

That lone run came in Rodriguez’s first inning of work, when an Aledyms Diaz leadoff single resulted in Houston getting on the board with a two-out RBI infield single off the bat of Saturday’s hero Carlos Correa to plate Diaz from second.

The thing is, that run could have been prevented had Eduardo Nunez, filling in for Xander Bogaerts at shortstop, made a better throw to the plate and  if Christian Vazquez didn’t lose the ball on the attempted tag of Diaz.

Other than that one blip though, Rodriguez had a relatively simple time of things in this one, consistently maneuvering his way around the few baseruners he had to deal with while also receiving some help from his defense.

Red Sox challenge call that Carlos Correa is safe at 1B in the 6th; call overturned, runner is out. Powered by @Mitel. pic.twitter.com/7ay9SHoyBc

Retiring 11 of the last 12 hitters he faced, the 26-year-old’s fine day came to a close after getting Yuli Gurriel to pop out to second and end the sixth with his team ahead.

Finishing with a final pitch count of 98 (63 strikes), Rodriguez turned to his four-seam fastball 39% of the time he was on the mound Sunday, inducing two swings and misses and getting 13 called strikes with the pitch. He also topped out at 94.4 MPH with it in the fifth inning.

Improving to 5-3 on the year while lowering his ERA down to 5.04, the Venezuela native provided the Red Sox with a start they very much needed after the whole David Price situation the day before. Rodriguez will look for win number six in his next time out, which will come against the New York Yankees at Yankee Stadium sometime next weekend.

In relief of Rodriguez, Brandon Workman got the first call out of the Red Sox bullpen with a two-run lead to protect going into the bottom half of the seventh.

Making his 26th appearance of the season and first of the series, Workman fanned a pair in a 1-2-3 inning before making way for Matt Barnes in the eighth.

Fresh off of getting walked off on on Saturday night, Barnes did allow the tying run to come to the plate with a one out walk of Tony Kemp, but did recover by sitting down the next two hitters he faced to send this one to the ninth.

And in that ninth and final inning, after his team tacked on an extra insurance run in the top half, Marcus Walden shut the door on the Astros to earn his first save of 2019 and lock up the 4-1 win for the Red Sox.

On the other side of things, the Red Sox lineup was matched up against veteran right-hander and future Hall of Famer Justin Verlander for the Astros, who like Rodriguez, did not pitch in the series at Fenway Park.

Going down by one run right away in the first, a Steve Pearce leadoff single later turned into Boston’s first run of the afternoon crossing the plate on a one-out sacrifice fly off the bat of Andrew Benintendi to knot this one at one all.

An inning later, Rafael Devers’ hot streak continued, as the 22-year-old led off the fourth by demolishing his seventh home run of the season 423 feet to dead center field to give his team a lead they would not have to look back from.

The roof ain't getting this one! pic.twitter.com/FFYbTpjjPJ

In the fifth, the Boston bats capitalized on some sloppy defense from the Astros infield, with Nunez scoring all the way from second thanks to Yuli Gurriel misplaying a grounder from Andrew Benintendi, who reached first safely with one out in the inning.

The Astros committed another error in the same time frame courtesy of Alex Bregman over at third, but the Sox were unable to capitalize there.

And finally, in the ninth, more misjudgements allowed Boston to push another run across, with reliever Framber Valdez letting Jackie Bradley Jr. advance to second after drawing a one-out walk and also advance to third on a ball that got past Robinson Chrinos behind the plate.

That particular sequence of miscues set up Eduardo Nunez in a prime RBI spot, and he took full advantage by driving in his club’s final run of the day on an RBI grounder to second which gave Bradley Jr. more than enough time to score from third and make it a 4-1 contest, which would go on to be Sunday’s final score.

Most recent Red Sox to record an extra-base hit in 6 consecutive games, all at the age of 22 or younger:

From the Boston Globe’s Pete Abraham:

Is he one of the best 3B in the AL right now?

Next up for the Red Sox, it’s a quick turn around with a three-game series against the Cleveland Indians set to kick off Monday evening back at Fenway Park.

Coming off a 4-3 road trip, this one home series will be all for the Sox before they head back out on the road again later this week.

Despite their reputation, the Indians are no longer the best team in their division at the moment, as that title currently belongs to the 36-16 Minnesota Twins, while the Tribe sit at an even 26-26.

Right-hander Rick Porcello is set to get the ball for the Red Sox in the series opener, while fellow righty Jefry Rodriguez will do the same for Terry Francona’s Indians.

Over his last seven starts dating back to April 20th, Porcello owns a 2.78 ERA and .196 batting average against over 45.1 innings pitched. The Red Sox are 6-1 in that span.

In 24 career starts against Cleveland, Porcello has posted a lifetime 3.57 ERA over 141 total innings of work.

Rodriguez, meanwhile, has never faced the Red Sox before in his young big league career. The 25-year-old is currently 1-4 with a 4.08 ERA through six starts so far this season.