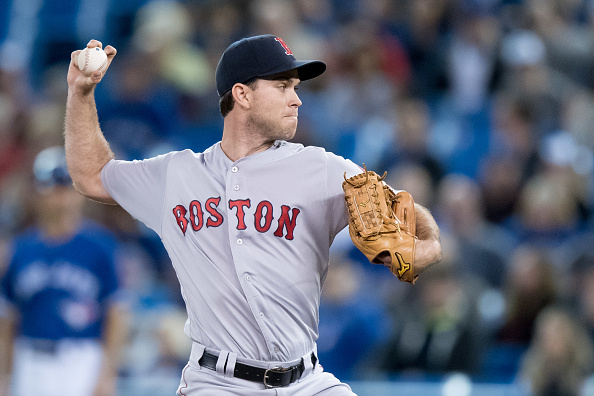 After needing 13 innings to top the Blue Jays in a marathon game on Wednesday, the Red Sox needed just nine innings to wrap their four-game set with Toronto up on Thursday, taking the series finale by a final score of 8-2.

Making his first start and fourth overall appearance for Boston was Ryan Weber in what was supposed to be a bullpen day for the Red Sox.

As it turned out though, the right-hander worked the first six innings of this one, yielding just one run while scattering three hits, one HBP, and zero walks to go along with four strikeouts on the afternoon.

That one run came in the second, when with no outs and runners on first and second, a Freddy Galvis RBI double put Toronto on the board.

It looked as though things really could have taken a turn for the worst there with three straight Blue Jays reaching base to leadoff the inning, but Weber rallied by sitting down the next three hitters he faced to get out of the jam and didn’t have to look back from there.

Retiring 15 of the last 16 hitters he faced, the 28-year-old hurler’s fine outing came to a close with a six-pitch lineout of Rowdy Tellez to end the sixth.

Finishing with a final pitch count of 93 (59 strikes), Weber relied heavily on his sinking fastball, turning to the pitch nearly 55% of the time he was on the mound Thursday with Christian Vazquez behind the plate. He also induced three swings and misses and topped out at 90 MPH with the same sinker.

Although his ERA did slightly inflate to 1.29 on the season, Weber did earn his first winning decision in a Red Sox uniform to improve to 1-0 on the year. At this point, it’s not known if the Florida native will remain in Boston’s rotation, but if he does, his next start will likely come sometime next week back at home against the Cleveland Indians.

In relief of Weber, the recently called up Travis Lakins came on for his second career appearance out of the Sox bullpen in the seventh and worked his way around a leadoff double in an otherwise perfect frame of work with the help of the infield behind him.

From there, Ryan Brasier recorded his third consecutive scoreless appearance with a 1-2-3 eighth before Hector Velazquez allowed one run on a Justin Smoak home run in the ninth en route to securing the 8-2 win for his team.

On the other side of things, the Red Sox lineup was matched up against veteran left-hander Clayton Richard for the Blue Jays, making his first start of 2019 after opening up the season on the injured list.

Opening up the scoring for Boston in this one was the hitter responsible for Wednesday’s win in Michael Chavis, whose third inning RBI groundout to plate Eduardo Nunez from third put the Sox on the board.

That was all they could muster off of Richard, and it wasn’t until the top half of the sixth when the bats really started to get going.

With Sam Gaviglio in for Toronto to start the inning, a leadoff single from Xander Bogaerts followed by back-to-back RBI base knocks off the bats of Rafael Devers and Steve Pearce broke the 1-1 tie and gave Boston the two-run advantage.

Another scorcher off the bat of Rafael Devers. pic.twitter.com/YegtHEd9AK

An inning later, it was more of the same against Jays reliever Elvis Luciano, this time with Jackie Bradley Jr, Michael Chavis, and Mookie Betts reaching base to leadoff the seventh and the reigning American League MVP collecting his 25th RBI of the year on a line-drive double to score Bradley Jr. from third and make it a 4-1 contest.

In the eighth, an Andrew Benintendi leadoff single would result in another insurance run being pushed across on an RBI single from Eduardo Nunez moments later. 5-1.

And finally, in the ninth, Devers and Pearce capped off fine days at the plate, with the former driving in Bogaerts from second on an RBI infield single, and the latter coming through with his first home run of the season, a two-out, 399 foot two-run shot to left off Toronto reliever Ryan Feierabend.

Pearce’s third knock of the afternoon made it an 8-1 game, and after the Blue Jays tacked on a run of their own in their half of the ninth, 8-2 would go on to be Thursday’s final score.

Before Thursday, Ryan Weber hadn’t won a big league game since April 19th, 2016 when he was a member of the Atlanta Braves.

Next up for the Red Sox, it’s off to Houston for another three-game weekend series against the Houston Astros.

The ‘Stros took two out of three from the Sox at Fenway Park last weekend in what was a tightly-contested series outside of a few poor innings.

In the opening game, it will be a pitching matchup featuring a pair of left-handers representing Red Sox present and past, with Chris Sale getting the ball for Boston and Wade Miley doing the same for Houston.

Last time these two southpaws met up this past Sunday, Sale allowed three runs and struck out 10 over 5.1 innings while Miley surrendered three runs, two of which were earned,  in five innings of work. The Red Sox won that game 4-3.

First pitch of the series opener on Friday is scheduled for 8:10 PM EDT on NESN.