Following a historic Wednesday night in which they saw their win total reach 100 for the first time since 1946, the Red Sox went into Thursday looking to complete the series sweep in their last game against the Toronto Blue Jays this season.

Making his 22nd start of the year on Thursday, Eduardo Rodriguez looked much better than he did in his last time out against the Houston Astros, an outing in which he surrendered five earned runs in less than four innings.

Pitching six full frames in this one, the left-hander allowed just one Toronto run to cross the plate while scattering five hits and zero walks to go along with seven strikeouts on the night.

That lone run came in the top half of the third inning, when with two outs and a runner at second, Blue Jays first baseman Justin Smoak grounded an RBI single up the middle to drive in Lourdes Gurriel.

Fortunately for the Red Sox, Rodriguez bounced back after that by retiring 10 of the final 11 hitters he faced, including a four pitch strikeout of Randal Grichuk with two outs in the sixth, to wrap up his evening on a more positive note.

Finishing with a final efficient pitch count of 78 (52 strikes), the Venezuela native, who was caught by Christian Vazquez once again, had a more solid pitch mix than he did this past Saturday. 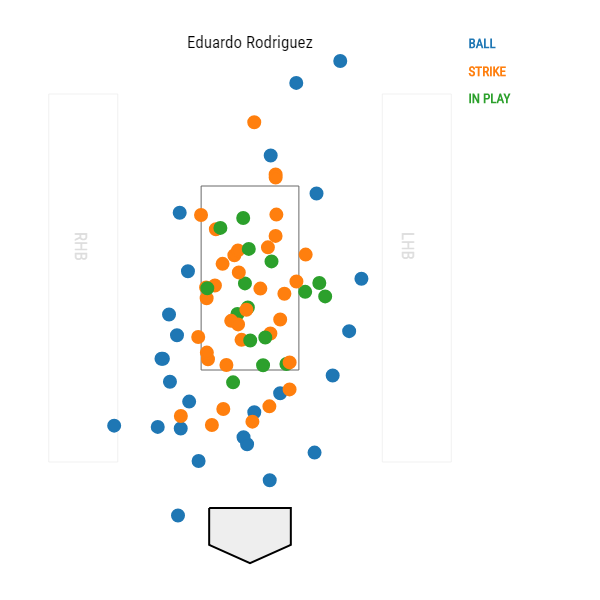 Out of those 78 pitches, Rodriguez threw 17 changeups, 16 two-seam fastballs, 16 sliders, 16 four-seam fastballs, and 13 cutters, which resulted in a total of nine swinging strikes and 17 called strikes.

He also topped out at 93.9 MPH with both the two and four-seamer in the third and fifth innings.

Unable to pick up a well-deserved winning decision despite leaving with his team ahead, Rodriguez did manage to lower his ERA on the season down to 3.53 in his third start since returning from the disabled list.

He’ll look to build on this solid outing in his next time out, which should come against the New York Yankees sometime next week.

In relief of Rodriguez, the Red Sox bullpen was responsible for the final three innings of Thursday night’s contest with a two run lead to protect.

Ryan Brasier was first up for the seventh inning, and he retired the only three hitters he faced in order. That was fine, but what happened in the eighth was not.

Bobby Poyner, who has seemingly been paving his way for a spot on any postseason roster with his performance as of late, made one mistake pitch to Lourdes Gurriel, who hit his eighth home run of the season to make it just a one-run game.

The left-hander did manage to record the first two outs of the frame along with that homer, and Joe Kelly was next up after him.

Kelly, who had already surrendered runs in two appearances this month alone, could not record the inning-ending out.

Instead, he loaded the bases on one walk, one single, and one HBP before allowing the tying run to cross the plate on another HBP.

Out of the 15 pitches Kelly threw on Thursday, only FIVE of them went for strikes.

Brandon Workman would have to enter this one with two outs and a Blue Jay on every base, but he was able to escape the jam by fanning Billy McKinney on three straight strikes.

After the Red Sox retook the lead at 4-3 in their half of the eighth inning, it was Craig Kimbrel’s time to shut the door on Toronto for the final time in 2018.

Making his second appearance in as many days, the flame throwing closer needed just eight pitches to retire the side in order, earning his 40th save of the season.

On the other side of things, the Red Sox lineup was matched up against Blue Jays right-hander Sam Gaviglio, who only allowed one run in 3.1 innings pitched in his last start against Boston on July 14th.

For the second consecutive night, the bats were not all there, but they really didn’t need to be thanks to a pair of home runs.

That first homer came in the bottom of the second, when JD Martinez took a swing at a 2-2 83 MPH slider on the outer half of the plate and sent it 397 feet into the Red Sox bullpen.

An inning later, a Jackie Bradley Jr. leadoff double would later result in the team’s second run of the night after Ian Kinsler drove him in on a one out sacrifice fly to left field.

Fast forward all the way to the sixth now, and Rafael Devers, who entered the game as a pinch runner for Eduardo Nunez in the fourth, absolutely crushed his 17th big fly of the season off of Mark Leiter.

According to Statcast, that ball was hit 394 feet and had an exit velocity of over 109 MPH.

In all honesty, that probably should have been the final nail in the coffin for the Blue Jays, but they pulled their way back into this thing, for a few minutes anyway.

Moments after Toronto evened this contest up at three runs a piece in the top half of the eighth inning, Xander Bogaerts responded right away by ripping a one out double off of Danny Barnes to put the go-ahead run in scoring position.

After a successful attempt of stealing third base, Bogaerts would come into score on what appeared to be a routine pop fly off the bat of Blake Swihart.

Instead, Jays second baseman Yangervis Solarte had trouble locating the ball during its descent, and it ended up clanking off his glove and dropping to the ground.

No RBI credited to Swihart there, but it was still good enough to get the job done.

For the second straight night, the game-wining run for Boston has been scored without recoding an RBI.

JD Martinez and Khris Davis of the Oakland Athletics are currently tied in the league lead for home runs with 41 a piece.

The Red Sox finish their season series against the Toronto Blue Jays with a 15-4 record. Their magic number to clinch the American League East is down to six games.

Eduardo Nunez is day-to-day with soreness in his right knee.

Winners of four straight, the Red Sox welcome the New York Mets into town for the first time since 2009 for a three-game weekend series.

Getting the start in the series opener for each side will be RHP Hector Velazquez for Boston and RHP Noah Syndergaard for New York.

In one career start against the Red Sox, which came back in 2015, Syndergaard surrendered four earned runs on six hits and one walk in 6.2 innings pitched. He did not factor into the decision.

Velazquez, on the other hand, has never faced the Mets in his career, but he does own a 4.26 ERA over seven appearances (one start) in interleague play this season.

UPDATE: Velazquez is out, RHP William Cuevas is in.

RHP Hector Velazquez will not start tonight’s game (9/14) against NYM due to illness. RHP William Cuevas will start in his place.

First pitch of the first game of the series is scheduled for 7:10 PM ET Friday.