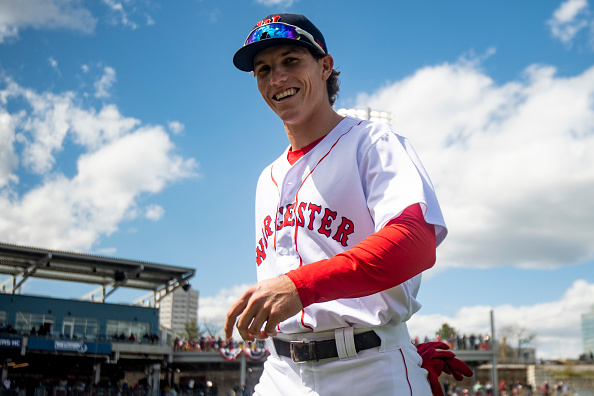 Former Angels manager Mike Scioscia managed the best player in baseball for eight years (2011-2018) in the form of Mike Trout.

Trout, a three-time American League MVP, eight-time All-Star, and eight-time Silver Slugger Award winner, is without a doubt the textbook definition of a five-tool player, and has been for quite some time.

So when Scioscia, who is currently managing Team USA ahead of an Olympic qualifying event in Florida, describes one of the top prospects in the Red Sox farm system as a five-tool player, that is saying something.

Who is that Red Sox prospect exactly? None other than outfielder Jarren Duran, of course.

As of now, Team USA’s roster — which also consists of a plethora of big-league veterans — is made up of 28 players, but will be whittled down to 26 by Sunday (May 30).

Since the training camp began earlier this week, Team USA has played a total of three exhibition games as of Friday. In those three games, Duran is the only player on the team who his hit a home run to this point.

“Looking at video ever since he was selected for our club, you just see the talent jump off the screen,” Scioscia recently told Baseball America’s Kyle Glaser. “Seeing him in person, his first step is incredible everywhere, whether he’s trying to steal a base or he’s in center field. He’s a five-tool player. When you call a guy a five-tool player you’re saying that he’s special. He’s in an elite group. I think that Jarren has that that skill set that can make him an impact player very quickly in the major-leagues.”

Duran, 24, is currently regarded by Baseball America as the No. 5 prospect in the Red Sox farm system, which ranks tops among outfielders in the organization.

After turning heads last summer at the alternate training site, over the winter in Puerto Rico, and in Fort Myers during spring training, the 6-foot-2, 202 pound left-handed hitter opened the 2021 minor-league season with Triple-A Worcester.

Prior to heading down to Florida to join Team USA, Duran was carrying with him a .278/.366/.625 slash line to go along with four doubles, seven home runs, 12 RBI, 14 runs scored, 10 walks, 21 strikeouts, and four stolen bases through 18 games played (82 plate appearances) for the WooSox.

Per Glaser, “USA Baseball identified Duran as a player it wanted last spring for the qualifier that was originally scheduled to take place in March 2020,” but the COVID-19 pandemic pushed everything back by a year.

Even with that delay, Team USA still took interest in Duran, as general manager Eric Campbell explained to Glaser.

“He makes you stop and watch,” Campbell said. “He’s a great player.”

The manager and general manager of Team USA are not the only ones who have been impressed with what they have seen from Duran, as longtime big-league third baseman has also been awestruck by the young outfielder.

“This kid Duran from the Red Sox has opened my eyes,” said Frazier. “I talk about work ethic with these kids. I mean, head and shoulders way above where I was at that age.”

Assuming both Duran and Casas — who was playing for Double-A Portland — make the 26-man roster, Team USA will open this upcoming qualifying tournament for the summer games against Nicaragua in Port St. Lucie on Monday.

Jeter Downs, Boston’s No. 2 prospect according to Baseball America, is also slated to play for his home country of Colombia in the same ‘ 2021 Baseball Americas Qualification Event.’

“It’s a good learning experience,” Red Sox manager Alex Cora said last weekend in regards to Casas and Duran playing for Team USA. “Obviously, to play for your country is an honor. It’s a great opportunity for them to learn from some guys who were very successful at this level. I hope for them that they can contribute and do the job.

“I think it’s a great experience,” added Cora. “Being around (Scioscia)… what an honor. He’s going to help them to be better. … This is part of, actually, player development. You’re going to be around some guys who have done it at the highest level of competition — one of the highest levels. It will be great for them.”