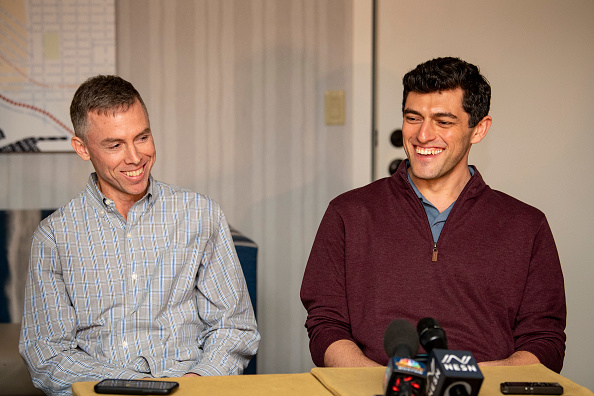 The 2020 Rule 5 Draft, which provides clubs without a full 40-man roster to add unprotected, non-40-man roster players from other clubs, is this coming Thursday.

The Red Sox, having traded left-hander Yoan Aybar to the Rockies and outrighted utilityman Yairo Munoz to Triple-A Pawtucket on Monday, have opened up two spots on their 40-man roster as the (virtual) Winter Meetings’ closing event draws ever closer.

Opening up those two spots, which brings Boston’s 40-man roster down to 38 players ahead of Thursday’s Rule 5 Draft, would seem to indicate that chief baseball officer Chaim Bloom and Co. are going to be busy the rest of the week.

Bloom’s general manager, Weymouth native Brian O’Halloran, was rather coy when asked about the possibility of the Sox targeting someone in the Rule 5 Draft.

“I would not rule that out,” he said when speaking with reporters via Zoom on Monday.

Right around this time last year, the Red Sox selected then-infield prospect Jonathan Aruaz from the Astros organization in the 2019 Rule 5 Draft. Arauz, 22, was able to remain on Boston’s active roster for the entirety of the 2020 season, meaning the club now has full control of him moving forward.

All things considered, it may have been easier for the Sox to keep Arauz on their major-league roster this past season considering how non-competitive they were. Given the team’s expectations for 2021, holding on to a Rule 5 player may be a tougher task for a club planning to contend for a World Series title.

“Generally speaking, it’s a little bit harder to carry a Rule 5 player when you have a team that’s built to compete for a championship and the postseason,” O’Halloran said. “It doesn’t mean that it’s impossible. Circumstances matter, certainly the player matters. Who the player is and whether he can compete and how you think he can hold his own in the big-leagues, what he brings to the table. But it definitely can be more of a challenge for sure.”

Again, in Bloom’s first offseason as chief baseball officer, the Red Sox did not hesitate to add a Rule 5 player. Doing so this year may be more of a challenge initially, but as O’Halloran said, that possibility cannot be ruled out. Especially when you consider the fact that Boston will have the fourth-highest priority, or fourth overall pick, in this year’s Rule 5 Draft since they finished with the fourth-worst record in baseball in 2020.

Regarding who the Red Sox could target in the upcoming Rule 5, there are two players I would like to highlight here, both of whom hail from Massachusetts.

The 25-year-old right-handed pitching prospect was originally drafted by Tampa Bay out of Clemson University in the 21st round of the 2017 amateur draft.

Regarded by MLB Pipeline as the Rays’ No. 24 prospect at the moment, Campbell most recently posted a 3.67 ERA and .238 batting average against over 27 outings (20 starts) and 144 2/3 innings of work between High-A Charlotte and Double-A Montgomery in 2019.

A graduate of Salisbury High School in Connecticut, Campbell worked almost exclusively as a long reliever in college, which would likely be his role on a major-league roster in 2021.

Per his MLB Pipeline scouting report, the 6-foot, 210 lb. righty’s pitch mix includes a 92-95 mph fastball with elite spin rate, an 89-90 mph cutter, a changeup, and a curveball.

Given the fact that he is still a member of the Rays organization, Campbell likely knows Bloom in some capacity, so there could be something there depending on the Sox’ level of interest.

Next, there’s West Roxbury native Packy Naughton, who was left off the Angels’ 40-man roster just months after being acquired from the Reds in exchange for outfielder Brian Goodwin.

Another pitcher, the 24-year-old left-handed pitching prospect was originally selected by Cincinnati in the ninth round of the 2017 amateur draft out of Virginia Tech.

Prior to getting dealt to the Halos, Naughton worked exclusively as a starter in 2019, posting a solid 3.32 ERA over 28 outings and 157 innings pitched between High-A Daytona and Double-A Chattanooga. He recorded 131 punchouts in those 157 frames of work.

An alumnus of Boston Latin School, the 6-foot-2, 195 lb. southpaw is currently regarded by MLB Pipeline as the Angels’ No. 12 prospect. Per his FanGraphs scouting report, Naughton, who has experience as a reliever in college, is “funky and deceptive, hides the ball well, creates tough angle in on righties’ hands, and then drops that changeup on them.”

His pitch mix — fastball, slider, changeup — may not be all that electric, but Naughton has shown the ability to record outs in crucial situations while also being quite athletic for a pitcher. At the major-league level, he could undertake “a multi-inning relief role a la Ryan Yarbrough.”

So, here we have just two candidates with local connections that the Red Sox could consider taking in Thursday’s Rule 5 Draft. There are other interesting unprotected prospects up for grabs as well, such as former first-round draft pick Riley Pint, but for the time being I simply wanted to highlight Campbell and Naughton.