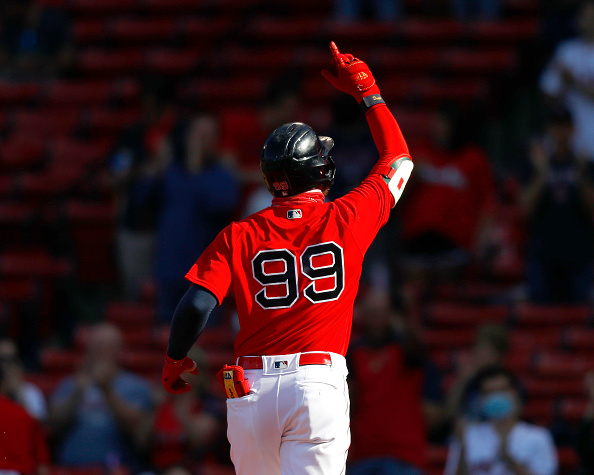 Alex Verdugo came into Saturday afternoon’s game against the Angels with a lot on his mind.

Not only was the young outfielder celebrating his 25th birthday with some family and friends in the stands at Fenway Park, but he was also riding one of the worst slumps of his Red Sox career to this point.

Heading into Saturday’s contest, Verdugo was just 2-for-his-last 24 (.083) at the plate over his previous six games dating back to May 9.

As someone who sets the bar exceptionally high for himself, this recent skid was surely weighing on Verdugo. But he was able to put his mind at ease in his first at-bat of the day on Saturday.

Matched up against Angels starter Dylan Bundy for the first time in his career, Verdugo took a 1-2, 85 mph changeup down the heart of the plate and crushed it 427 feet to right field for his fifth home run of the season.

The Red Sox went up 1-0 on the left-handed hitter’s solo shot and wound up routing the Halos by a final score of 9-0 to improve to 25-16 on the year.

“It was extremely nice, I won’t lie,” Verdugo said when asked about setting the tone with is bat on Saturday. “Obviously, the last week or so, I’ve been kind of pressing a little bit. So just to go up today, have simple thoughts, get down 0-2, and just kind of battle. Get a pitch over the zone, take it out of the park and give us an early lead just so we can breathe and let Martin (Perez) get into his rhythm and his groove.

“It was big. It was big, man. I can’t stress that enough,” he added. “It helped my shoulders, it helped me all relax, and just kind of have fun again.”

In the process of rounding the bases for the first time at Fenway since May 4, Verdugo pointed towards the Red Sox dugout while first beginning his trot, towards left field as he was rounding second base, and towards behind home plate after he had rounded third base.

The reasoning behind that? Well, since it was his 25th birthday, Verdugo had a select number of family and friends in attendance. His parents were seated up behind home plate — watching their son play at Fenway Park in-person for the first time since he was traded to the Red Sox last year — while his best friend and their family were seated up on the Green Monster.

“It was cool,” said Verdugo. “So if I hit the home run and I was pointing everywhere, that’s why. I was trying to make sure I got my mom, my dad, my best friend, and then also my best friend and his family in left.”

Verdugo followed up his first-inning home run by lacing a leadoff single in the fifth inning and coming in to score on Xander Bogaerts’ three-run home run as part of a 2-for-4 day at the plate.

Not only did Verdugo enjoy a successful day on an individual level, but he made his birthday that much better by playing a key role in the Sox’ blowout win over the Angels.

“Last thing we want to do is lose, especially on my birthday,” he said. “Just want to celebrate it even more, so the fact that we win, it’s already a positive. That’s the biggest thing: just a win. For me personally, in that first at-bat — going through a little skid — and have a good at-bat, get a pitch out over and drive it like that in front of my family that’s here and some friends, it was a very special moment for me. Very special.”

By notching his first multi-hit game since May 8, Verdugo credited his teammates and coaching staff for helping him stay on track with the power of positive affirmation while he was slumping.

“It’s a long year,” he admitted. “We all know. We go through ups and downs. Just to see that your guys — your teammates, your staff — they all care about you. They see that you’re going through something, but they want the best for you.”

As for why he was hitting just .226 in the month of May leading up to Saturday in the first place, Verdugo attributed that to “not staying back” on the ball while he was in the batter’s box.

“I wasn’t letting the ball travel,” said Verdugo. “And that’s the biggest thing for me. When I let the fastball travel and get deep on me, I can just use my hands, catch it deep and shoot it to left. And then it puts me in a better spot for the curveballs, the changeups, all the offspeed pitches.

“And I just felt like I was kind of in between,” he continued. “Whether I was trying to hit every pitch or I just wasn’t really locked in. It just felt like you were trying to force a result, and that’s the biggest thing I can say. You’ve got to go up there and win each pitch. Even if a pitcher gets a strike, that doesn’t mean you’re automatically swinging the next pitch. It’s just see the ball, let it get deep and good things will happen.”