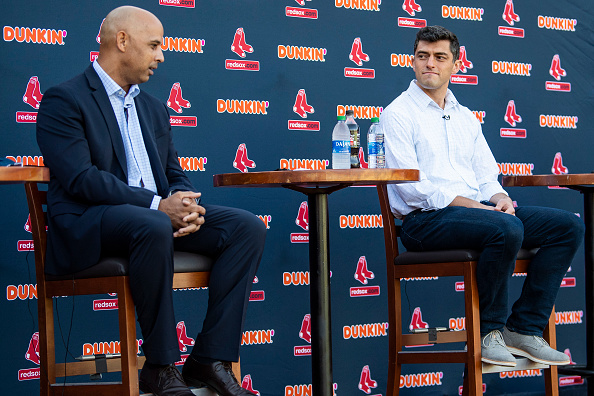 In two stints as manager of the Red Sox dating back to November 2017, Alex Cora has worked under two heads of baseball operations in Dave Dombrowski, who first hired him, and Chaim Bloom, who re-hired him.

With nearly three decades separating them in terms of age, it’s safe to say that Dombrowski — 64, formerly Boston’s president of baseball operations — and Bloom — 37, currently Boston’s chief baseball officer — operate using different approaches when it comes to building up a major-league roster.

Cora, having been in the game for quite a while himself in a variety of roles, has seen these differences in style between Dombrowski and Bloom up close and personal.

He said as much when speaking with NESN’s Tom Caron and Jerry Remy on the most recent installment of The TC & Jerry Podcast.

“I saw it at the end of 2019 at the winter meetings in San Diego,” Cora said. “Just talking to [Bloom] and the way he does his thing with the other teams is a lot different. I loved working with Dave. It was fun. I still remember my first meeting him at the winter meetings in Orlando (2017), and we had this board and there were certain names. There was actually two on top, it was J.D. [Martinez] and Mitch [Moreland], and we got them. It was like, ‘We’re getting these guys. We’re going to get them.’ It took a little while with J.D., but right away we got Mitch and then we got J.D.”

Moreland ultimately re-upped with Boston on a two-year, $13 million deal in December 2017, while Martinez waited until February 2018 to ink a five-year, $110 million contract with what was then his new club.

The pair of veterans went on to have All-Star seasons in 2018 in addition to playing crucial roles in the Red Sox’ historic World Series run that October.

Under Bloom, the Sox have yet to make a free-agent splash on par with what Martinez got three springs ago, though Moreland re-signed with Boston once more on a one-year pact last January.

What he’s creating is a deeper roster, a better minor-league system,” said the Sox skipper. “He does his homework and that’s great. I’m learning a lot from him from that end. You guys know me, I can be patient but at the same time, I like action. But, I understand where we’re at. I know what he’s doing.”

In the past week alone, Bloom and Co. have made significant additions to the Red Sox’ 2021 Opening Day roster, acquiring right-handed reliever Adam Ottavino from the Yankees while signing right-hander Garrett Richards and utilityman Enrique Hernandez to one and two-year major-league contracts, respectively.

Left-hander Martin Perez also reportedly agreed to a one-year deal that includes a club option for 2022 to return to Boston earlier this month.

“If you’re a Red Sox fan or you’re a fan of Chaim Bloom, or whatever, you look from afar, and you’re like, ‘Oh, you know what, this is kind of interesting what he’s doing now,'” said Cora. “A few weeks ago, it was like, ‘Oh, whatever. They’re too slow. They’re not doing it.’ But now, it’s intriguing what we’re doing. And I guarantee you guys that the puzzle is going to be a good one. I believe that and I trust Chaim and I’m looking forward to keep on working with him for a lot of years.”

Cora, 45, signed a two-year contract to return to his post as Red Sox manager back in November. The deal also includes a two-year club option for the 2023 and 2024 seasons, per a team release.

The Red Sox have hired Rays senior vice president Chaim Bloom to be their next head of baseball operations, according to the New York Post’s Joel Sherman.

Chaim Bloom to #RedSox as GM is finalized.

This news comes the day after it was reported that the Sox had interviewed Bloom for the position.

The 36-year-old Yale University product had been with Tampa Bay since 2005, initially serving as an intern for the club before working his way up to GM Erik Neander’s second-in command as vice president of baseball operations in November 2016.

At the time of former president of baseball operations Dave Dombrowski’s dismissal from the Red Sox, principal John Henry made it clear that he would prefer to get under the $208 million luxury threshold for the 2020 season.

In hiring Bloom to run their baseball operations department, the Philadelphia native will surely be tasked with doing just that, as he is coming over from an organization that put up impressive results the last two years (90 wins in 2018, 96 wins in 2019) despite operating on a minuscule payroll.

The specific details of Bloom’s appointment are not yet known, as the Red Sox themselves have yet to make anything official. But, this appears to be a move that is well regarded across the baseball world, so that is certainly positive to see.

ESPN’s Jeff Passan quotes one of Bloom’s former co-workers, who said, “For a guy as smart and accomplished as [Bloom] is, I think he gives everyone a feeling that he’s approachable and wants to engage.”

Once the Sox do make things official with an announcement or press release, make sure to stay tuned right here for more on that.

Red Sox GM search has been quiet, but seems to be coming to an end. @Ken_Rosenthal and I are reporting that Rays vice president of baseball ops Chaim Bloom is among those who interviewed for the job.

Bloom, 36, has been with Tampa Bay since 2005 and has been at his current position of senior VP of baseball operations since November 2016.

A native of Philadelphia and a graduate of Yale University, Bloom “‘works with (general manager) Erik Neander to oversee all functions within baseball operations,” per the Rays’ official website.

The Sox parted ways with former president of baseball operations Dave Dombrowski in early September, less than a full year after winning a franchise-record 119 games en route to a World Series title last October, and have since rolled with the quartet of  Eddie Romero, Zack Scott, Brian O’Halloran, and Raquel Ferriera to lead their baseball operations department in the interim. According to MassLive.com’s Chris Cotillo, all four are expected to remain within the organization even if an outside hire is made.

It’s pretty funny. As early as Thursday morning, it seemed as though there was no news to report regarding Boston’s search for a new general manager or head of baseball operations.

Now, an announcement could be made as soon as Friday if Bloom is the man for the job. We’ll have to wait and see on that, so make sure to stay tuned right here if something official goes down.

In the last few weeks following the firing of now ex-president of baseball operations Dave Dombrowski, rumors had been swirling that the Red Sox were interested in a potential reunion with former general manager and current Chicago Cubs president Theo Epstein.

Epstein himself shut down those reports on Wednesday, telling reporters before the Cubs took on the Pittsburgh Pirates that, “I’m here. We have a lot we need to work on to get back to the level we’re accustomed to. I’m invested in that. That’s what I’m focused on.”

The Brookline, Ma. native’s current contract with Chicago runs through the end of the 2021 season. He initially joined the Cubs back on October 21st, 2011, the same day he resigned from the post as GM of the Red Sox for a second time.

At just 45-years of age, Epstein has already established himself as one of the more accomplished baseball executives of the 21st century, snapping an 86-year World Series drought with the Sox in 2004, winning another in 2007, and snapping a 106-year drought with the Cubs in 2016.

As you may have already guessed, the Red Sox are going to need someone to lead their baseball operations department ahead of what looks to be a crucial winter for the club with plenty of important decisions to be made.

And with that bit of knowledge, Epstein also confirmed Wednesday that, “neither he, GM Jed Hoyer or executive Jason McLeod were linked to the Red Sox position,” per the Chicago Sun-Times’ Gordon Wittenmyer.

“I have really good relationships with a lot of people there,” Epstein said. “And I certainly wish them the best, but there’s nothing to that story.”

So, unless something dramatic happens relatively soon, it seems as though the Red Sox will have to look elsewhere for a new head of baseball operations. Perhaps Eddie Romero, an internal option, is a viable choice?