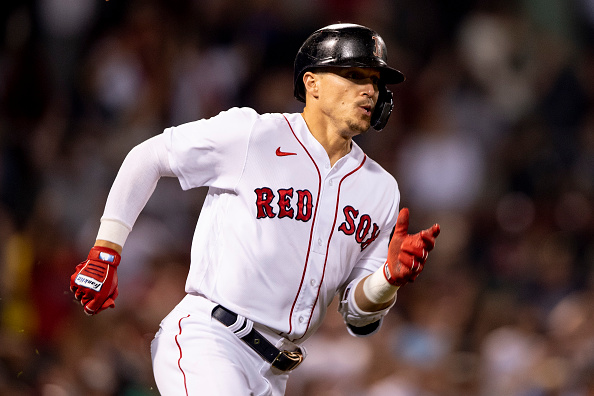 Red Sox utility man Kiké Hernández has been named the American League Player of the Week for the week of July 19-25, Major League Baseball announced Monday.

Hernández becomes the second member of the Red Sox to earn AL Player of the Week honors this season, joining J.D. Martinez — who did so in early April.

On the National League side of things, Dodgers utility man Chris Taylor — a former teammate of Hernández — was the recipient of Player of the Week honors after he posted an OPS of 1.433 in seven games against the Giants and Rockies.

In six games against the Blue Jays and Yankees this past week, Hernández went 10-for-25 (.400/.448/1.000) at the plate with four doubles, one triple, three home runs, nine RBI, and eight runs scored over 29 plate appearances while playing second base, shortstop, and center field.

The 29-year-old began his week with his first multi-homer game of the year in Buffalo, then came through in the clutch on more than one occasion at Fenway Park while the Yankees were in town.

On Thursday, with his side down to their final out and trailing 3-1 in the late stages of the ninth inning, Hernández laced a game-tying, two-run double off the Green Monster that scored both Alex Verdugo and Jarren Duran to knot things up at three runs a piece and set the Red Sox off for a walk-off 5-4 win in the 10th.

On Sunday, Hernández took center stage in the eighth inning of Boston’s dramatic come-from-behind victory over New York, as he ripped an RBI double off Yankees reliever Zack Britton that brought in Christian Vazquez to cut the Sox’ deficit down to one run and later scored what would turn out to be the winning run on a sacrifice fly off the bat of Xander Bogaerts.

Hernández, who signed a two-year, $14 million deal with Boston in February, has proven to be a valuable component of what the club is trying to accomplish in 2021 and beyond.

Coming into play on Monday, the right-handed hitter out of Puerto Rico ranks 20th among qualified American League position players in fWAR (2.4) while leading all AL center fielders in Defensive Runs Saved (12), per FanGraphs.

The fact that Hernández has been as solid as he has been at center field this season speaks to just how versatile he is, as he originally signed with the Sox to be the club’s everyday second baseman.

That being said, Hernández — who turns 30 in late August — will make just his second start and fifth overall appearance at shortstop in place of Xander Bogaerts in Monday’s series opener against the Blue Jays at Fenway Park. 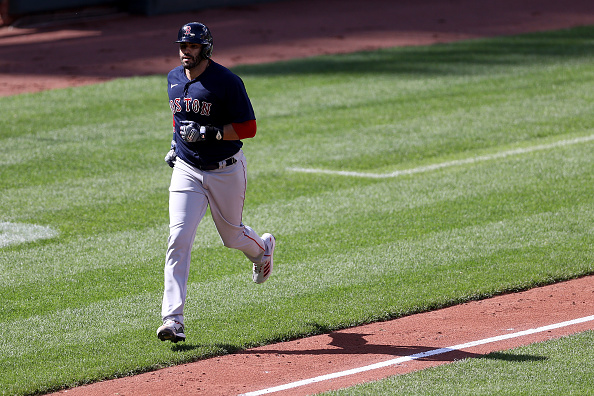 Over the course of five games against the Rays and Orioles this past week, Martinez slashed a sizzling .458/.500/1.125 with four home runs and 13 RBI.

The 33-year-old slugger missed one of his team’s six games as a result of being placed on the COVID-19 related injured list on Saturday, but that absence would wind up being very short.

Returning to Boston’s lineup for their series finale against Baltimore on Sunday, Martinez went 4-for-6 at the plate while clubbing three home runs, collecting four RBI, and scoring four times.

By capping off his weekend with that dominant performance at Camden Yards, the three-time All-Star became just the fifth player in major-league history to put together a three-homer game for three different teams (Tigers, Diamondbacks, Red Sox).

Taking this past weekend’s showing into consideration, Martinez now owns a slash line of .472/.500/1.083 to go along with five home runs and 16 RBI through his first eight games and 38 plate appearances of the young season.

“He’s locked in, you can tell,” Red Sox manager Alex Cora said of Martinez’s torrid start. “He is walking around talking hitting. This is a guy I saw in ‘18 and ‘19, he has an idea of what he wants to do. He doesn’t deviate from his process. I know he talked about last year and he’s on a mission to prove people wrong, but it was only 60 games. He was one month away from getting his numbers right. Right now, he’s locked in and I’m glad he’s swinging the bat the way he is.”

Despite the record-setting start in which he has recorded an extra-base hit in eight straight games, though, Martinez himself tries not to pay too much attention to it.

“Honestly, for me, I don’t even notice it. I really try not to,” he said on Sunday. “You guys know how I am. I repeat the same things over and over to you guys. I think the moment you’re aware of it, you’re no longer in it. So I try to not be aware of it and just focus on the small tasks. Focus on my game plan off certain pitchers and what I’m trying to do. That’s how I kind of control the whole thing.”

Martinez taking home American League Player of the Week honors marks the first time a member of the Red Sox has done so since Rafael Devers in August 2019.

On the National League side of things, Padres right-hander Joe Musgrove was the recipient of Player of the Week honors after throwing the first no-hitter in franchise history against the Rangers on Friday. 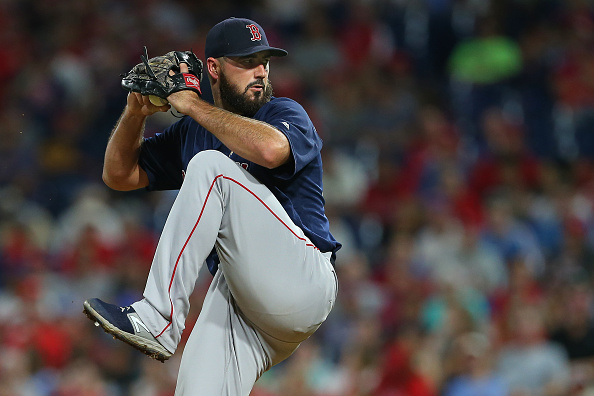 Red Sox right-hander Brandon Workman was named American League Reliever of the Month for the month of September on Monday afternoon.

Lights out to end the season.

From not even being on the World Series roster less than 12 full months ago to becoming one of, if not the most reliable reliever out of the Sox’ bullpen. 2019 was quite the year for Brandon Workman, and he will likely be rewarded with a sizable raise in his final season of arbitration because of it. 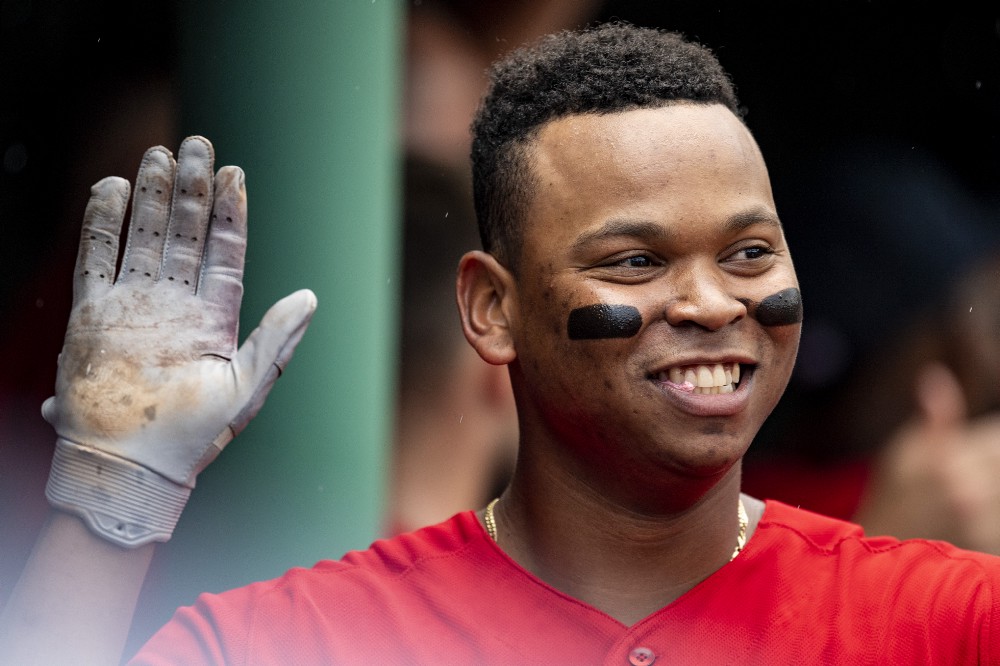 Red Sox third baseman Rafael Devers has been named American League Player of the Week for August 12th through the 18th.

Congrats to Raffy on being named the @WBMasonCo Player of the Week! 👏👏👏 pic.twitter.com/TUWoDkC4Mz

The 22-year-old put together quite the week at the plate against the Cleveland Indians and Baltimore Orioles, slashing .593/.633/1.185 with 10 extra-base hits, three of which being home runs, and 11 RBI over his last six games.

That stretch included a run of eight straight hits that began with a six-hit, four-double performance in Cleveland on Tuesday, marking the first time since at least 1908 that a major leaguer had achieved that feat, and extended into Wednesday.

Against the Orioles on Sunday, Devers became the first big leaguer this season to surpass the century mark in RBI with a two-run homer, his 27th, in the seventh inning of a 13-7 victory.

This is the part of the game where Raffy hits a home run. pic.twitter.com/aMsktPNLfc

2019 has certainly been a breakout year for Devers to say the least. In what is only his second full season in the majors, the breakout star appears to be a lock to finish in the top three for American League Most Valuable Player voting in the fall.