The Red Sox are playing their last spring training game of 2018 today, and ESPN just so happens to be televising it. In the third inning, they stuck a microphone on Mookie Betts and started interviewing him while he was patrolling right field. These have been happening throughout spring training because why not? The games don’t hold any meaning, might as well get something out of them that you really can’t get during the regular season. I believe this Bryce Harper interview during last year’s All-Star Game on FOX is what started this trend:

Now, ESPN is doing it and they got the best position player on the Red Sox to answer some questions. I wasn’t able to watch the whole thing, but I was able to catch the highlight of it.

Kris Bryant slaps a ball to right as Mookie Betts is answering a question, and what ensues is hilarious.

Double hit over Mookie Betts' head while he is being interviewed by ESPN — "I ain't getting this one, boys" — ESPN booth cracks up. pic.twitter.com/SXLhuaUfP9

I don’t know what it is, but hearing, “I ain’t getting this one, boys” as Mookie is chasing down a fly ball was funnier than I thought it would be. The moment may provide some insight into what goes through the heads of these athletes as they are chasing down a ball, or it could be Betts knowing he is on camera and making a joke. Either way, we got  a viral moment in the last spring training game of the year. I doubt Major League Baseball would allow these interviews to be conducted during meaningful games, but maybe we will see these occur more next spring training across the league. 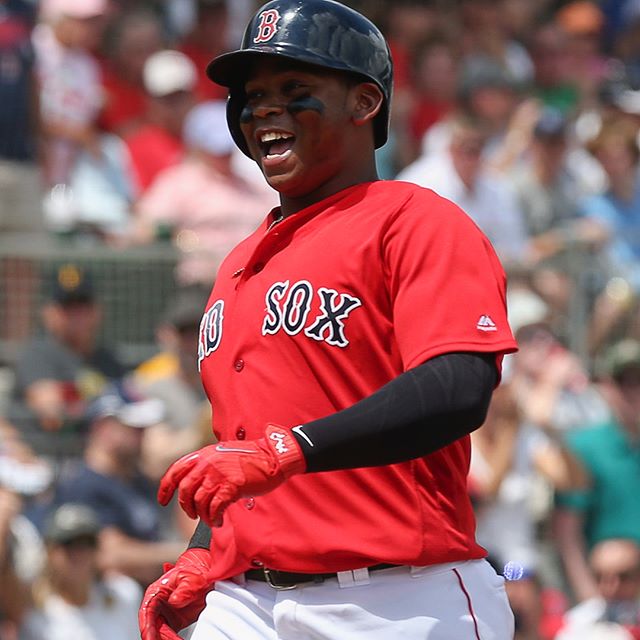 In the second inning of an exhibition game against the Chicago Cubs, Red Sox fans had to hold their breaths yet again as another key player appeared to injure himself. Chris Sale took a line drive off his left hip on Saturday, and now Rafael Devers suffered a right knee contusion on this play at the plate tonight.

What a crazy play. Rafael Devers scores from 3B on an overthrow back to Yu Darvish pic.twitter.com/Rf9ekUqltm

Everything about this play is pretty awkward. From Victor Caratini’s throw that went over the head of Yu Darvish, to how bad Addison Russell’s throw back to home plate was. As bad as it looked, it was agood sign to see Devers get back on his feet quickly and walk off the field under his own power. You hate to see this stuff happen, especially when the games hold no meaning. Evan Drellich is reporting that Devers is ‘day to day’, so hopefully with some rest he will be ready to go by Thursday. 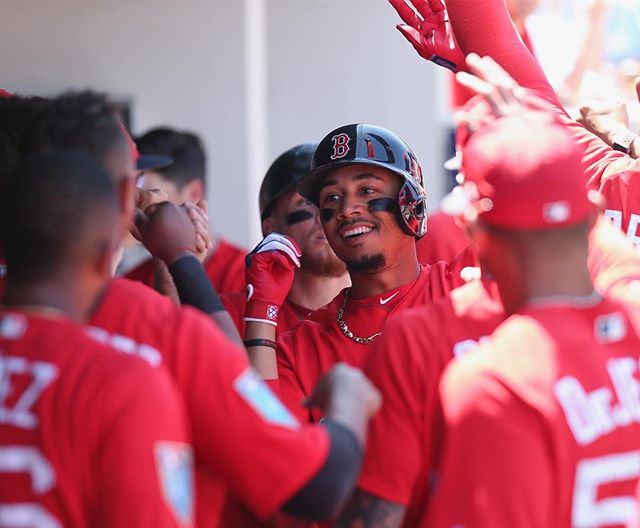 Although they are not done playing exhibition games, the Red Sox did move one step closer to playing meaningful baseball today, as they defeated the Minnesota Twins 6-1 in their last Grapefruit League game of the spring. They finish Grapefruit League play at 20-8-1.

Like Chris Sale did yesterday, David Price made his final start before the regular season begins today. The lefty tossed three innings of one run ball while facing 12 batters and fanning four of them. The only run he gave up came on a solo shot off the bat of Twins slugger Brian Dozier in the second inning. He’ll be on the mound again next Friday, facing off against the team he began his career with in the Tampa Bay Rays.

Bobby Poyner, Craig Kimbrel, Matt Barnes, and Dedgar Jiminez also got some work in today, and they all combined to throw six shutout innings while only allowing three total runners to reach base.

Offensively, the Red Sox were carried by the top half of the lineup. Mookie Betts, JD Martinez, Hanley Ramirez, and Andrew Benintendi were responsible for all six runs scored. The three home runs the team hit today belong to just Betts (2) and Benintendi. To put it simply, all three were hit far.

RIP to that ball. 🤭 pic.twitter.com/WTJxfRtrfz

As for what’s next, the Red Sox will be hosting the Chicago Cubs over the next two days at Fenway South. After that, it’s an off day, then we finally arrive at Opening Day in St. Pete on Thursday. It took a while, but we are just FOUR days away from meaningful baseball being back in our lives for the next seven months. I’ll make sure to have a season preview out soon.

The #RedSox today traded infielder Deven Marrero to the Arizona Diamondbacks in exchange for a player to be named later or cash considerations.

The Red Sox made an unsurprising move today. Out of Brock Holt, Blake Swihart, and Deven Marrero, there was a very small chance all three would make the Opening Day roster. After this trade, we now know that Holt and Swihart are essentially locks to make it. While Marrero goes to Arizona, the Red Sox receive either a PTBNL or cash considerations in return.

Since he was drafted by the Red Sox in the first round of the 2012 amateur draft, Marrero never put it all together. His defense is at a borderline elite level, but offensively, he brought almost nothing to the table. In 109 big league games, Marrero owns a career batting average of only .208 and a measly .259 On Base Percentage. Despite that, I have to give him credit for what he did for the Red Sox in 2017. The team went through Pablo Sandoval, Brock Holt, and Josh Rutledge at third, and it was a circus. Before Rafael Devers got called up, Marrero stepped up and provided some stability defensively at that position.

Maybe he’ll figure things out in Arizona, a place he is familiar with since he played college baseball for the Sun Devils of Arizona State University. There is also more familiarity with Diamondbacks leadership. The man who traded for him, Mike Hazen, was a part of the Red Sox front office when the team drafted him. And the manager of the Diamondbacks, Torey Lovullo, served as the Red Sox bench coach when Marrero was with the big league club for parts of the 2015 and 2016 seasons.

It’s nor clear what his role with the DBacks will be, but I would expect him to get the majority of his at bats against left-handed pitchers. That’s where he has found the most success at the plate in his big league career. I mean, his OPS increases by over 200 points when facing LHPs compared to facing RHPs. So best of luck in AZ, Deven. Maybe the Red Sox will see you again in October.

Also, this is my favorite Deven Marrero game.

Making his last start of the spring, Red Sox ace Chris Sale did not have the most ideal day. After facing only four batters, the lefty had to exit the game because of a line drive he took off his left hip.

It was a scary moment, but it appears that Sale is fine and will start on Opening Day as scheduled. While talking to reporters, Sale said, “It looked a lot worse than it actually is” and that he is “Not at all” concerned that he’ll miss his next start. He has a standard five days to prepare for it and he will toss a bullpen sometime in the next two days as well. The bottom line is that Sale and the Red Sox got lucky. That JD Davis line drive could have done some damage, but thankfully, it did not. The San Francisco Giants just lost their ace Madison Bumgarner to a broken hand yesterday, and even though he has only been here for one season, losing Sale would be as detrimental to the Red Sox as it was for the Giants losing MadBum. Opening Day cannot get here soon enough. 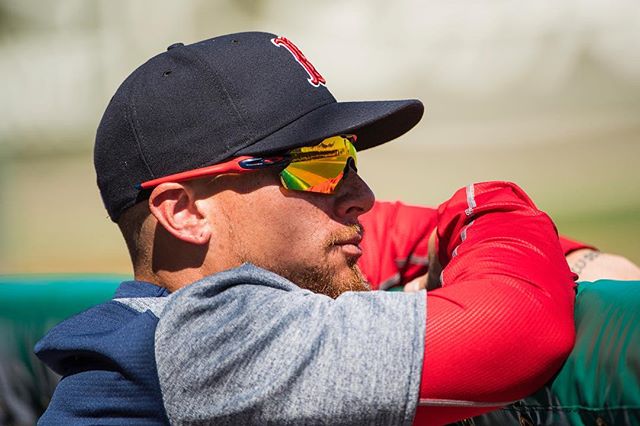 The #RedSox today signed catcher Christian Vázquez to a three-year contract extension through the 2021 season, with a club option for the 2022 season. pic.twitter.com/dDF6qAS3ZV

Entering his age 27 season and the last year on his previous contract, Red Sox catcher Christian Vazquez is here to stay for a while. The two sides came to terms on a three-year deal worth approximately $13.35 million over that span. He’ll still make $1.425 million in 2018, then the extension will kick in next season. The new contract also includes a club option worth $7 million in 2022, where Vazquez will be 31 years old.

The Puerto Rico native has been with the Red Sox since 2008, when he was drafted by the Red Sox in the ninth round in the amateur draft that year. In 211 career big league games, Vazquez owns a slash line of .261/.311/.355. He has always been known for his abilities behind the plate, but he really came through with the bat in his hands in 2017, putting up career high numbers in multiple offensive categories while also appearing in a career high 99 games. One of the more memorable moments of last season is because of Vazquez, when he walked it off for the Red Sox on August 1st against the Cleveland Indians.

With his new contract, Vazquez has committed to making annual donations to the Red Sox foundation. Great move on his part. Should be an exciting season for the number one catcher. 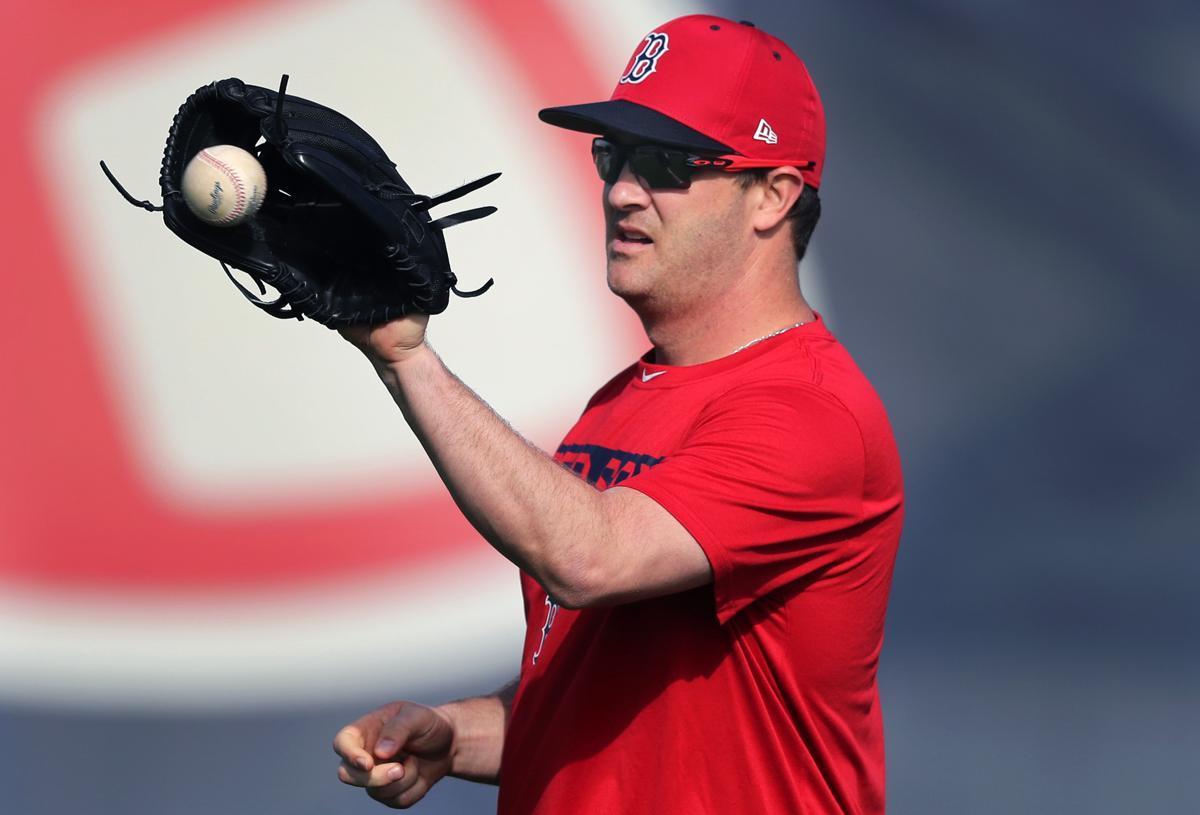 Well, this stinks. After getting arrested for domestic assault at his home in Tennessee back in December, Red Sox knuckleballer Steven Wright has at last received his punishment. If he starts the season on the active roster, he’ll have to sit out the first 15 games of the regular season. If he starts the season on the disabled list, he’ll have to wait until he is activated to serve the suspension. With that in mind, the end of the Red Sox rotation remains a bit of a mystery.

Chris Sale, David Price, and Rick Porcello. That’s what the front end of the Red Sox rotation right now. The last two, well, that could consist of any of these two pitchers, Drew Pomeranz, Eduardo Rodriguez, Brian Johnson, and Hector Velazquez. It looks like Pomeranz will actually start the season on the DL, thanks to the left forearm he strained at the beginning of the month seem more optimistic with him. Say he is ready, slot him in as the fourth starter. If he’s not, you are essentially down to Brian Johnson and Hector Velazquez as the best starting options. Speaking of options, Brian Johnson is out of them, so he should make the 25-man roster regardless. As for Velazquez, he is not having the best of spring trainings at this moment, but there really is no one better than him who is major league ready. So, if this is the rotation the Red Sox roll out for the first ten or so days of the season, how confident are you the bottom half can get the job done? Here it is one more time: