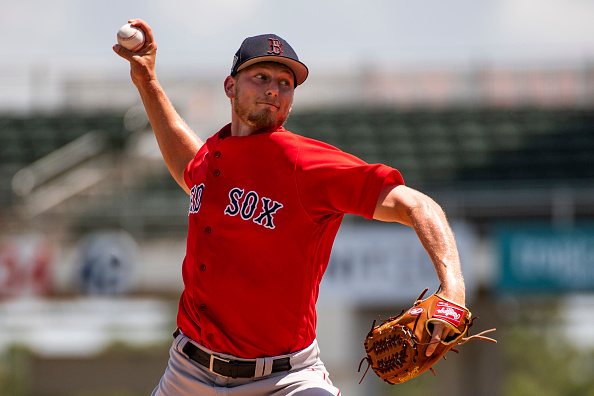 The Hanshin Tigers of Nippon Professional Baseball are expected to sign a pair of former Red Sox minor-leaguers in Brian Keller and Johan Mieses, according to Yahoo! Japan (and relayed by Yakyu Cosmopolitan on Twitter).

Keller, 28, was selected by the Red Sox in the minor-league phase of last December’s Rule 5 Draft. The right-hander was originally taken by the Yankees in the 39th round of the 2016 amateur draft out of the University of Wisconsin-Milwaukee. He spent the first six years of his career in the New York organization and made it as far as Triple-A Scranton/Wilkes-Barre before being scooped up by Boston a little more than 11 months ago.

After receiving an invite to major-league spring training, Keller broke camp with Triple-A Worcester in April. The 6-foot-3, 210-pound righty spent the entirety of the 2022 season with the WooSox and posted a 3.27 ERA and 3.76 FIP to go along with 126 strikeouts to 53 walks over 31 appearances (20 starts) spanning 113 innings of work.

Keller, who does not turn 29 until next June, operates with a five-pitch mix that consists of a 91-93 mph fastball that tops out at 95 mph, a low-70s curveball, a low-80s changeup, a cutter, and a slider. He became a minor-league free agent for the first time earlier this month. It is unclear if the Red Sox attempted to bring Keller back on another minors pact for 2023, but the native Wisconsinite will now try to make his mark overseas.

Mieses, on the other hand, first joined the Red Sox organization as a minor-league free agent in November 2019. The former Dodgers and Cardinals outfield prospect did not make his organizational debut until last May due to the COVID-19 pandemic, but he proved to be a solid power source over the last two years.

Mieses, who turned 27 in July, became a minor-league free agent like Keller five days after the World Series ended. Rather than explore other opportunities in affiliated ball, the burly slugger elected to take his talents to Japan, where he helped his native Dominican Republic win a bronze medal at the 2020 Summer Olympics.

In addition to Keller and Mieses, it also appears that Hanshin is interested in former Red Sox reliever Phillips Valdez. Valdez was claimed off waivers by the Mariners in July and was outrighted off Seattle’s 40-man roster in October. He, too, is a minor-league free agent.