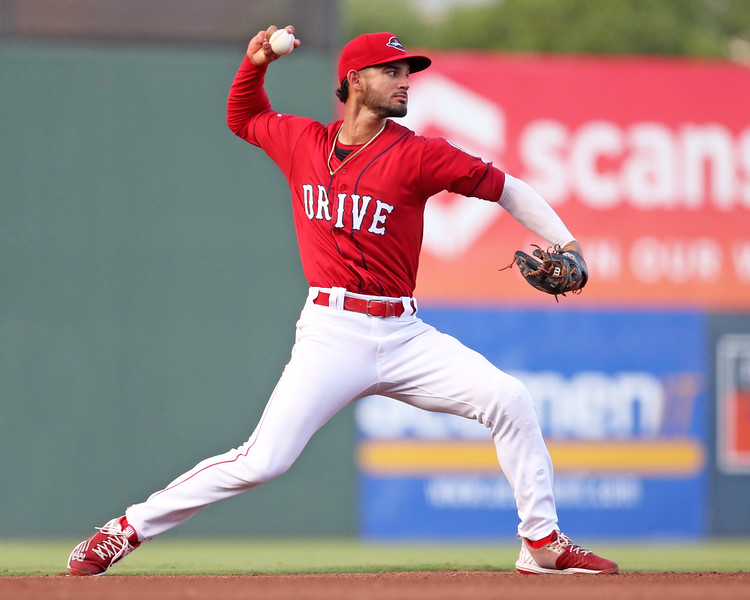 Lugo batted .353/.405/.608 with five doubles, seven home runs, 24 RBIs, 22 runs scored, nine stolen bases, eight walks, and 21 strikeouts over 25 games (111 plate appearances) for High-A Greenville in the month of August. Since the calendar flipped to September, the right-handed hitter has gone 4-for-11 (.364) in his last three games to extend his hitting streak to eight games.

Compared to last year with Low-A Salem, Lugo has been able to cut down on his strikeout rate (20 percent to 18.4 percent), but he is also drawing fewer walks (8.1 percent walk rate to 6.7 percent) and making solid contact less frequently (27.3 percent line-drive rate to 18.4 percent) in Greenville.

On the other side of the ball, Lugo has seen playing time at three different positions this season. The 6-foot-1, 187-pounder has logged 628 2/3 innings at shortstop, 180 1/3 innings at third base, and 58 innings at second base. While the versatility is nice, he has committed a total of 26 errors.

Lugo, 21, was originally selected by the Red Sox with the 69th overall pick in the 2019 amateur draft out of the Carlos Beltran Baseball Academy in Puerto Rico. The nephew of the former All-Star outfielder, Lugo signed for $1.1 million and is now regarded by Baseball America as the No. 13 prospect in Boston’s farm system.

Given that the minor-league season is almost over, it seems unlikely at this point that Lugo will receive a late promotion to Double-A Portland, though the Sea Dogs are scheduled to play six more regular season games after the Drive wrap things up on Sunday.

Regardless of that happens there, Lugo seems like a sure bet to break camp next spring with Portland. He may also be considered a candidate to play in the Arizona Fall League beginning next month even though he is not Rule 5-eligible until 2023.