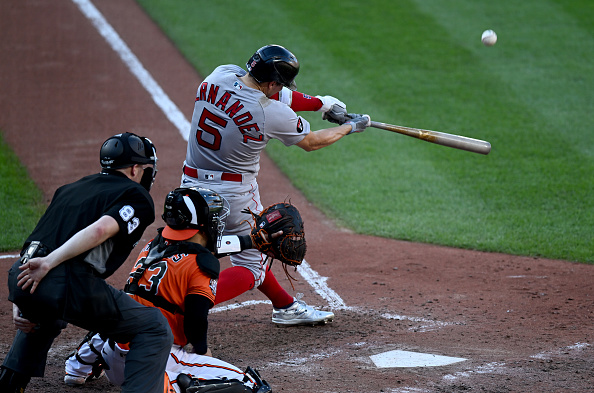 The Red Sox held on for a one-run over the Orioles at Camden Yards on Saturday afternoon. Boston defeated Baltimore by a final score of 4-3 to improve to 60-61 on the season.

Michael Wacha, making his 15th start of the season for the Sox, kept the O’s off the scoreboard while scattering four hits and one walk to go along with four strikeouts over 5 2/3 strong innings of work.

There were not too many dramatic moments to be had for Wacha, who retired 11 of the first 14 batters he faced leading into the top half of the fifth inning. To that point in the contest, the Boston bats had been held in check by Baltimore starter Kyle Bradish.

Kevin Plawecki reached base via a one-out single. Christian Arroyo followed with a base hit of his own to put runners on the corners for Alex Verdugo, who promptly roped another single to right field to drive in Plawecki.

An inning later, J.D. Martinez led off against Bradish with a sharply-hit single. After Bobby Dalbec struck out for the first out of the sixth, Enrique Hernandez came through by depositing a 373-foot two-run home run down the left field line.

Hernandez’s fifth home run of the season was the first from any Red Sox hitter since last Sunday. It also gave Boston a 3-0 lead. Wacha, meanwhile, continued to impress before giving up a one-out single to Austin Hays and issuing a two-out walk to Anthony Santander in the bottom of the sixth.

At that point, Red Sox manager Alex Cora opted to turn to his bullpen. John Schreiber came on in relief of Wacha and officially closed the book on the righty’s outing by stranding both of the runners he inherited with a three-pitch strikeout of Ryan Mountcastle.

Wacha finished with a final pitch count of 79 (52 strikes), inducing seven total swings-and-misses while mixing a four-seam fastball, changeup, cutter, sinker, and curveball. The 31-year-old hurler improved to 8-1 on the season and lowered his ERA to 2.28. He has yet to allow a run since returning from the injured list on August 14.

Schreiber came back out for the seventh and immediately surrendered a leadoff single to Ramon Urias. Jorge Mateo followed with another single to right field, but Jarren Duran made a poor throw back to the infield and missed the cutoff man, which allowed both runners to advance an additional 90 feet.

With runners at second and third for the Orioles now, the pinch-hitting Kyle Stowers plated Urias on a groundout to second base. Mateo then scored on a two-out wild pitch to trim Boston’s advantage down to one run at 3-2.

After Garrett Whitlock worked his way around a one-out single in a scoreless eighth inning, Duran was able to redeem himself in the ninth by reaching on a one-out bunt single off Bryan Baker. With the hit-and-run on, Duran went from first to third on a Plawecki single. He then scored from third on Arroyo’s third hit of the day — an 86.7 mph double to left field.

Arroyo’s RBI double would prove to be an important moment in this game. That being the case because Whitlock yielded a one-out triple to Mateo in the bottom of the ninth. Mateo scored on another Stowers groundout, but Whitlock held it down by getting Rougned Odor to line out to center field to end it.

Whitlock picked up his fifth save of the season while the Red Sox secured a 4-3 victory. Arroyo led the way offensively with three hits while Verdugo, Martinez, and Plawecki all enjoyed two-hit games.

Next up: 2022 Little League Classic on deck

The Red Sox and Orioles will wrap up this three-game weekend series in Williamsport, Pa. on Sunday night. In the fifth annual MLB Little League Classic, right-hander Nick Pivetta will get the start for Boston while fellow righty Dean Kremer will do the same for Baltimore.