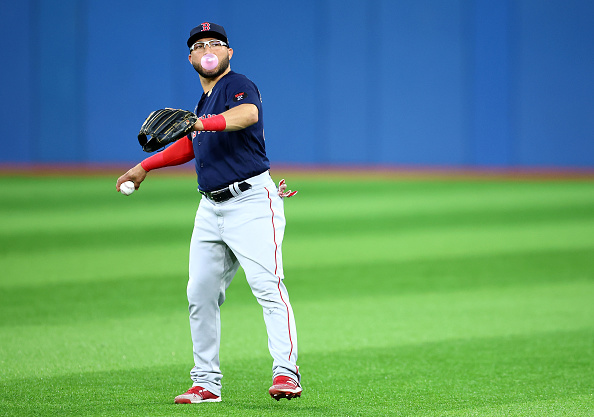 Before opening a three-game weekend series against the Blue Jays at Fenway Park on Friday night, the Red Sox made a series of roster moves.

First off, left-hander Chris Sale was placed on the 15-day injured list with a left fifth finger fracture, retroactive to July 19. To take Sale’s place on the active roster, right-hander Brayan Bello was recalled from Triple-A Worcester.

Additionally, catcher Connor Wong was optioned to Worcester on Thursday. To take Wong’s place on the active roster, veteran infielder Yolmer Sanchez was selected to the 40-man roster from Worcester.

Sale, in the first inning of his second start of the season against the Yankees on Sunday, was struck in the hand by a 106.7 mph line drive off the bat of Aaron Hicks. The 33-year-old southpaw was immediately removed from the game and was later diagnosed with a broken left pinky. He underwent surgery — or an open reduction and internal fixation of a left fifth finger proximal phalanx fracture — in Wellesley, Mass. on Monday. The Red Sox are optimistic that he will pitch again this season.

Bello, meanwhile, is up with the Sox for the second time this season. The 23-year-old prospect made two starts against the Rays (one at home, one on the road) earlier this month and allowed a total of nine runs on 13 hits, six walks, and seven strikeouts over eight combined innings of work. He is expected to start Sunday’s series finale against Toronto.

On the position player side of things, Wong was optioned back down to Worcester so that the Red Sox could add another infielder (Sanchez) to their roster in place of the injured Trevor Story.

Wong took the place of Story on the major-league roster when the second baseman was placed on the 10-day injured list on Saturday. He appeared in two games during last weekend’s series in the Bronx and went 1-for-1 with a single.

Sanchez, meanwhile, made a brief cameo for Boston as a COVID-19 substitute back in June. Filling in for the then-unvaccinated Jarren Duran in Toronto on June 28, Sanchez went 0-for-1 with a walk and sacrifice bunt.

With the WooSox this season, the switch-hitting 30-year-old has batted .247/.378/.413 with 12 doubles, one triple, nine home runs, 33 RBIs, 43 runs scored, six stolen bases, 50 walks, and 67 strikeouts over 78 games (303 plate appearances) while seeing playing time at every infield position besides first base.

The Red Sox did not not need to create an opening on their 40-man roster for Sanchez since rookie right-hander Josh Winckowski is currently on the COVID-19 related injured list. Boston’s 40-man roster is now at full capacity.