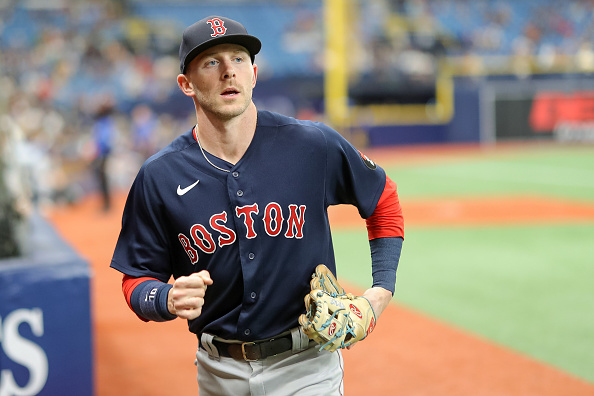 Both Story and Strahm were forced to leave Tuesday’s 3-2 loss to the Rays early due to injury. In the top of the fifth inning, Story was struck in the right hand by an 89 mph sinker from Corey Kluber as he attempted to swing at the pitch.

Rather than make contact with the bat, though, the ball hit the top of Story’s right hand. The 29-year-old was in visible pain as he walked down the third base line and received a visit from Red Sox manager Alex Cora and a team trainer. A few minutes later, Story came out of the game and was pinch-hit for/replaced at second base by Jeter Downs.

In the bottom of the sixth inning, Strahm was struck by a 98 mph line drive off the bat of Taylor Walls. The comebacker deflected off Strahm, who threw the ball away as he attempted to get Walls out at first base before keeling over in pain. Like Story, Strahm was visited by Cora and a team trainer before exiting the game and being relieved by Kaleb Ort.

According to Cotillo, it is unclear at this point if Story and/or Strahm will require a trip to the injured list. The Red Sox are waiting to see how both players feel upon arriving at Tropicana Field on Wednesday before making any IL-related decisions.

The Red Sox, as noted by Cotillo, already have 11 players on the injured list. And although right-handers Garrett Whitlock and Nathan Eovaldi are expected to be activated this weekend, losing Story and Strahm would be a blow to a team that has struggled so far in the month of July.