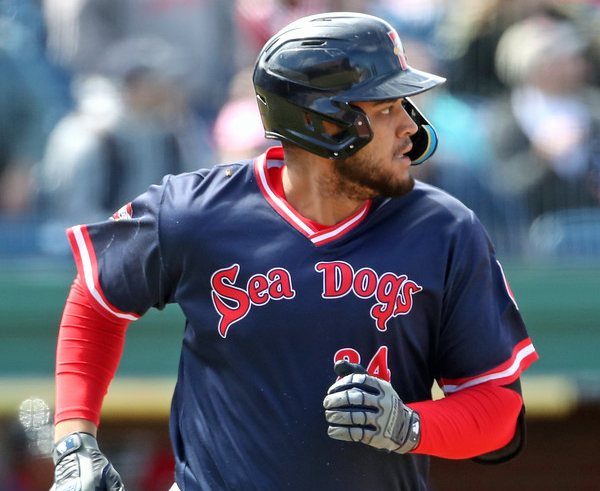 After a rough start to the 2022 season with Double-A Portland, Red Sox prospect Pedro Castellanos has turned a corner offensively during the month of May.

In Portland’s 4-2 win over the Harrisburg Senators at Hadlock Field on Sunday, Castellanos went 2-for-4 with two run-scoring hits and a strikeout out of the cleanup spot. The two-hit showing extended his hitting streak to 13 consecutive games.

Dating back to the third of May, Castellanos has slashed a stout .323/.338/.597 with five doubles, four home runs, 21 RBIs, six runs scored, two walks, and 15 strikeouts over his last 16 games and 65 trips to the plate. This comes after the left-handed hitter posted a dismal .388 OPS across 18 games in April.

If there is one thing Castellanos could be doing more of at the plate, it would be taking ball four. The 24-year-old has walked in just 3.5% of his plate appearances this season, which is among the worst marks in the Eastern League and the primary reason why his on-base percentage has remained relatively low despite the recent hot streak.

Defensively, Castellanos has seen the majority of his playing time with the Sea Dogs this year come at first base, though he has played both corner outfield positions as well. The 6-foot-3, 224 pounder may have a limited defensive profile, but has thus far only committed two errors over 222 innings between his three positions in 2022.

Originally signed by the Red Sox for just $5,000 as an international free agent coming out of Venezuela in July 2015, Castellanos came into the season ranked by SoxProspects.com as the No. 57 prospect in Boston’s farm system.

Castellanos is repeating Double-A this year, meaning he could be in line for a promotion to Triple-A Worcester before long. With that being said, Castellanos — who turns 25 in December — is in line to become a minor-league free-agent this winter, so getting the opportunity to play at the next level could prove beneficial for him in regards to his future.

In the meantime, Castellanos will look to extend his hitting streak to 14 straight games when the Sea Dogs open a six-game series against the Somerset Patriots in Portland on Tuesday morning.