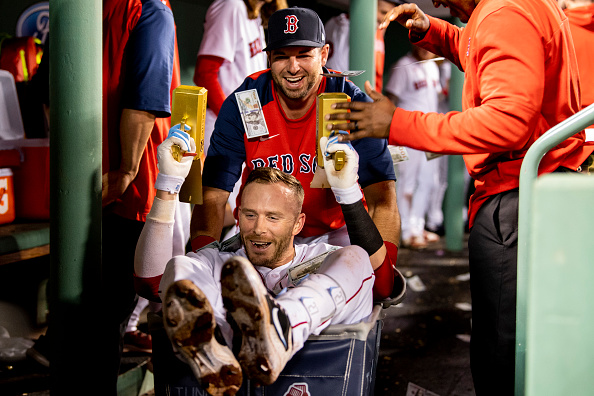 Right before the clock struck midnight on Monday, the Red Sox put the finishing touches on a series-opening win over the Astros at Fenway Park. It took nearly five hours to do so because of the weather, but Boston defeated Houston by a final score of 6-3 to improve to 14-21 on the season.

Matched up against veteran starter Jake Odorizzi to begin things on Monday, the Sox did not register their first hit of the night until the fourth inning, when Enrique Hernandez led off with a line-drive single. J.D. Martinez extended his hitting streak to 17 straight games and advanced Hernandez up to second base before Xander Bogaerts drew a five-pitch walk to fill the bases with one out.

Alex Verdugo followed by lifting a 235-foot fly ball to center field that was just out of the reach of sprawling Chas McCormick and brought in Hernandez from third to give the Red Sox an early 1-0 lead. Martinez was thrown out at third on the play and Trevor Story popped out to end the inning.

To that point in the contest, Garrett Whitlock had gotten through his fifth start of the season without yet giving up a run. The right-hander’s fortunes changed in the fifth, though, as he served up a solo homer to McCormick that pulled the Astros back even with the Sox at 1-1.

Shortly after that happened, Franchy Cordero led off the latter half of the fifth by showing off his power and speed on a 104.3 mph double off the Green Monster. Cordero then moved up to third on a Jackie Bradley Jr. groundout and scored on a pitch that got past Astros catcher Jason Castro.

Odorizzi was able to limit the damage to one run in the fifth, but in the process of getting Hernandez to ground out to first for the final out, suffered a serious injury while running off the mound. He fell to the ground and was ultimately taken off the field. The Astros described Odorizzi’s injury as lower left leg discomfort.

Whitlock came back out in the sixth but immediately gave up a leadoff ground-rule double to Michael Brantley that was followed by a four-pitch walk of Alex Bregman. He was then given the hook by Red Sox manager Alex Cora in favor of Jake Diekman, who walked the first batter he faced before yielding a game-tying sacrifice fly to Yuli Gurriel.

John Schreiber was called upon to finish the inning, and he officially closed the book on Whitlock’s outing by striking out McCormick on eight pitches to keep the 2-2 stalemate intact.

Finishing with a final pitch count of 80 (52 strikes) Whitlock wound up allowing a total of two earned run on three hits, two walks, and one hit batsman to go along with three strikeouts over five-plus innings of work. The 25-year-old’s ERA on the season now sits at 2.43.

As soon as Schreiber recorded the final out of the sixth, the skies above Fenway began to open and the rain started to pour. A rain delay that lasted 98 minutes started and the game did not resume until approximately 10:45 p.m.

Matt Barnes was dispatched for the seventh inning and only saw his struggles continue by giving up a leadoff double to Castro. A sacrifice bunt allowed Castro to advance to third and Jose Altuve drove him in by ripping an RBI single back up the middle. Barnes faced just three batters and was replaced by Matt Strahm, who proved to be far more effective. The left-hander worked his way around a hit batsman by striking out two in the seventh, then worked his way around a two-out double in an otherwise clean eighth inning.

Moments before the eighth inning began, though, Trevor Story came through in the clutch to lead off the bottom of the seventh. Matched up against Astros reliever Phil Maton, Story crushed a solo home run 428 feet over the Green Monster.

Story’s first Fenway Park homer as a member of the Red Sox had an exit velocity of 106.7 mph. It also knotted things back up at three runs a piece. This tie, however, did not last too long.

On the heels of what Strahm did in the top of the eighth, Hernandez led off the bottom half against Hector Neris with a double to left field that was deflected by Bregman. Martinez plated him with the go-ahead double while also putting a runner in scoring position with one out for Bogaerts.

As the fans who remained at Fenway started a “Re-sign Xander!” chant, Bogaerts heard them and delivered with a clutch, two-run blast over the Monster to give Boston a commanding 6-3 advantage. Bogaerts’ third big fly of the year left the shortstop’s bat at 103.7 mph and traveled 397 feet.

With a three-run lead to protect now, Hansel Robles got the call for the ninth inning. He yielded a leadoff single to Mauricio Dubon, but negated it by getting Altuve to ground into a 6-4-3 double play. Robles then got Brantley to fly out to left to slam the door on the Astros and pick up his second save of the year.

Next up: Urquidy vs. Eovaldi

The Red Sox will send right-hander Nathan Eovaldi to the mound as they go for a series victory on Tuesday night. The Astros will counter with fellow righty Jose Urquidy.

First pitch from Fenway Park is scheduled for 7:10 p.m. eastern time on NESN and TBS.