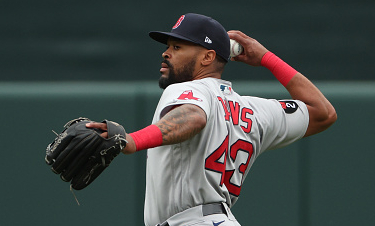 The decision to option both Davis and Valdez comes one day before all Major League Baseball teams are required to trim their active rosters from 28 to 26 players.

As a result of the lockout and the compressed spring training that followed, MLB allowed its clubs to carry 28 players on their rosters from the start of the season up until May 2. Teams must remove two players from their active roster in order to get down to 26 by Monday. They are now permitted to carry up to 14 pitchers through May 30.

By sending Davis and Valdez to Worcester, Boston now has 14 pitchers and 12 position players on its major-league roster. According to MassLive.com’s Chris Cotillo, the Sox are expected to keep it that way for the time being.

Davis, 27, was claimed off waivers from the Giants on Thursday and joined the team in Baltimore the following day. He was used as a pinch-runner in his Red Sox debut and went 2-for-4 with a pair of singles in his first start for the club on Sunday.

Since he has one minor-league option remaining, Davis can provide the Red Sox with experienced outfield depth from Worcester throughout the season. Before being claimed, the right-handed hitter appeared in 10 games for the Giants’ Triple-A affiliate in Sacramento and batted .295/.340/.500 with two home runs and seven RBIs over 47 plate appearances. He turns 28 in July.

Valdez, on the other hand, entered Sunday with a 3.24 ERA through his first seven relief appearances (8 1/3 innings pitched) of the season. On Sunday, however, the 30-year-old righty got rocked for four earned runs on four hits, two walks, and one hit batsman in two innings of work against the Orioles. That performance raised his ERA on the season up to 6.10.

As was the case last season, Valdez will join the WooSox’ bullpen for now but should contribute at the big-league level for Boston once more later in the year.