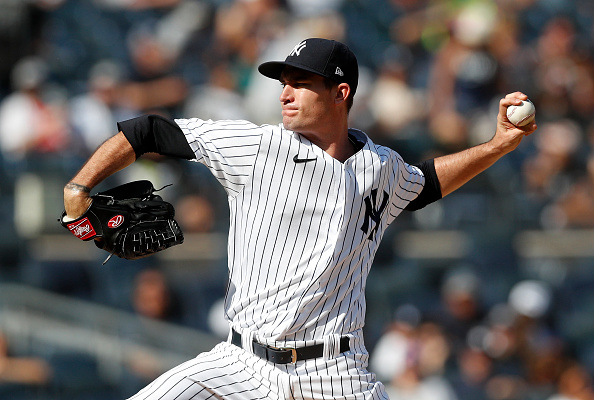 Before Andrew Heaney signed a one-year, $8.5 million deal with the Dodgers last Wednesday, the Red Sox were reportedly among the many teams interested in the then-free agent left-hander.

According to The Boston Globe’s Alex Speier, the Sox initially made Heaney an offer that would include one guaranteed year and a team option that would add on a second, which is similar to the deals the club signed Garrett Richards and Martin Perez to last winter.

That said, Speier noted that Boston was willing to up the ante by making a straight one-year offer to Heaney “that was competitive with” what the Dodgers were offering him, but the 30-year-old ultimately chose to sign with Los Angeles.

A former first-round draft pick of the Marlins in 2012 out of Oklahoma State University, Heaney was traded to the Dodgers along with Austin Barnes, Chris Hatcher, and current Red Sox utility man Enrique Hernandez in December 2014.

The Dodgers then flipped Heaney to the Angels for Howie Kendrick, and the lefty spent the next six-plus seasons with the Halos before being dealt to the Yankees over the summer.

While splitting the 2021 campaign between the Angels and Yankees, Heaney struggled for the most part, posting a 5.83 ERA and 4.85 FIP to go along with 150 strikeouts to 41 walks over 30 appearances (23 starts) spanning 129 2/3 total innings of work with both clubs.

Upon arriving in the Bronx in late July, the 6-foot-2, 200 pound southpaw was originally a member of the Yankees’ starting rotation, but was demoted to the bullpen towards the end of August.

As a reliever, Heaney did not fare much better by putting up a 10.24 ERA and 7.10 FIP across seven outings and 9 2/3 innings pitched before being designated for assignment in early October and being made a free agent as a result.

For as ugly as a season Heaney had as far as ERA and FIP goes, Speier notes that his struggles “were little deterrent to teams drawn to his swing-and-miss stuff.”

Put another way, teams such as the Red Sox were intrigued by Heaney — who works with a four-seam fastball, curveball, and changeup — for reasons that go beyond the box score.

Because of his eye-opening peripherals, Heaney is viewed by some evaluators as someone who can bounce back in 2022 the same way fellow left-hander Robbie Ray did on his way to winning the American League Cy Young Award with the Blue Jays in 2021.

The Red Sox, as Speier highlights, are “trying to shore up” their starting rotation in the wake of Eduardo Rodriguez signing a five-year contract with the Tigers last week.

It may have been an unconventional way of going about addressing a need, but it would seem that chief baseball officer Chaim Bloom and Co. were looking to maximize Heaney’s potential were he to choose the Red Sox over the Dodgers.

Heaney, who does not turn 31 until next June and is represented by Icon Sports Management, instead opted to join the Dodgers as he will surely be striving to reestablish his value in 2022 and test the free agency waters again next winter.