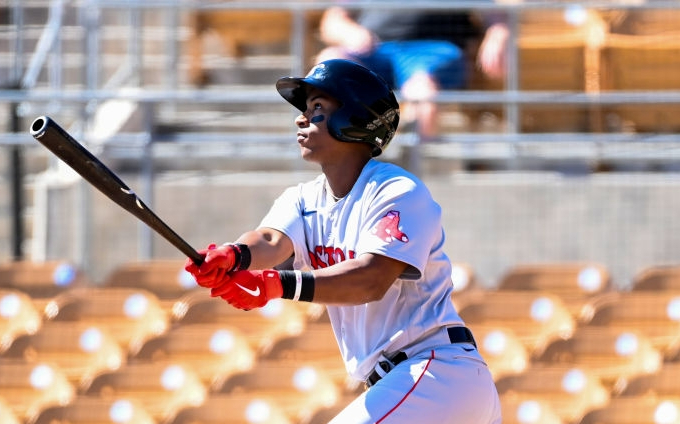 Red Sox top prospect Jeter Downs may only be a few weeks removed from an overall tough season with Triple-A Worcester this year, but the young middle infielder has certainly gotten off to a hot start in the Arizona Fall League.

Playing for the Scottsdale Scorpions alongside other Red Sox, Indians, Twins, Giants, and Rays prospects, Downs went 2-for-4 with a home run, an RBI, two runs scored, one walk, and one strikeout as part of an 11-9 loss to the Mesa Solar Sox at Scottsdale Stadium on Wednesday afternoon.

Batting out of the two-hole behind Rays prospect Matt Dyer and ahead of Twins prospect Matt Wallner, Downs began his day by crushing a solo shot off Marlins prospect Evan Fitterer with one out in the bottom of the first inning, marking the third straight game in which he has homered.

The 23-year-old, who was playing shortstop on Wednesday (and can also play second base), later drew an eight-pitch walk with no outs in the third inning, struck out on four pitches in the fifth inning, flew out to center field for the final out of the seventh inning, and led off the ninth inning with a single before scoring on a passed ball to wrap up what was a productive afternoon at the plate and on the base paths.

Since the 2021 Arizona Fall League season began on October 13, Downs has appeared in four games for the Scorpions and — following Wednesday’s strong performance — is currently slashing .357/.550/1.000 with three home runs, six RBI, five runs scored, one stolen base, six walks, and three strikeouts over 20 trips to the plate.

One of three players (two prospects) the Red Sox acquired from the Dodgers in the infamous trade that sent Mookie Betts and David Price to Los Angeles last February, Downs finally got his first taste of Triple-A action this year after the 2020 minor-league season was cancelled due to the COVID-19 pandemic.

On the hole, the 2021 campaign was not a particularly encouraging one for Downs. While he was selected to play in the All-Star Futures Game in Denver over the summer, the right-handed hitter overall struggled to the tune of a .190/.272/.333 (62 wRC+) across 99 games and 405 plate appearances with the WooSox.

That being said, Downs was at least able to salvage his season towards the end, and it came right around the same time fellow top Sox Prospect and Miami-area native Triston Casas earned a promotion to Worcester in late September.

From Sept. 17 until the Triple-A season came to a close on October 3, Downs hit an impressive .355/.400/.581 (158 wRC+) with one double, two homers, seven RBI, three runs scored, one stolen base, two walks, and eight strikeouts over his final nine games (35 plate appearances) of the year. Casas was promoted from Double-A Portland right in the middle of that stretch on Sept. 22.

Downs, who does not turn 24 until next July, is currently regarded by Baseball America as the No. 4 prospect in Boston’s farm system, which ranks three spots behind Casas, who is also playing for the Scorpions with five other Red Sox prospects in left-hander Brendan Cellucci, right-handers Andrew Politi, Connor Seabold, and Josh Winckowski, catcher Kole Cottam, and infielder Christian Koss.

Connor Wong is also listed on Scottsdale’s roster, but the catching prospect is currently with the Red Sox as part of their taxi squad for their American League Championship Series clash with the Astros.

Going back to Downs, the 5-foot-11, 193 pounder out of Colombia can become eligible for the Rule 5 Draft for the first time in his professional career this winter if he is not added to Boston’s 40-man roster by the November 2020 deadline.

When speaking with The Athletic’s Zach Buchanan recently, Red Sox director of player development Brian Abraham relayed that Downs wanted to play in the Arizona this fall even after a long and full season with Worcester.

Abraham also indicated that the Sox view Downs “as an up-the-middle, impact player” who is capable of driving the baseball while playing sound defense and running the bases.

“He’s an all-around player,” Abraham said, “and that’s really exciting for us.”