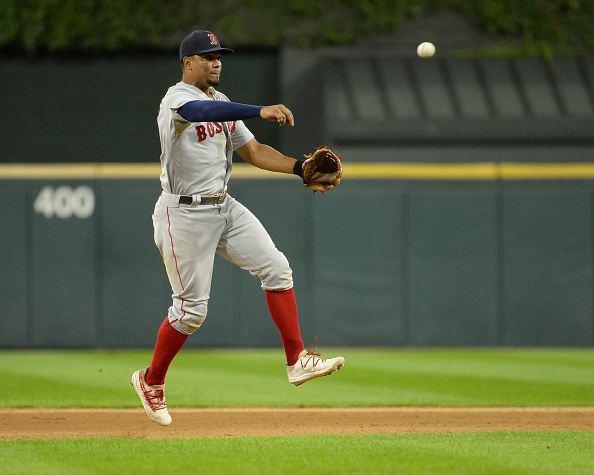 The Red Sox will once again be without J.D. Martinez as they go for a series win over the White Sox at Guaranteed Rate Field on Sunday afternoon.

Martinez, who has been dealing with back tightness throughout the weekend, had been scratched from Boston’s lineup each of the last two days before the same thing essentially happened on Sunday.

As was the case on Friday and Saturday, the veteran slugger went through batting practice earlier Sunday morning before being ruled out for the rubber match of this three-game weekend set.

Following Saturday night’s thrilling 9-8 win over the White Sox, Red Sox manager Alex Cora expressed optimism that Martinez would be back at full strength ahead of Monday’s series opener against the Mariners in Seattle, telling reporters (including MassLive.com’s Chris Cotillo) that he rather lose the 34-year-old for three days as opposed to a whole week.

With Martinez out of the lineup, Travis Shaw — the hero of Saturday’s comeback win — will get the start at designated hitter while batting out of the seven-hole.

In addition to being without Martinez, the Sox will also be without shortstop Xander Bogaerts, who will be getting his first day off since returning from the COVID-19 related injured list on Friday.

Here is how the rest of the Red Sox will be lining up behind right-hander Nick Pivetta, who was just activated from the COVID-19 related injured list, as they go up against White Sox righty Lance Lynn to close out the weekend.

First pitch Sunday is scheduled for 2:10 p.m. eastern time on NESN and TBS.