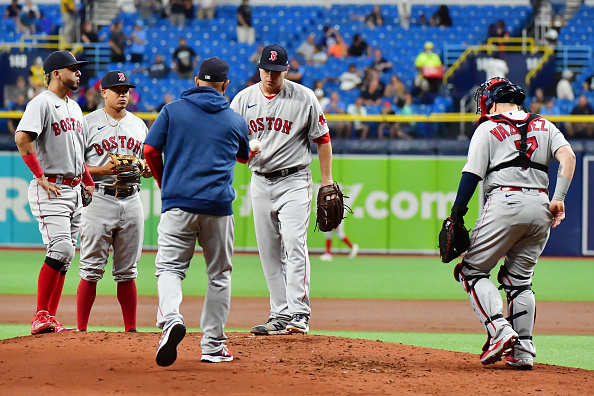 The road trip from hell rolled on for the Red Sox at Tropicana Field on Tuesday night.

In addition to having two more players — Hirokazu Sawamura and Xander Bogaerts — testing positive for COVID-19, the Sox committed two errors and fell to the Rays by a final score of 8-5, marking their third consecutive loss.

Matched up against Rays starter Ryan Yarbrough to begin things on Tuesday, Bogaerts actually got the Red Sox on the board first, as he followed up a two-out double from J.D. Martinez by ripping an RBI single to right field to give his side an early 1-0 lead.

Bogaerts was, however, removed from this contest in the middle of the second inning after his latest test came back positive, and it all started to go downhill for Boston from there.

That being the case because Brad Peacock, who was just acquired from the Indians on Mondy, got somewhat roughed up for five runs — all of which were earned — on two hits, two walks, one hit batsman, and zero strikeouts over 2 1/3 innings of work in his first start with the Red Sox.

After needing just seven pitches to get through a scoreless bottom of the first, Peacock served up a solo home run to Randy Arozarena with one out in the second inning, thus allowing the Rays to even things up at one run apiece.

The veteran right-hander did manage to get out of the second, but ran into some more trouble in the bottom half of the third when he issued a leadoff walk to Kevin Kiermaier and plunked Francisco Mejia.

A mental mistake and poor throw from Alex Verdugo on a fly ball to center field off the bat of Brandon Lowe allowed both of those runners to advance an additional 90 feet, and Peacock promptly loaded the bases with one out by walking Nelson Cruz.

Rookie sensation Wander Franco broke the 1-1 stalemate and brought in two of those runners on a hard-hit single to right field that was corralled by Hunter Renfroe, but Renfroe’s throw back to the infield got past Bobby Dalbec, which subsequently allowed both Kiermaier and Mejia to score as opposed to just Kiermaier. Dalbec was charged with a fielding error as the Rays went up on the Sox, 3-1.

Franco’s go-ahead hit also marked the end of the line for Peacock, who got the hook from Red Sox manager Alex Cora while leaving runners at second and third base with one out in the third. The 33-year-old hurler finished with a final pitch count of 48 — 25 of which were strikes.

In relief of Peacock, left-hander Stephen Gonsalves, just selected from Triple-A Worcester, officially closed the book on Peackock’s night by allowing both runners he inherited to score on a wild pitch and Austin Meadows RBI single.

Gonsalves then plunked Arozarena to put runners at first and second, and Yandy Diaz took full advantage of that by blooping a softly-hit, 73.7 mph two-run double in between Yairo Munoz and Renfroe in right field.

Kiermaier proceeded to strike out on a foul tip to end the inning, but the damage had already been down since the Red Sox suddenly found themselves in a 7-1 hole.

To his credit, Gonsalves — in what was his first major-league outing in nearly three years — tossed two additional scoreless frames to keep the deficit at six runs through the end of the fifth.

Kyle Schwarber trimmed that deficit to five runs at 7-2 by crushing his 28th homer of the season off Yarbrough to lead off the top of the sixth, but Tampa Bay responded by getting that (unearned) run back off Phillips Valdez on an HBP, Dalbec fielding error, and sacrifice fly in the bottom half of the frame.

Valdez managed to keep the Rays off the scoreboard in the seventh and eighth innings, while Rafael Devers pushed across another run as he collected his 97th RBI of the year in the top half of the eighth.

Matched up against Rays closer Andrew Kittredge, Devers came up to the plate representing the tying run with two outs and runners at first and second. He fanned on four pitches to cut the rally short as 8-5 would go on to be Tuesday’s final score.

With the loss, the Red Sox fall to 75-59 on the season while dropping 10 full games back of the Rays for first place in the American League East. Boston began the month of August trailing Tampa Bay by just 1/2 a game for the top spot in the division.

Tuesday’s defeat also wraps up a disappointing August in which the Sox went 12-16, marking the first time this season they finished a month with a losing record.

Next up: Sale vs. Rasmussen to begin September

The Red Sox will turn to ace left-hander Chris Sale on Wednesday night as they look to put an end to this three-game skid and start the month of September on a positive note. Rosters on Wednesday will expand from 26 players to 28 players for the remainder of the season.

Wednesday will mark Sale’s fourth start of the season since returning from Tommy John surgery on August 14. It also represents his toughest test thus far considering the opponent he will be going up against.

The Rays, meanwhile, will send right-hander Drew Rasmussen to the hill as they go for yet another series victory over their division rivals.