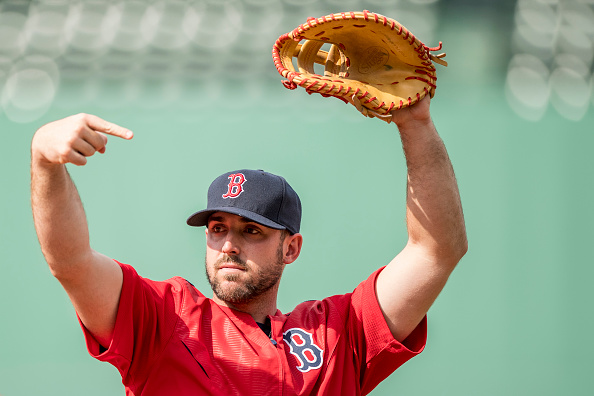 Ahead of their three-game series against the Yankees that begins in the Bronx on Tuesday, the Red Sox made a series of roster moves during their day off on Monday.

First off, infielder Travis Shaw was added to Boston’s major-league roster, while both outfielder Franchy Cordero and catcher Connor Wong were optioned to Triple-A Worcester.

Secondly, utility man Marwin Gonzalez was released after he was designated for assignment on Friday, the club announced earlier Monday night.

Shaw was claimed off outright waivers by the Sox from the Brewers on Sunday and was promptly added to Boston’s 40-man roster since they had an open spot after placing left-handed reliever Josh Taylor on the COVID-19 related injured list that same day.

The Red Sox originally selected Shaw in the ninth round of the 2011 amateur draft out of Kent State University, and the left-handed hitter spent the first two seasons of his major-league career (2015-2016) with Boston before being traded to Milwaukee in December 2016.

After bouncing around between the Brewers, Blue Jays, and Brewers again, Shaw was ultimately placed on outright waivers by Milwaukee this past weekend.

The left-handed hitter had slashed .191/.279/.337 with eight doubles, six home runs, 28 RBI, 14 runs scored, 19 walks, and 51 strikeouts across 56 games (202 plate appearances) with the Brewers this season prior to dislocating his left shoulder in early June.

Sent out on a rehab assignment with Triple-A Nashville on July 27, Shaw hit .273/.415/.485 with two home runs and eight RBI over 11 games (41 plate appearances) with the Sounds before losing his spot on Milwaukee’s 40-man roster.

In claiming the 31-year-old off waivers, the Red Sox add another left-handed power bat to the mix that has proven capable of playing first base, second base, and third base over the course of his big-league career.

“He’s a good kid, he’s a good guy,” Sox manager Alex Cora said of Shaw on Sunday. “We’re going to use him the right way. I think he gives us more weapons to maneuver over nine innings. We can pinch-hit, we can platoon, we can do a lot of things with him. Looking forward to seeing him and start working with him.”

A noted fan of former Cleveland Cavaliers star LeBron James, Shaw — a native of Ohio — will don the No. 23 in his second stint with the Red Sox.

In order to make room for Shaw on the major-league roster, Boston only had to send down one player, but instead optioned two in Cordero and Wong.

Cordero, who was recalled from Worcester on July 22, appeared in 13 games during his second stint of the season with the Sox. Over the course of those 13 games in which he made starts at first base and in left field, the 26-year-old went 7-for-32 (.219) at the plate with seven singles, three runs scored, two walks, and 14 strikeouts.

Wong, meanwhile, was recalled from the WooSox on Sunday as part of the same series of moves that saw Taylor head to the COVID-19 related injured list.

The fact that Boston optioned the 25-year-old backstop back down to Worcester — and thus trimmed down their big-league roster to 25 players for the time being — would seem to indicate that they are hopeful that Taylor will be cleared to return to action on Tuesday, though that is no sure thing.

If Taylor were to be activated before Tuesday’s doubleheader, though, the Red Sox would need to clear a 40-man roster spot in order for him to be added back to the major-league squad.

In addition to the possibility of Boston getting Taylor back this week, they will also be adding right-hander Tanner Houck as the 27th man for Tuesday’s twin bill at Yankee Stadium.

Though Cora has yet to officially name starters for the upcoming doubleheader, the expectation seems to be that Houck will start one game while fellow righty Nathan Eovaldi will start the other.

Finally, we arrive at Gonzalez, who was released three days after being designated for assignment on Friday — at the same time Kyle Schwarber was activated from the injured list.

The versatile 32-year-old initially signed a one-year, $3 million deal with the Sox back in late February, but never really found his footing at the plate with his new club.

Despite providing value as a switch-hitter who could play multiple defensive positions, Gonzalez hit just .202/.281/.285 with two home runs and 20 RBI in 77 games (271 plate appearances) with Boston prior to losing his roster spot.