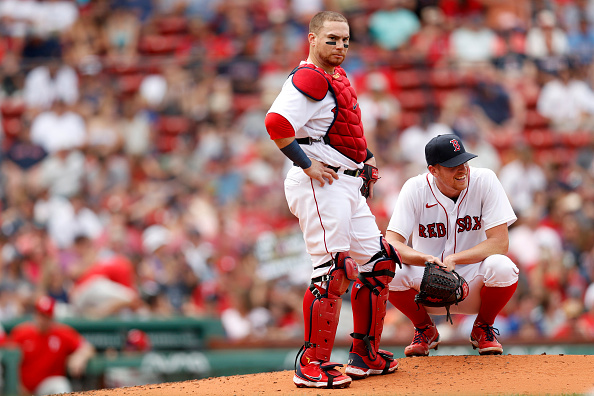 The Red Sox capped off the first half of their season in disappointing fashion on Sunday afternoon, as their comeback attempt against the Phillies fell short in the form of a 5-4 defeat at Fenway Park.

Xander Bogaerts provided the Sox with an early 1-0 lead by crushing a solo home run — his second in as many days — off Phillies opener Brandon Kintzler in the bottom of the second inning, but that would prove to be the only lead Boston would enjoy on Sunday.

That being the case because Red Sox starter Nick Pivetta got rocked for five runs — four of which were earned — on four hits and two walks to go along with four strikeouts on the afternoon.

Facing off against his former team for the first time since being traded last August, Pivetta likely had revenge on his mind, and it looked like things were going to go his way when he retired the first six batters he faced in order.

The third inning, however, was a different story for the right-hander, as he issued a one-out single to Ronald Torreyes to break up the perfect game before walking Travis Jankowski on 10 pitches and subsequently recording the second out.

Just two strikes away from escaping the jam, Pivetta gave up a hard-hit single to J.T. Realmuto that undoubtedly would have plated one run, but wound plating two on a throwing error made by right fielder Hunter Renfroe.

That sequence saw the Sox’ one-run lead turn into a one-run deficit at 2-1, and the Phillies tacked on even more off Pivetta in their half of the fourth when Torreyes deposited a two-out, three-run homer over the Green Monster, making it a 5-1 contest in favor of the visitors.

Pivetta’s day came to a close after he recorded the final out of the inning, as the 28-year-old finished his outing having thrown just 76 pitches, 48 of which went for strikes. In addition to taking the loss to fall to 7-4 on the year, Pivetta also raised his ERA on the season up to 4.30.

While Pivetta certainly put his side in a less-than-ideal spot, the Red Sox bullpen picked things up the rest of the way, as the likes of Yacksel Rios, Darwinzon Hernandez, Hirokazu Sawamura, Adam Ottavino, and All-Star Matt Barnes combined to toss five innings of scoreless baseball.

That said, the Boston lineup was unable to get anything substantial going offensively, though they certainly had their chances to do so.

After falling behind 5-1 in the fourth, the Sox countered in their half of the fifth by plating a run of their own an RBI groundout off the bat of Alex Verdugo, cutting the deficit down to three runs.

An inning later, Boston threatened once more, this time driving in a pair on back-to-back run-scoring knocks from Bobby Dalbec and Christian Arroyo off Phillies reliever Jose Alvarado to trim Philadelphia’s advantage to just one run at 5-4.

Fast forward to the eighth, and it looked as though the Red Sox were in a prime spot to turn this game on its head, as the bases were loaded with two outs for Verdugo, who was matched up against left-handed reliever Ranger Suarez.

Suarez wound up winning that particular left-on-left battle, though, as he got Verdugo to weakly ground out to second to extinguish the threat.

In the ninth, Suarez was at it again even while going up against the three most dangerous hitters in Boston’s lineup. The lefty punched out J.D. Martinez and Bogaerts, then got Devers to ground out to first to preserve the 5-4 victory for his side, as well as a 5-4 loss for the Red Sox.

All in all, the Sox went 1-for-9 with runners in scoring position on Sunday and left 10 men on base as a team.

With the loss, the Red Sox fall to 55-36 on the season and end the unofficial first half of the campaign having dropped four of their last five. They do remain 1 1/2 games up on the Rays for first place in the American League East

Marwin Gonzalez was originally in Red Sox manager Alex Cora’s lineup at first base and batting out of the eight-hole, but was forced to exit in between the second and third innings after re-aggravating his right hamstring while running out a ground ball.

A trip to the injured list for the veteran utility man seems likely, per Cora.

Next up: All-Star break

The Red Sox will be off for the next three days on account of the All-Star break.

Xander Bogaerts, Rafael Devers, J.D. Martinez, Nathan Eovaldi, and Matt Barnes will enjoy the festivities in Denver this week, while the rest of the team will prepare for a four-game series against the Yankees that begins in the Bronx on Thursday night.

Left-hander Eduardo Rodriguez is slated to get the ball for Boston in the series opener, while New York has yet to name a starter.