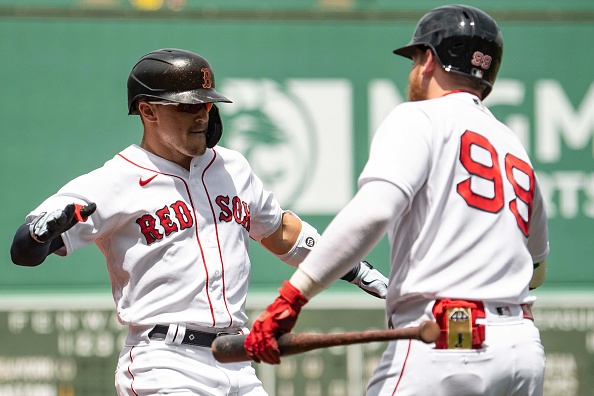 Kiké Hernández was back in the leadoff spot the first time in nearly two weeks at Fenway Park on Sunday, and he did not waste any time in getting the Red Sox on the board.

Matched up against Yankees ace Gerrit Cole, Hernandez greeted the right-hander in the first inning by depositing the first pitch he saw — a 96.3 mph fastball on the inner half of the plate — 379 feet over the Green Monster for his seventh home run of the season and his second of the leadoff variety.

A hard-hit double from Alex Verdugo followed by a seven-pitch walk drawn by J.D. Martinez kept the pressure on for Cole, and Rafael Devers took full advantage of that by crushing a 100 mph fastball down the heart of the plate 451 feet over everything in right field.

In the third inning, Cole fell victim to the long ball once more, this time with Martinez leading things off with his 15th homer of the season — a 421-foot blast to dead center that increased his side’s advantage to five runs.

Christian Vazquez added on to that with a sacrifice fly later in the frame that brought in Bogaerts from third, and the Sox were off to a 6-0 start against one of the best pitchers in the American League.

Given all that run support to work with, Eduardo Rodriguez was able to settle in and put together his second straight quality outing when going up against a divisional foe.

Making his 15th start of the season on Sunday, Rodriguez twirled six solid innings, allowing just two earned runs on five hits and zero walks to go along with eight strikeouts on the afternoon.

For the first time this year, the left-hander got through five innings without yielding a run, as the only two he gave up came on a two-run shot off the bat of Aaron Judge in the top half of the sixth.

After getting taken deep, however, Rodriguez rallied and retired the last three hitters he faced in order to end his day on a more positive note.

Finishing with a final pitch count of 96 (62 strikes), the 28-year-old hurler mixed in a healthy diet of fastballs, cutters, changeups, sinkers, and sliders en route to inducing 11 total swings-and-misses while topping out at 95 mph with his heater.

Ultimately improving to 6-4 on the season in addition to lowering his ERA to 5.83, Rodriguez’s next start should come against the Athletics in Oakland on Friday, the first day of July.

The Boston bats got one of the two runs Rodriguez gave up back in the seventh, with Devers collecting his fourth RBI on a hard-hit single that plated Devers. They tacked on two more on a Vazquez solo homer and Hernandez RBI double an inning later.

The Red Sox bullpen, meanwhile, preserved Rodriguez’s valiant effort. Darwinzon Hernandez ran into some trouble in the seventh, but Garrett Whitlock was able to bail him out by escaping a bases loaded-jam before tossing a scoreless eighth inning as well.

Yacksel Rios got the call in the ninth, and he saw the Red Sox’ 9-2 victory through to its completion by recording the final three outs of the ballgame.

With the win, the Sox finish off their second three-game sweep of the Yankees this month. Boston is now a perfect 6-0 against New York this season.

Having extended their winning streak to three consecutive games, the Red Sox improved to 47-31 (23-17 at home) on the season while moving a half-game ahead of the Rays for first place in the American League East.

Next up, the Sox will welcome the Kansas City Royals into town for a four-game set that begins at Fenway Park on Monday night.

Right-hander Garrett Richards will be getting the ball for Boston in the series opener, while left-hander Danny Duffy will be doing the same for Kansas City.