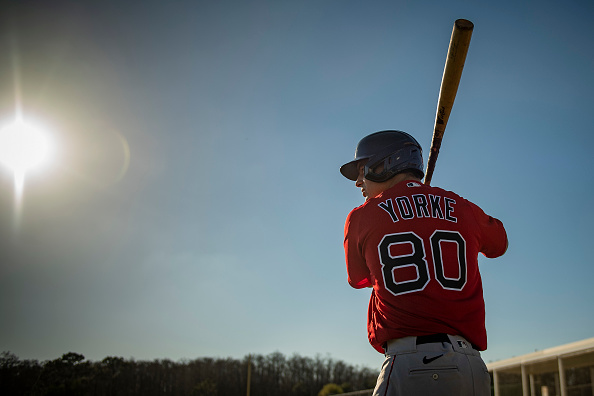 Red Sox infield prospect Nick Yorke moved up to the leadoff spot for the first time in his professional career on Sunday, and the move yielded some pretty encouraging results.

Batting leadoff for Low-A Salem in their series finale against the Fredericksburg Nationals at Salem Memorial Ballpark, Yorke went 3-for-4 at the plate with a double, an RBI, and two stolen bases while scoring three of his team’s five runs in what would turn out to be a 5-0 victory for the Red Sox.

Matched up against Nationals right-hander Karlo Seijas to begin things on Sunday, the right-handed hitting Yorke led off the bottom of the first by reaching base on an infield single. He stole second base moments later and eventually came into score on a sacrifice fly off the bat of Jaxx Groshans.

In the third inning, Yorke took advantage of a one-out triple from Salem’s No. 9 hitter, Dean Miller, and drove the runner in from third on a hard-hit RBI double to the opposite field.

Yorke’s stay on second base did not last long, however, as he successfully stole third and was later driven in on a run-scoring single from Groshans.

Fast forward to the fifth, and Yorke again got things started with a bang, this time leading off the frame with a single to right that would allow him to score on an RBI groundout courtesy of Stephen Scott that same inning.

The fact that the 19-year-old turned in a three-hit performance on Sunday is just the latest example of how Boston’s No. 9 prospect (according to Baseball America) has adjusted to the professional game since making his debut with Salem earlier this spring.

After slashing .195/.264/.228 with two doubles, nine runs, nine RBI, eight walks, 21 strikeouts, and three stolen bases over 21 games in the month of May, Yorke has turned things around for the better a few weeks into June.

Following Sunday’s solid showing, the California native is now hitting a scorching .382/.462/.559 to go along with four doubles, one triple, one RBI, five walks, four strikeouts, and four stolen bases in 10 games (39 plate appearances) so far this month.

Among the top hitters in the Low-A East with at least 30 at-bats this month, Yorke ranks third in batting average, fourth in on-base percentage, sixth in slugging percentage, fourth in OPS (1.021), and seventh in stolen bases, per MiLB.com.

Yorke, who has primarily been playing second base this season, was originally selected by the Red Sox with the 17th overall pick in last year’s amateur draft out of Archbishop Mitty High School (San Jose, Calif).

While the pick at the time was perceived as a surprising one considering where different industry publications had Yorke ranked on their draft boards as well as his commitment to the University of Arizona, the Red Sox viewed the prep infielder as a promising prospect with a legitimate — if not elite — hit tool for his age.

As the youngest player currently at Salem, Yorke has certainly been through his ups and downs while getting his first taste of life as a professional baseball player.

That being said, Sox chief baseball officer Chaim Bloom and Co. believed the 6-foot, 200 pounder could handle the assignment after the way he turned heads at the alternate training site and fall instructional league last year as well as at major-league spring training this year.

It’s still only been just over a month of minor-league baseball, but at the moment, Yorke appears to be making the necessary adjustments to back up why the Red Sox are just so high on him.