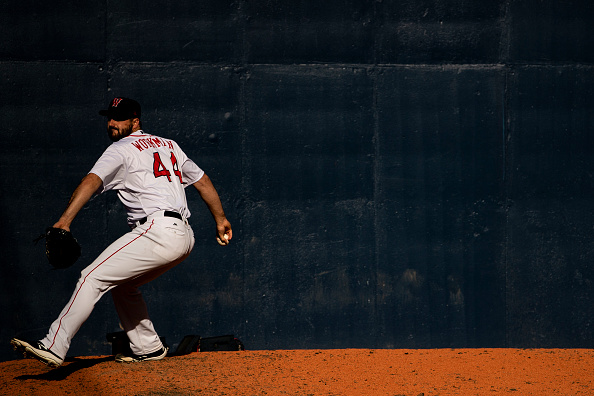 When it comes to their decision regarding what to do with Brandon Workman, the Red Sox are still mulling over their options.

Workman, who triggered an opt-out clause in his minor-league contract with the Sox on Tuesday, threw a bullpen session at Polar Park in Worcester Wednesday afternoon.

The veteran reliever can become a free-agent in the next 24 hours if Boston chooses not to promote him to the major-leagues and instead cuts him loose so that he can pursue opportunities elsewhere.

“I spoke to Chaim [Bloom],” Red Sox manager Alex Cora said prior to Wednesday’s game against the Astros. “Work was going to throw a bullpen today, again. But he’s not there — he opted out. We still got, what? 24 hours to make a decision.”

After inking a one-year deal with the Cubs over the winter and getting released by the club in late April, the 32-year-old signed a minor-league pact to reunite with the Sox last month.

In seven appearances for Triple-A Worcester, the right-hander posted a 1.29 ERA and a 2.75 xFIP while striking out 10 and walking four in seven relief appearances spanning 7 2/3 innings pitched in the month of May.

“His last two outings were outstanding,” WooSox pitching coach Paul Abbott recently said of Workman. “I feel like that was the Brandon Workman we’d seen in the past. I feel like he came here on a mission to show he could be that guy and I think he was more trying to impress, that he has the stuff and was just a little disconnected with his delivery [at first]. The last two outings he got back to where he felt good, he got into his legs better and everything for me ticked up, quality, consistency. I don’t know what’s going to happen with him, but I was really happy with the last two outings, he looked pretty good.”

If the Red Sox opt to promote Workman, they will need to clear a spot on their 40-man roster in order to do so. One possible way to make that happen would be to designate a fellow reliever currently for assignment.

Colten Brewer, who yielded four runs in his season debut against the Astros on Monday, could be the casualty in this scenario depending on which reliever (Brewer or Workman) the Red Sox view as a better bullpen option moving forward.

“We’re going through the process,” said Cora. “We’re talking a lot [about] where we’re at roster-wise, what benefits or doesn’t benefit us. So the conversations are ongoing.”