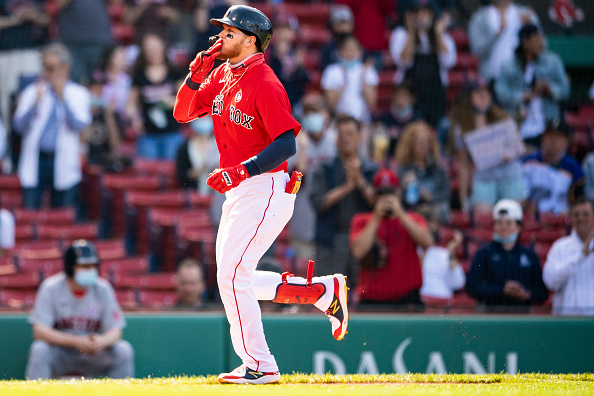 Alex Verdugo celebrated his birthday in style at Fenway Park on Saturday afternoon.

Coming into the day in the midst of a chilly 2-for-24 slump, the newly-turned 25-year-old set the tone for the Red Sox by taking Angels starter Dylan Bundy deep to right field for his fifth home run of the season right away in the first inning.

Verdugo’s solo blast put Boston up by a run early on in what would turn out to be a commanding 9-0 victory over Los Angeles.

As was the case on Friday night, the bottom of the Red Sox lineup continued its recent run of success thanks to the efforts of Bobby Dalbec and Franchy Cordero on Saturday.

Dalbec added on the Sox’ early lead by plating two more runs in the bottom half of the fourth, driving in Xander Bogaerts and Rafael Devers on a sharply-hit double off the base of the Green Monster.

Franchy Cordero followed with a hard-hit double of his own that had an exit velocity of 110 mph and brought in Dalbec from second to make it a 4-0 game.

In total, Dalbec — who now has multiple hits in two of his last three games — and Cordero combined to go 4-for-8 on Saturday with four doubles, two runs scored, and four RBI.

Boston’s No. 8 and No. 9 hitters were not the only dynamic duo the Red Sox rode to a blowout win on Saturday, as the No. 4 and No. 5 hitters enjoyed productive days at the plate as well.

Bogaerts took advantage of Verdugo and J.D. Martinez reaching base with no outs in the fifth by clubbing a monstrous 446-foot three-run shot over everything in left field to give his team a 7-0 lead.

Devers, meanwhile, wrapped up the scoring for his side and put the finishing touches on this one when he crushed his team-leading 10th home run of the season to right-center field in the seventh.

Backed by an offensive outpouring, Martin Perez had plenty of run support on his way to tossing six solid innings in his eighth start of the season.

Over those six frames, the left-hander kept the Angels off the scoreboard while scattering three hits and four walks to go along with five strikeouts on the afternoon.

For how shaky of a first inning Perez had by issuing two walks to the first three hitters he faced, he settled in nicely and wound up retiring 14 of the final 18 Angels who came to the plate against him.

Finishing with a final pitch count of 97 (60 strikes) while getting through six full innings for the first time this season, the 30-year-old hurler threw 31 cutters, 24 sinkers, 21 changeups, 11 curveballs, and 10 four-seam fastballs. He topped out at 95.1 mph with his heater.

Able to pick up his long-awaited first win of the season in addition to lowering his ERA to 3.40, Perez’s next start should come against the Phillies in Philadelphia next Friday.

In relief of Perez, the three three relievers the Red Sox turned to were able to see the club’s second shutout of the season through to its completion.

Despite dealing with their collective fair share of traffic on the base paths, Phillps Valdez, Darwinzon Hernandez, and Austin Brice combined to toss three scoreless frames to secure the 9-0 victory for the Red Sox.

Next up: Going for the sweep

The Red Sox will go for the series sweep over the struggling 16-22 Angels and their fourth consecutive win overall back at Fenway Park on Sunday afternoon.

Right-hander Nathan Eovaldi will get the start for Boston in the series finale, and he will be opposed by left-hander Jose Quintana for Los Angeles.