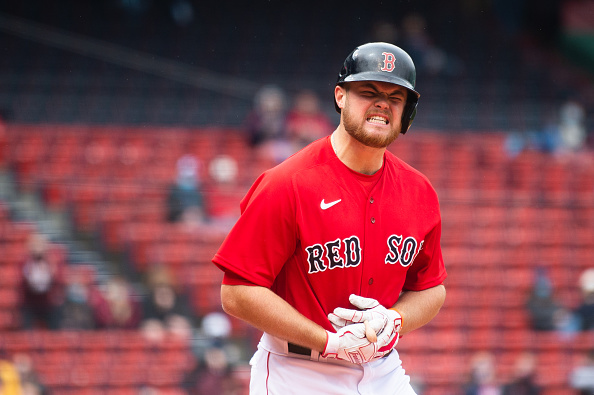 In the first inning of the Red Sox’ 5-3 victory over the Mariners on Sunday, a scary moment arose with Christian Arroyo at the plate.

With one out and the bases loaded in a 4-1 game, Arroyo took a 1-2, 93.8 mph fastball from Drew Steckenrider off his left hand.

After pausing for a moment, the right-handed hitting infielder was clearly in pain as he shouted out and eventually went to a knee to assess the damage upon removing one of his batting gloves.

The fact Arroyo was experiencing that much discomfort prompted Red Sox manager Alex Cora and assistant athletic trainer Masai Takahashi to pay him a visit on the field.

Arroyo was able to remain in the game at second base, but it was apparent his left hand was still bothering him throughout the afternoon given how often he looked at it and was flexing it to evaluate his situation.

As soon as Sunday’s contest came to a close, the 25-year-old got X-rays on his hand, and those X-rays have since come back negative.

“[It] hurt pretty bad. But he was able to play defense,” Cora said of Arroyo during his postgame media availability. “I told him just, ‘Don’t worry about your at-bats. If you can play defense, just grind it out.’ And he did.”

Arroyo, who the Sox claimed off waivers from the Indians last August, does have a history of hand issues.

In 2017, when he was still a top prospect in the Giants organization, the Florida native missed the final two months of the minor-league season after sustaining a fractured left hand on a hit-by-pitch.

Taking that point into consideration, the Red Sox will likely want to see how Arroyo is holding up on Monday (an off day), and again on Tuesday before determining if he will be available for Tuesday night’s series opener against the Mets in Flushing.

The former first-round draft pick has been solid in his first full season in Boston, slashing .296/.345/.426 with seven doubles and four RBI over 17 games while primarily playing second base.

As noted by The Boston Globe’s Alex Speier, Arroyo wasn’t even in Cora’s original starting lineup for Sunday’s finale against the Mariners.

Alex Verdugo was initially going to start in center while Enrique Hernandez was going to start at second, but due to wet conditions on a rainy day in the Fenway area, Verdugo was scratched approximately one hour before first pitch on account of the hamstring cramp he had sustained on Saturday.

“He was in the lineup but then obviously the conditions weren’t perfect,” said Cora in regards to Verdugo. “(Head trainer) Brad (Pearson) came down and talked to me a little bit about it. So I decided to scratch him.”

With Verdugo scratched, Hernandez moved to center, which led to Arroyo getting the unexpected start at second.