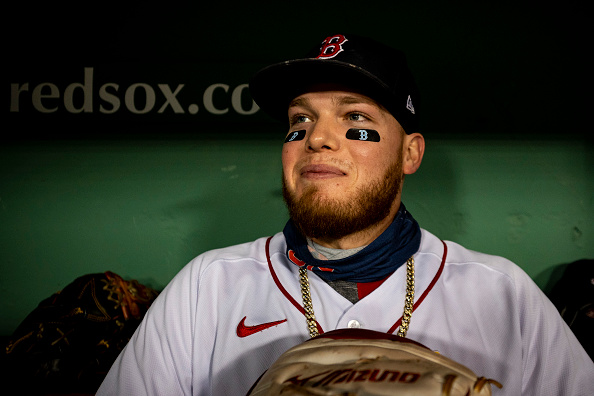 Last year, Red Sox outfielder Alex Verdugo went through something for the first time as a major-leaguer in that he played for a team that failed to qualify for the postseason.

Prior to getting traded to Boston last February, the 24-year-old had been a part of three straight National League West-clinching Dodgers teams from 2017-2019.

Although he never appeared in a postseason game as a member of the Dodgers, Verdugo still worked hard to reach that ultimate goal of being a member of the last team standing come late October.

So when Los Angeles finally ended their 32-year World Series drought this past fall while Verdugo was at home watching his former teammates celebrate that accomplishment, it was a bit weird for the former Dodgers top prospect.

“I’m happy for the guys,” Verdugo said Thursday when speaking with reporters via Zoom. “It’s a bittersweet moment because at the same time, I want that ring. I want to be a champion, but I think things work out for reasons.”

While the Red Sox may have struggled to the tune of a 24-36 record in Verdugo’s first season with the club, the left-handed hitter did enjoy success on an individual level in 2020.

“Coming over here and being with Boston and being with the staff and the teammates, and how I feel like I get along and jell with the guys, I think the fit here is better,” said Verdugo. “I think this is where I was supposed to be, and I think it’s going to make it even more special when we do get that ring and we win it here.”

Having said that, Verdugo — who was selected by Los Angeles in the second round of the 2014 amateur draft — still enjoyed seeing some of his old friends like Cody Bellinger, Edwin Rios, and Walker Buehler win it all considering the fact they all grinded through the minor-leagues together not too long ago.

“It was fun. I still got a lot of friends over there,” he said. “Still had some guys that you root for and at the end of the day, I put a lot of blood, sweat, and tears, into the minor-leagues to get into the bigs and play next to these guys. To see their dreams come true, it’s amazing.”

As the Dodgers head into the 2021 season coming off their first World Series title since 1988, Verdugo hopes the Red Sox can meet them in the Fall Classic once more to get a little retribution sometime in the near future.

“Now, it’s just, hopefully we see them and we get to beat them and get a little satisfaction that way,” said Verdugo.