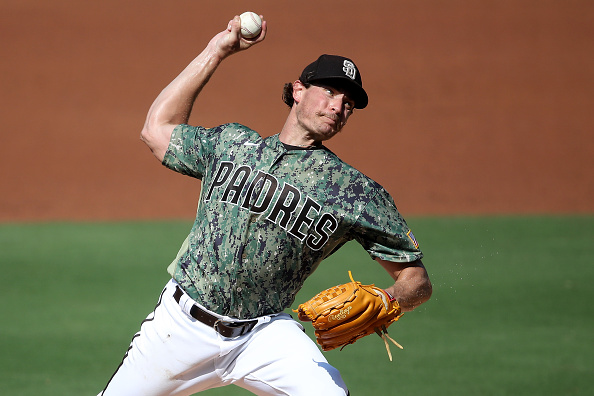 When the Red Sox agreed to sign veteran right-hander Garrett Richards to a one-year, $10 million contract last month, they did so knowing there would be some risk involved.

Excluding the pandemic-shortened 2020 season, the last time the 32-year-old accrued more than 150 innings pitched in a single campaign came in 2015 when he was a member of the Angels.

In July 2018, his season was cut short due to right elbow UCL damage which would require Tommy John surgery that same month.

Since successfully recovering from the elbow reconstruction, Richards has technically not missed a beat, though he’s made just 17 appearances (13 starts) — all with the Padres — at the major-league level dating back to late September 2019.

The fact that Richards had quality stuff — and quite frankly has had quality stuff since being selected by the Angels in the first round of the 2009 amateur draft — last year made him appealing to a lot of clubs this offseason, the Red Sox included.

“Stuff-wise, for me, he was one of the best in the league,” Red Sox manager Alex Cora said of Richards’ career when speaking to reporters via Zoom earlier Saturday. “He’s been hurt, but what I saw last year with the Padres was eye-opening. I’m glad that he’s with us. This is a guy that when we talked to him during the offseason, he feels that there’s more. For how veteran he is and his age, he hasn’t wasted too many bullets, right? Because he’s been hurt.”

In Cora’s praise of Richards, the 6-foot-2, 210 lb. righty also drew comparisons to a key member of Boston’s World Series-winning team in 2018 in Nathan Eovaldi.

The Sox acquired Eovaldi in late July of that season, a little less than two years after the flame-throwing right-hander had undergone Tommy John surgery for the second time in his baseball career. He went on to produce a 3.33 ERA over 12 outings (11 starts) and 54 innings to close out the regular season for Boston and a 1.61 ERA over six outings (two starts) and 22 1/3 innings in the postseason.

“It’s pretty similar to what we got in ’18 with Nate, when we traded for him,” said Cora Saturday. “A guy that has been hurt, but we knew at that time that he was going to be okay. Stuff-wise, off the charts.”

While Richards, like Eovaldi, has the potential to do some special things on the mound in 2021, one thing that cannot be ignored about his addition is the veteran presence he provides, especially with the uncertainty stemming from the ongoing pandemic.

“He’s a good teammate, too,” the Sox skipper confidently stated. “He was in a winning situation last year with the Padres and it’s good to have him around. With all the guidelines and everything because of the virus, it’s not that easy to get the groups together like we usually do in meetings to meet people. But, little by little, we will get to know him — we’ll get to know all of them — and he’s somebody that I’m looking forward to pitch every five days and see where he can go.”

Because Cora, who talks to the media first every day, mentioned Eovaldi when praising Richards, the 31-year-old Sox starter, who also spoke to the media on Saturday, was asked about the rotation newcomer and how their situations compare in regards to overcoming injuries.

“Early on, getting to see him throw a couple bullpens, his stuff is so electric,” Eovaldi said of Richards’ pitch repertoire. “The slider, the changeup, the fastball. It all comes out of the hand really well. He’s got a little bit of a different delivery, I think, but he looks great coming into camp. I’m excited to have him here.

“And then getting over the hurdles, I think you just build off of each start,” he continued. “You continuously build, you build that confidence up. I think him being here, our pitching staff, having [pitching coach Dave Bush and bullpen coach Kevin Walker] around, I think that’s going to help him out a lot. Just mainly using his strengths when he’s pitching and just keep attacking.”

At the moment, both Eovaldi and Richards are slated to crack the Red Sox’ Opening Day starting rotation. I would pencil them in to be the team’s No. 2 and No. 3 starters at this point, but that’s really more of a guess than anything.