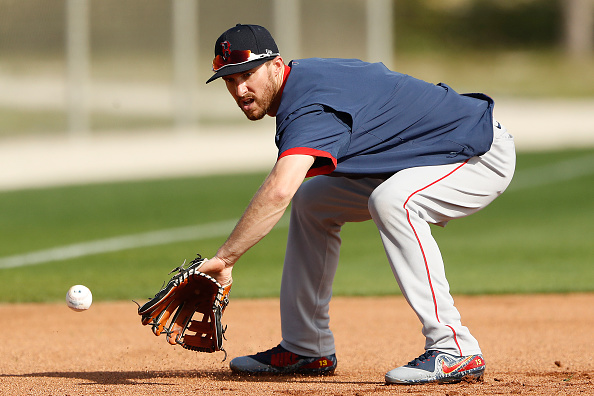 Lost in the madness that saw Francisco Lindor get traded to the Mets and Tomoyuki Sugano return to Japan, former Red Sox farmhand Jantzen Witte signed a minor-league contract with the Seattle Mariners on Thursday night.

Witte, who turned 31 on Monday, was originally selected by Boston in the 24th round of the 2013 amateur draft out of Texas Christian University.

Before the 2020 minor-league season was lost due to the ongoing COVID-19 pandemic, the infielder had put together a solid 2019 campaign between Double-A Portland and Triple-A Pawtucket.

Over 118 total games with both clubs, Witte posted a .271/.333/.390 slash line to go along with nine home runs and 51 RBI on the year while seeing time at first base, second base, third base, left field, and even an inning of mop-up duty on the mound.

Perhaps even more important than his play on the field, though, is the fact that the Dallas-area native had proven to be a vital veteran presence for some of the organization’s younger minor-leaguers. And he did so while seemingly being on the cusp of getting called up to the majors.

The Athletic’s Chad Jennings highlighted this trait of Witte’s in a fascinating story back in March, in the middle of the first version of spring training.

“He’s a freaking really good player,” Red Sox prospect Bobby Dalbec said of Witte, his spring training roommate, when speaking to Jennings. “And he’s a glue guy for a clubhouse. So, those guys are special … He’s a really good balance of care-free, but still getting his shit done when he needs to get his shit done. Never says a mean thing.”

In addition to Dalbec, Sox minor-leaguers such as Josh Ockimey, C.J. Chatham, and Chad De La Guerra, all of whom have shared the infield with Witte at one point in their professional careers, had positive things to say about their teammate as well.

Chatham: “He’s the guy you go to when you’re not sure if something is right or wrong. There’s little things in baseball that can annoy people that (you don’t know) when you’re young. You just ask him, and he always has the right answer.”

De La Guerra: “I think he’s probably the biggest clubhouse guy, the most important one, for Pawtucket. He’s super popular. I think everybody sees him the same way. He’s just one of those guys. He’s probably even seen the same as the coaching staff. There’s no difference.”

Before becoming a minor-league free agent in November, Witte was one of the last members of the Red Sox’ 2013 draft class who was still with the organization, as noted by SoxProspects.com’s Chris Hatfield.

Witte originally signed with Boston for significantly less than $100,000 as a fifth-year senior out of TCU. He appeared in 661 games across six minor-league levels spanning seven seasons as a member of the Red Sox.

All the best to Witte as he embarks on this new chapter of his career with the Mariners. It would appear that he will have the opportunity to remain in the game even after his playing days come to an end.